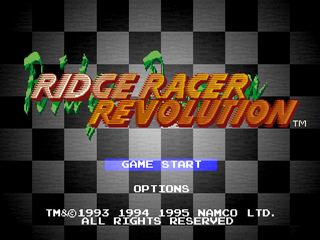 If any game ever demonstrated the difference between arcade and home gaming it was Ridge Racer. Released in the arcades just as the obsession with polygon games was taking hold, it went down a storm, especially if you were lucky enough to happen upon the enormous version complete with a full-size car to sit in (a Mazda MX5/Eunos Roadster, I believe, which doesn't suit the game really). However, upon receiving a hasty conversion for the PlayStation's launch, the shortcomings of Namco's racer were all too obvious to everyone but the biggest graphics tarts. Yes, it looked nice - nicer than the rival Saturn version of Daytona USA - but the pitiful one-and-a-half courses got old very quickly, and that's if you even liked the game to begin with which I didn't thanks to its stupid twisty-twirly car handling. What this game needed was a sequel.

It received one very quickly too, exclusively on the PlayStation, and titled Ridge Racer Revolution, which already sounded promising. Apart from the crap car handling, the problems with the PlayStation version of the original game were mainly down to the rush in trying to get it ready for the console's launch. Namco no longer had that excuse and many gamers were expecting the super-duper version they had started yearning for soon after buying and subsequently getting bored of the first game. It didn't take me long to realise, however, that sadly it had not arrived with this game which is more of an update than a full sequel. Indeed, at times it's actually difficult to tell the two games apart unless you know what to look for (a slightly different on-screen display, for instance) and consequently Revolution suffers from the exact same problems as before to one extent or another.

There are three options to choose from - Race, Time Trial, and Free Run. The first of these is the arcade mode and consists of the same sort of 12-car race as the first game. The same cars are available to choose from and they they all drive in the same (idiotic) way as before. About the only real difference between the games are the courses. Here you get three to choose from: Novice, Intermediate, and Expert, although, again, the latter two are based on the first but with 'extra' bits, and there are also mirrored and reversed versions of each as well. One of the few good things I'll say about Ridge Racer is that, even though it only had one (and a half) courses, it was a very good, memorable course. The one(s) here is/are less impressive, mainly because it's very similar to the first. To a non-super hardcore fan of the first game (like me), some sections look as though they could've even been lifted directly from it. I'm sure they weren't - even Namco aren't that lazy - but the fact that it even occurred to me illustrates how similar the games are!

Both have a starting grid flanked by grandstands full of spectators, both have their first corner inside a tunnel (both are left-handers too) above the entrance to which is a small video screen showing old Namco arcade games, both have lovely beach-side sections with palm trees, both have steep uphill sections through rocky hillsides, both have rather uninspiring walled areas on their later incarnations, etc. I'm sure you get the point anyway. Jeez! Driving around them is also the same as before which includes the annoying 'bump, bump, bump' near the sides of the course whether it's sheer rock or a tame grass verge, and that seems like really unsophisticated game design to me. Even the accompanying music here is hideous - more so than ever, to my ears at least! Basically then, as if you couldn't guess - if you liked the first game you should like this too. For the rest of us though, the 'revolution' that was so needed after the first Ridge Racer definitely did not arrive with this game.