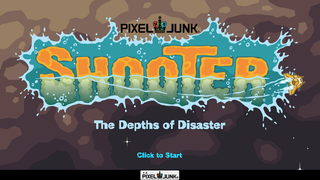 My knowledge of the modern game scene is slowly improving but back when I first got my PS3 I knew about as much as a blind octopus. The whole PSN, downloadable indie games thing was new to me then, but upon my first browse through the ominous PlayStation Store, I kept seeing games with 'PixelJunk' in their name. As primarily a retro gamer I like pixels so I decided to take a look at one of them and, as a shmup fan, the choice of which one to plump for was easy - PixelJunk Shooter. Despite featuring a name as generic as most other PixelJunk games, it still had to be a shoot 'em up, surely? And that meant it was already awesome, potentially at least! I still had no idea what to expect though...

A clue came from the back-story which isn't much more creative than the name but does set up an appealing-sounding adventure. It's set in the distant future by which time mankind has expanded into the stars and colonised many new worlds. Resources are running low, however, and huge trans-galactic corporations are launching ever-riskier expeditions in search of the next big supply. Encountering one such expedition is your ship, the ERS Piñita Colada, whose mission is to investigate a distress signal coming from an unknown planet. You can undertake the mission solo or take a wingman, but in either case there are fifteen stages in total, spread equally over three 'episodes' which each represent a different depth of the planet.

The first two of these - S.O.S. and Fire and Ice - consist of a series of caverns beneath the surface of the planet, the former featuring mostly rocky areas and the latter icy areas, while the third and final episode - Mine Complex - takes place within the super-deep mining facility that was (presumably) the culmination of the expedition to start with. Many hazards can be found within these caverns such as hostile creatures and automatic defences like wall-mounted guns, but the most dangerous aspect is that posed by the natural elements themselves, namely water, lava, ice, gas, and a mysterious black liquid, all of which interact with your ship as well as each other in a variety of interesting - and potentially perilous ways.

The water and lava is found in all episodes, most often in pools here or there (or occasionally pouring through gaps). The former is not harmful (you can even fly around in it) but the latter is fatal to touch. Even being near it will raise your ship's temperature and if it gets too high you'll plummet to the ground in flames! Flammable gas is also found seeping into many of the caverns which also heats up your ship, albeit much slower, but if it touches any lava or fire, it will ignite which has a much stronger warming effect! Luckily, in either case you can cool off at any time with water. Many parts of the caverns that form the first episode consist of soft rock which can be shot and doing this often causes pools of water and lava to mix. When this happens they form more soft rock which can then also be cleared.

The second episode introduces ice which can't be shot and therefore forms barriers in many places it's found, but it can be melted by the searing lava. If ice is formed within a body of water, it will quickly spread until the whole pool is ice, and if your ship is trapped you'll lose a life. The Mine Complex of the final stage introduces another new element - a strange black liquid which in most cases is found in large tanks or pouring into them from chutes. This weird stuff is magnetic and as such it gloops in the direction of your ship if you fly near it. It's nearly as dangerous as lava if it touches you, too, and produces lots of hot flammable gas when it comes into contact with water, much like in the screenshot above in fact!

Despite being set within a series of caverns, this isn't a 'gravity game' where you have to constantly thrust to stay in the air - I guess that's done automatically since the planet clearly has gravity - your ship instead merely hangs in mid-air when you're not moving around, and you can do this as much as you want since there are no time limits. Flying around is simple and intuitive though, thanks to a small and manoeuvrable ship and great controls - the left stick controls the direction the ship moves in, the right stick controls the direction it faces, and pressing both in the same direction makes it move faster. The only armaments it can use are those that come as default - a rapid fire cannon, fired by pressing the right shoulder button, and missiles, fired by holding down the same button, and both are unlimited.

It can also perform a spinny attack and the left shoulder button fires a short-range grapple which is used to collect items and rescue the many stranded scientists who are dotted around the stages which are split into several smaller stages themselves, each of which is usually around two to four screens wide and/or high. You can move around them freely but they're designed in an approximately linear way, and once you've located and rescued all the scientists, the exit will open and it's on to the next! Each stage also features one 'special' scientist identified by his different colour (all the 'normal' scientists are yellow) and the fact that he/she is waving a flag. In addition to giving you some lovely points, collecting these guys also reveals a short monologue detailing recent events on the planet.

It's pretty easy to accidentally kill the scientists though, either by shooting them or exposing them to the aforementioned elements (water doesn't hurt them but the rest do), and if you lose more than five of them in one stage, it's game over. However, also sprinkled around the stages and released by destroyed hostiles are small orange things called Star Coins. Collecting a hundred of these will reduce your 'casualty counter' by one, which is handy, and also to be found here and there are diamonds of which there are a set number per stage (usually hidden), and shields which protect against the heat of lava (although you'll still die if you actually touch it) and will also take a hit for you from any of the enemy creatures or guns.

In addition to all this, some stages later on in the game feature devices which equip your ship with a new 'suit'. The first of these is the 'Magma Suit' which replaces your standard cannon with a lava-spewing equivalent - very handy for melting ice! The next one is the 'Water Suit' which, as well as allowing you to shoot water, also gives you a special grapple to pull chunks of obstructive ice out of the way. After that you'll find the 'Inverter Suit' which swaps the effects that water and lava have on your ship - i.e. lava is safe, water kills you (which takes some getting used to, believe me!). The last of these rather unusual upgrades is the 'Anti-Magnet Suit' which, as you may have guessed, reverses the effect the magnetic liquid has on your ship, repelling it instead of attracting it.

The stages themselves are home to a few features as well. The first episode introduces the uncommon Fluid Slug which is a round device you can pick up and drop in any liquid which will then be absorbed. Picking it up again causes the liquid to start pouring back out, so it's basically a way of transferring liquid from one place to another. The second episode features a few lasers which, as well as heating up your ship, also melt any ice they touch, and helpfully there are often a few mirrors around to reflect the beam to your suiting. The final episode, being an industrial complex, is full of more gadgets than both the previous episodes combined. Here you'll find twirly cogs, switches, doorways, electrical beams, high-powered magnets, and several other troublesome automated contraptions too.

Indeed, there's a lot to Shooter for what is basically... well, a shooter. The graphics aren't tremendously varied but, being a fairly recent release, everything is in lovely high-def and looks great. There's some nice attention to detail, too, and the behaviour of the liquids in particular is superb - they not only look cool but they all sploosh all over the place very realistically as well. The music is also fantastic, consisting of a full soundtrack composed by Alex Paterson (of The Orb fame) and Dom Beken which features a variety of styles ranging from ambient/trance to Spanish guitar. This stuff is all just a bonus though - the secret behind Shooter's splendour is simply its near-flawless design.

Control of your ship is superbly implemented and very precise and I particularly liked that you can fly around freely without worrying about time-limits or anything, but the most impressive aspect of the game is its stages which are all very well designed and immensely enjoyable to play through. For example, you find some scientists trapped in a cave covered with lava. If you shoot your way down to them they'll be immediately killed by the onrushing substance. So what to do? I won't spoil it but the puzzles aren't too taxing, and help can usually be found nearby. Not all the native lifeforms are hostile, for instance, with some even offering fluidic solutions of their own. It's not a very tough game generally, really. The boss battles at the end of each episode are probably the biggest challenges.

All of the stages are memorable in their own right though. The new features are gradually introduced from one to the next and if you're unsure of how to use them, the game will give you a hint. But my very favourite thing about Shooter is its extensive use of the various 'elements' and the surprisingly accurate science in their motion and interaction. Some complained of the game's fairly short length but, considering its quality and amazing price (it's little over £6 here in the UK), I can't possibly bring myself to complain. There really is nothing to complain about either, if you ask me. As well as being original, creative, and great fun, there's also loads of secrets and collectibles to keep you coming back as well. It might not have the greatest name but Shooter is the best game I've played for a long time...