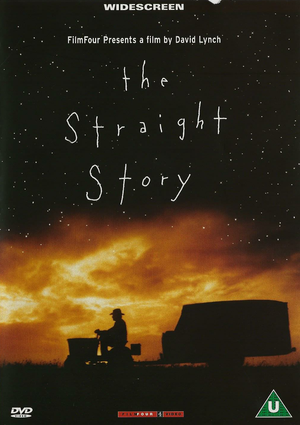 David Lynch's name may be synonymous with the likes of Twin Peaks, Blue Velvet, and Mulholland Drive amongst others, but my favourite film of his has always been The Straight Story. Unlike most of his output thus far it's fairly straightforward and it's also based on a true story - that of Alvin Straight, a pensioner from America's Midwest who embarks upon a remarkable journey. Alvin (Farnsworth), you see, grew up very close to his brother, Lyle (Stanton), and they remained close for much of their lives until an unspecified bust-up sent them their separate ways. Ten years later and the two are still not talking. However, news reaches Alvin that Lyle has had a stroke. Motivated to salvage their relationship, Alvin decides to visit his brother, but this is not nearly as easy a proposition as it might seem.

He lives in Laurens, Iowa with his daughter, Rose (Spacek), but Lyle now lives in Blue River, Wisconsin - some 240 miles away. Alvin is 73 years old and not in particularly good health even for his age. His eyes aren't great so he can't drive but he doesn't like other people driving for him either. His solution? Build a makeshift trailer and tow it all the way to Lyle's place with his battered ride-on lawn mower which is nearly as old as he is. Yes that's right - he drives over two hundred miles on a lawn mower, at a maximum speed of 5mph. Needless to say, it takes him quite a while! Most of the route is along quiet rural roads, through seemingly endless countryside, but Alvin still manages to encounter a variety of unusual characters.

Along the way he meets a teenage runaway girly, a sizeable group of cyclists, a friendly priest, and a kindly couple who take him in while his lawn mower is undergoing some much-needed repairs. He leaves behind some notable friends and acquaintances in Laurens too, but it's Alvin himself who predictably occupies virtually the entire length of the film, and the late Richard Farnsworth gives a truly wonderful performance - occasionally heart-wrenching but always mesmerising. I suppose any lead film role would be demanding for a 78 year old (for that was his age at the time of filming), so the job he does is impressive enough just for that, but it's an even more staggering feat when you learn that he was suffering from terminal bone cancer throughout the shoot as well.

Whether he's 'punishing' his first lawn mover for breaking down, sharing traumatic war stories with a stranger, or simply chugging along through the picturesque Midwest wilderness offering wise words to all he encounters, his stubborn determination in not only reaching his estranged brother, but doing it his way, by himself... it really is inspiring. Every time I'm being lazy, this film pops in my head and I immediately feel guilty! It's the kind of film whose premise you'd probably dismiss as ridiculous if you didn't know that it's a true story. That immediately makes such a bizarre journey more interesting, but on reflection it's much more than just a remarkable snippet of a determined man's life. It's also the story of a remarkable man determined to tell his story, or at least that of those few weeks so late in his life, and it's all the more poignant for it. A film that will stay with you long after the credits roll.

Special Note: Sadly, despite his incredible effort in getting this film made, the pain of his illness proved to be too much for Richard Farnsworth and he took his own life the year after it was completed...