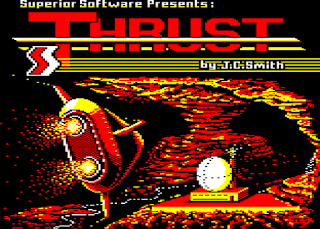 I don't think it is particularly unfair to say that the BBC was never really considered a 'proper' gaming system by most players of the day, but of the games it did host, one of the best known must surely be Thrust. It's a little odd since it isn't an exclusive, but it was originally made for Acorn's iconic micro prior to being ported to several other systems and it remains best known there as well. As you might have gathered from its inclusion in this series of features (as well as its name), Thrust is a gravity game not entirely dissimilar to the likes of Gravitar, and like Atari's classic, players find themselves in command of a small, roughly triangular vessel which is slowly falling towards the landscape below. Using it, your mission is to assist 'the resistance' in its fight against the evil Intergalactic Empire by collecting 'Klystron Pods' which are needed to power their 'battlegrade starships'. 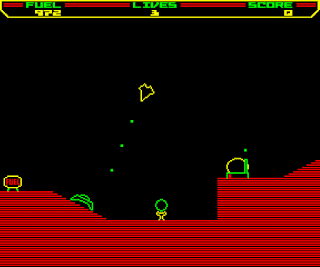 There is one of these pods located on each of the six barren planets that make up the game, but they are heavily defended as you might imagine. The first is on the surface and protected by only one 'Limpet Gun' but subsequent pods are found at the end of underground passageways with ever-increasing numbers of guns lining their routes. These are controlled by a 'nuclear power plant', and by shooting this a few times you can temporarily disable the guns. Be careful though as shooting it too much will cause it to go critical, and that will end your life pretty sharpish! Fortunately, you can also take the guns out with a single shot from your pea-shooter cannon, but your ship is equally susceptible to their shots too, as well as the planet's surface/walls, and you only have three lives with which to complete your mission. You do get an energy shield (which doubles as a tractor-beam) which will protect you from incoming fire but it will do nothing if you crash into... well, pretty much anything, and like most games of this type you have finite fuel which is used by the shield as well as your ship's thrusters. 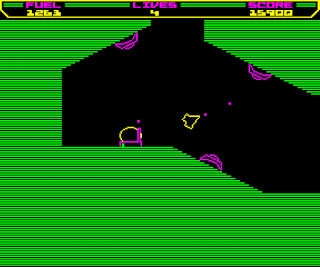 More fuel can be found in canisters here and there and it's very wise to pick it up (carefully) using your tractor beam, and it's using this that you will also need to pick up the pod too. Once grabbed it is tethered to your ship. Then, just head back to the surface, fly off into the stratosphere, and that's the planet (stage) complete. It's a bit more complicated than that, though. Since the pod is tethered rather than stowed, it can and does swing around as you 'thrust' backwards and forwards through the caverns and passageways, and this can greatly hinder the precision of your movements. In fact, it's very easy for the swinging pod to put you into a wall, and if the pod itself touches anything it will bring you down with it! Indeed, you might've thought that it's the getting to the pod and taking out the guns that is the hard part (and it is pretty tough) but this return journey with the pod is even tougher after the first couple of stages. 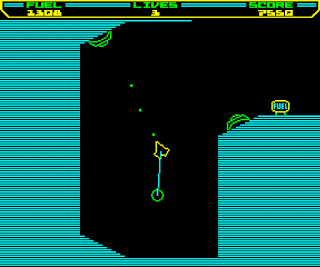 This toughness is part of Thrust's charm but it can often make the game rather frustrating as well. Persistent players will soon clear all six stages anyway though, and will then face the same stages but with the gravity reversed! If that's not tough enough, get through those and you'll have to do it again but with invisible walls (except if you use the shield). After that, it's reversed gravity and invisible walls. Arrghh! I can't imagine too many players will get that far though - I certainly can't - but it is great fun and very addictive while it lasts. The aesthetics are simple - the audio consists of no more than a couple of effects and the almost-monochrome graphics vary little aside from their colour from stage to stage - but they do their job of mimicking the vector-based origins of the genre well, and the ship/pod-related physics are superb. It's true that a few more unique stages would've improved longevity (and surely it wouldn't have been too hard?) but it's still easy to see why Thrust is so fondly thought of, especially by BBC fans.