As a gamer, have you ever been in that situation where you don't really know what to play, or perhaps don't even necessarily feel like playing something, but are bored and/or feeling a bit down and need to cheer yourself up? Sure you have, everyone has, and I'm no different. There are a few games which I rely on during these times. Not many, mind you, but the one I've found myself returning to time and time again since I reviewed it last year is the awesome Test Drive Unlimited. 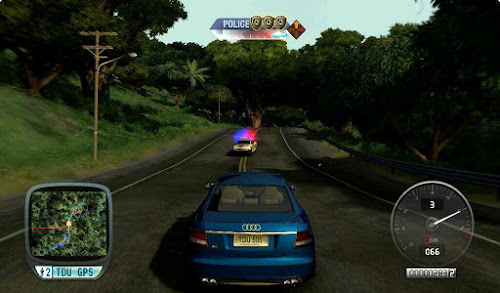 An open-world game it may be, but it still has structure and objectives. Thankfully, however, there are no real time-restrictions or limitations on when you should do this so one of my favourite antics has become thus: set off from my lovely home, smash into a few innocent road-users to get the attention of the local law enforcement authorities, and then spend as long as possible avoiding capture!

This is of course something that is also possible in several other games - the Grand Theft Auto series springs immediately to mind - but I've never enjoyed it as much as I do here. That's possibly because the police in TDU aren't armed (or at least don't use their guns) and you can't just get out of your car and run down an alleyway or something - once you've angered the fuzz, it's entirely down to you and your driving skills as to how long you can keep yourself out of the slammer. 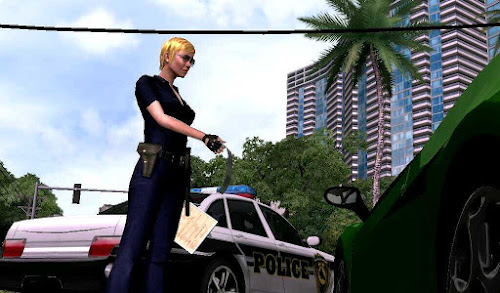 This occurs when you find yourself stationary in the immediate vicinity of any police car(s), either by their hand (if they manage to stop you) or your own (if you simply crash very close to them). In my case, it's usually the latter that ends my fun, most often happening as a result of my attempts to avoid the former - those fine men and women of the Hawaiian Police Department sure are a determined bunch!

The lengths they go to will depend on how much of a pain in the ass you've made of yourself. You don't need to obey any driving laws which means you can go flying through town at 200+ mph, weaving in and out of traffic and running red lights if you want to - it's making contact with other drivers that gets their attention. So if you are trying to play the game properly it's probably best to avoid them. 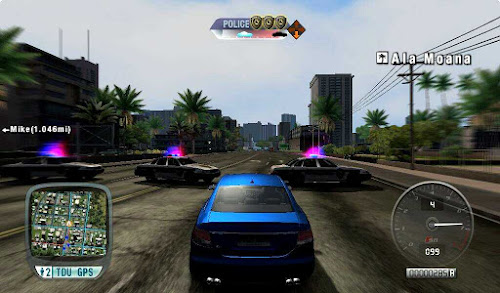 But for the purposes we are exploring today, they are all fair game. If you just knock into a couple of them, the police will make a half-assed attempt to catch you before calling off their pursuit, but if you slam into car after car, you'll soon find the entire might of the HPD bearing down on you. They will attempt to ram you off the road, catch you out with roadblocks, and even drive at you head on.

Then there are the ones behind, chasing you, waiting for you to make a mistake so they can pounce. In fact, there can be so many rozzers chasing you that pursuits can end up being rather short on occasion, but whether that's the case or not, the thrill of the chase, or being chased, of screeching round corners, crashing through roadblocks, forcing cop cars into lampposts, or even seeking an emergency off road time-out... it really is quite exhilarating, and pretty soon I've usually forgotten all about my real world problems and woes, even if just for a little while. 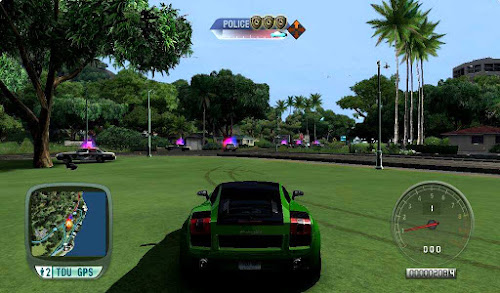 Of course, these irresponsible antics can cost a lot of in-game dollars (and I mean a lot!) in fines when you got caught, and it would be a shame to waste all those hard-earned riches that had been earmarked for a new house or that rare supercar you had your eye on. Splendidly, however, if you don't have any money, you go to jail instead, and thanks to the game's accelerated clock, you only have to stay there for 30 seconds before you're unleashed to cause more mischief!

The game has often done its job by that stage though, with my sombre demeanour lifted for the time being, but it never hurts to give it another go anyway! It's a sign of the game's quality really, that it can be so absorbing when played properly, but also so much fun to just mess around too, and that makes it a rare and precious part of my collection, and I suppose one of my favourite games as well.

Admittedly these antics aren't that much of a 'memory' as I've only been playing the game for a couple of years but it's definitely a game with many memorable moments and I've a feeling I'll continue to enjoy it for a long while yet too. But what about you fine fellows? Do you have a 'go to' game when you're feeling low and needing a bit of a boost? If so, what does the trick for you?