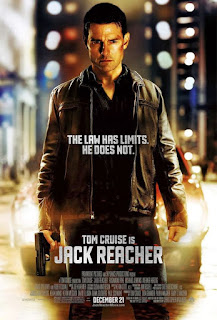 Tagline: "The law has limits. He does not.

I'd never heard of the Jack Reacher books I must confess but there is apparently a whole series of them (some 21 so far). They are centred around the titular character who was a Major in the US Army Military Police Corp until he suddenly quit, instead choosing to live on the road as a drifter, taking odd jobs when and where necessary, and occasionally helping out in suspicious or dangerous situations. This is the first such film to be based on those books and stars Tom Cruise as the hero in question who is called upon by James Barr (Sikora), a former US Army sniper who has supposedly just shot and killed five people on a peaceful riverside in Pittsburgh. However, although he knows of Barr from his time in the army, Reacher isn't friends with him, isn't sure why he has been requested, and has no interest in clearing him. 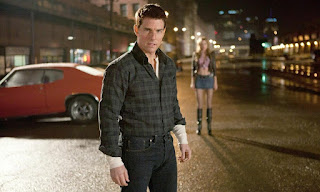 He is keen to see all the evidence against him anyway though, but is only granted access to it by Barr's attorney, Helen Rodin (Pike), if he also agrees to become her lead investigator. Naturally, Reacher proves to be highly proficient at this, quickly discovering the true motive for the seemingly-random killing spree and the underlying conspiracy that the deaths were meant to cover up. All he has to do is take out the bad guys! They are headed by Zec, a former Russian prisoner who is played, somewhat surprisingly, by Werner Herzog of all people. I don't think I've ever seen him in an acting role before but if this performance is anything to go by he's certainly adept at portraying a chilling, intimidating villain! 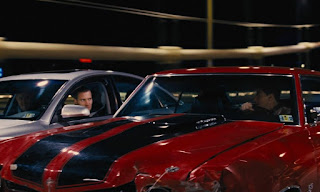 Also featuring in the decent cast are Jai Courtney as Zec's head henchman, David Oyelowo as the detective in charge of the case, Richard Jenkins as District Attorney and Helen's father, and there's also a welcome appearance from Robert Duvall as the grizzled old owner of a gun club and shooting range that was frequented by the alleged perpetrator. All are perfectly suited to their roles too, as is Pike as the no-nonsense attorney lumbered with the seemingly-unwinnable case. Cruise, on the other hand, I'm not so sure about. As someone who hasn't read any of the books, he seems like a good fit for the role. He plays tough well despite his non-towering stature and we all know he's not afraid of getting knocked around. 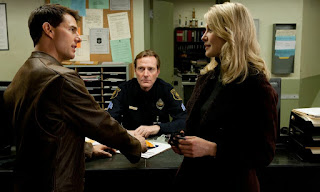 Indeed, his Reacher is the kind of investigator who's happy to break some bones - or even worse - if it gets to the truth. He is also very charismatic and comes across as just as supremely confident, even arrogant, as you would expect a 'legend' like Reacher to. On the other hand, fans of the books and even their author Lee Child were far from convinced with the final casting choice. Book Reacher is apparently 6ft5in and some 250lbs after all. Supposedly, though, there weren't any suitable Hollywood 'name' choices of that size (what about The Rock?), but I'm not complaining, and neither should anyone else who isn't a die hard fan of the books. Cruise films rarely disappoint and this one doesn't too much either. Technically it's great. The pacing is decent and it's well directed by McQuarrie (who has worked with Cruise before on Valkyrie), and features a nice mixture of dramatic scenes and action set-pieces. The initial shooting scene is superbly presented and there are numerous other memorable scenes including an amusing barroom confrontation and superb climax in a rain-lashed quarry. At the same time though, there really isn't much to the story besides the odd twist, and there's nothing here we haven't seen a hundred times before, but the Cruise factor helps it stand out. Jack Reacher still might not satisfy existing fans of the character but the rest of us have a solidly-entertaining if undazzling crime drama to enjoy.