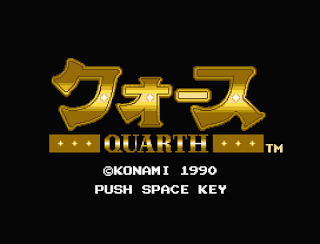 Near enough every game over the years has been fairly recognisable as belonging to one particular genre or another but there have also been quite a few hybrids too. That is, games that result from the fusion of two or more often very different genres. Some of these have been pretty weird but I can't think of many stranger unions than a block falling puzzler and a shoot 'em up, but that's exactly what we have here courtesy of Konami! No doubt there is some peculiar back-story intended to explain the weird set-up but since most versions of the game were Japanese exclusives (all but arcade and Game Boy I believe), it's hard to say. All I can tell you is, it places you in control of a somewhat bulky blue spacecraft located at the bottom of the screen (you actually get to choose between four craft but it makes no difference) which apparently achieves flight by way of an angel attached to either side!

Whichever one you choose (based only on its appearance I guess!), you can move it left and right only, and can shoot small square blocks up the screen. Falling towards you from the top are various strange shapes that look like they might've been constructed from leftover Tetris pieces. If any of them reach your ship, you may be shocked to hear it's game over. Happily, there is a way to prevent this - you will need to 'square off' each of the falling shapes, i.e. turn them into filled-in squares/rectangles using your block-shooting ship. Completed shapes will vanish but more incomplete shapes continue to appear from the top of the screen, inching their way downwards as you try to banish them. The longer you last, the higher the 'level' you'll reach. In other words, Quarth is basically a cross between Tetris and Space Invaders!

It might sound rather weird, and I guess it is a bit, but it's also about as simple as any other block-falling game. There are ten stages per level and the descending shapes get faster and more numerous the further you get, as you'd expect. On occasion a grey shape appears which clears the screen once filled in, but that's about all the variety you can expect. Messing too much with a format like this and making it too complicated can be risky though, and could sour the most important ingredient; namely, that addictiveness! Some other aspects of the game are a bit disappointing too, so it's even more important to get the particulars spot on. The graphics, for example, aren't great. The arcade version wasn't exactly a looker to begin with but this version lacks its backgrounds which is strange since they were far from complex to begin with.

Still, what is here does the job well enough. The few colours are vivid, there is some nice (if quiet) music twinkling away in the background, and very importantly the controls and accuracy of the shot/block placement is spot on. The last thing you need is squiffy shooting mechanics leaving you with stray misplaced blocks and even more work to do. That still happens due to player error of course, and when it does it makes things even more frantic than they can quickly become anyway! Happily it doesn't get super-tough really quickly like some block games, though, and it is indeed very addictive as I hoped it would be, but even if you were to tire of solo play, there are great co-op and versus two-player modes as well. More varied and detailed graphics would've been nice but other than that it's hard to fault Quarth and its unusual combination of genres. Definitely worth a try for both shmup and puzzler fans.