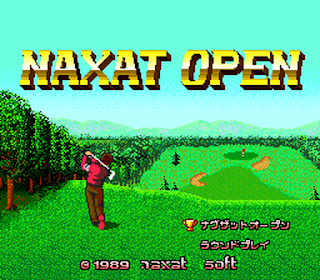 The mighty PC Engine is positively heaving under the weight of shoot 'em ups and arcade conversions of other types so it's not really the first console to come to mind when it comes to golf games. There are actually a few though, and since the Naxat name is a favoured one here in RKS Land, I thought I'd look at this one first. Typically, it's very simple and arcadey, offering two modes of play - Stroke Play and Match Play (probably - the choices are in Japanese) which are single and multi player modes (up to four) respectively. You get to choose your name, your handicap rating (in Match Play), and a set of clubs, and then you're off. The two controller buttons work as 'select/action' and 'cancel/back' which makes playing the game just as quick as getting started - you just choose the direction you want to hit the ball, choose a club (if you don't want to use the default), and take a swing. 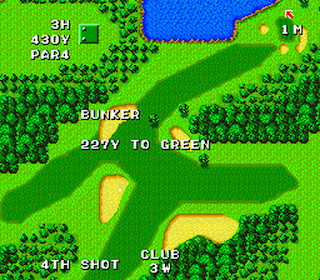 I had several issues with the game pretty much straight away though, unfortunately. You can take a look at the course before lining up your shot but not when you're actually taking aim, so you kind of have to remember/guess where you want to hit it. The aim isn't very precise either, consisting of cross-hairs a few pixels from the ball. This would be bearable for an arcadey console golf game but the shot-taking mechanic is pretty ridiculous. As you can probably see from the screenshots, it takes the form of the now-standard system whereby you press the button to start the swing, press again to set the power, then hit again to determine the impact with the ball. This is all fine - I've used this system a million times in other games. Here, however, once you have set the power, the meter swings back down so quickly it's pretty much pot luck whether you manage to stop it in the little red impact zone at all, never mind being able to stop it where you actually want to. 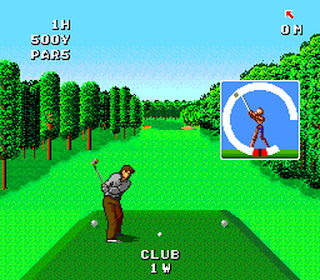 The result of this, for me at least, was a frickin' frackload of missed shots. Hooking or slicing the ball in other games is usually a right pain but here it's a luxury - at least it means you've hit the damn thing! I finished the first hole (a par 5) in thirteen shots. Thirteen! I'm quite confident that's the most I've ever managed in any golf game, even when messing around! It's also not helpful that when you select a club, you aren't given an indication of its power, so for all but tee shots you don't really know how much of the power gauge to use, and that means many wildly over or under hit shots. That's assuming you succeed in hitting the ball at all, obviously. I suppose seasoned golfers will know roughly what sort of distance the clubs are capable of, but even then, achieving any degree of accuracy is going to be a tall order. It's the same with putting which is very much a case of trial and error at first. Suffice to say, with all this in mind, I didn't particularly enjoy playing this one! 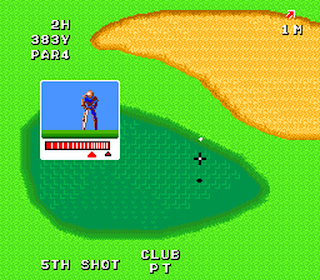 It's not great technically either, in my view. There is one fairly catchy tune that plays throughout but it quickly starts to grate, and there are barely any effects at all. The graphics are a little better - there isn't much variety, obviously, and animation is basic and infrequent, but the actual courses are bright and easy on the eye. I'm really struggling to find many positives here though, I'm sorry to say. It isn't the worst game ever - far from it - but I was disappointed with it to say the least. Maybe it's because of that Naxat name which is so revered among Engine fans, myself included, for the likes of Spriggan, Nexzr, and of course the wonderful Crush pinball games. Maybe it's because most golf games I've played before have been at least pretty good fun, limited or not. This one was irritating, more or less from the first moment I played it to the last, and none of the things that annoyed me were down to technical restrictions. That's just a sign of poor design for me.