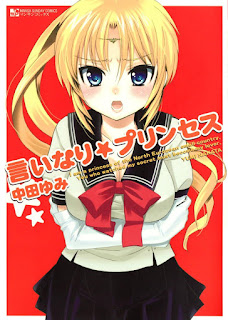 Yet another one of the many things I have been wanting to take a look at for years but never got around to is manga. Recently, however, I received a Kindle Fire tablet as a gift from my lovely wife so I figured it was a good opportunity to try some titles out. I found a good stock of digital examples and pretty much just picked a bunch at random based mainly on the name and cover art. A bit shallow perhaps, but with a handful of exceptions I don't really know of too many, and I couldn't really be arsed to spend time looking into them in advance either. One of the chosen few was Iinari Princess. It isn't the first manga I read but it was the first one I had a strong opinion about, and not a positive one I'm afraid. This was disappointing as it sounded quite appealing from its brief synopsis which has to do with the young lady of the title who is indeed a real live princess. As she reminds us often, she is first princess in line to the throne of the Principality of Rivetaria which is 'a small North European country', and she has, for some reason, transferred to a Japanese school. 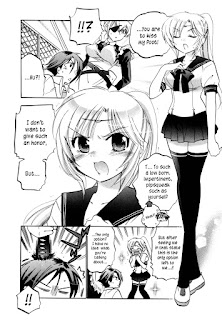 Needless to say, Lena Reena Rene Risheranto, or Lena-sama as most call her, quickly becomes something of a celebrity figure at the school in question. All the male students want to get into her panties, unsurprisingly, but the snooty gaijin isn't interested and just looks down on everyone. She never smiles and isn't friendly to anyone, even the ones that manage to sneak past her loyal and protective eyepatch-wearing, katana-weilding maid/bodyguard who usually scares them off if they get too close anyway. One student who enjoys ogling her 'rockin bod' is Hyuuga who is discreetly doing just that when she thinks she is by herself and lets a tooter rip (i.e. farts). When she notices him she is initially mortified before deciding that since he witnessed her in such an intimate situation (for her standards), she must perform the 'ritual of eternal devotion' with him. It seems like a bit of an overreaction but Hyuuga does little complaining, especially when he finds out it basically means he gets to engage in lots of sexual activity with her, and that's pretty much all they spend their time doing. This may well sound like a pretty good deal for him but it doesn't make for a very engaging manga in my admittedly-uninformed opinion. 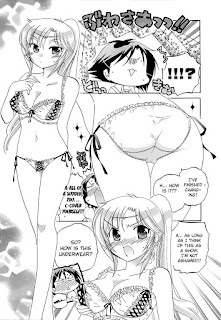 As I've subsequently discovered, it's described as a 'borderline hentai' title, so I guess an engaging story isn't really the biggest priority, but even so, it wouldn't hurt to have some sort of plot or a bit of character development. We've barely met the two of them before their sexual tomfoolery begins and from there it just moves from one scenario to the next with barely anything in between to tie them together. If that sort of thing is your bag then great, but the sexual content isn't very explicit. It focuses on boobs and underwear shots (as you can see to the right here!) and various fondles in those areas, but that's it. Interestingly, considering how pervy it is, it was actually made by a female mangaka (the name for people who draw/write/etc manga), which just goes to show these types of manga are not soley the product of horny guys. Sadly that doesn't make it good in my view. It does have a few funny moments but for the most part it was a bit of a drag. I like ecchi anime - the sexy stuff can work well with either comedy or drama when done right - so I was fairly confident I would enjoy this too, but there's just too much largely meaningless sexual stuff and not enough... well, anything else. If as much effort was put into the characters, this one might've been pretty good, but as it is I'm already looking forward to my next read.

If you want to find out more about Iinari Princess or see other opinions, check out its page here at the splendid My Anime List, the best anime and manga resource on the web :)