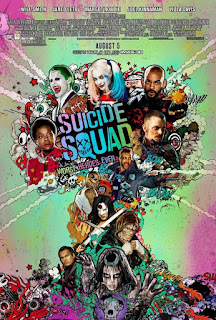 Tagline: "Justice has a bad side."

For their first two 'cinematic universe' movies, DC wisely chose to focus on their two best known characters, but this third offering is a bit different. It features a cast of characters that will probably be mostly unknown to non-comic buffs (like me), and that's a pretty brave move considering how many options they must've had. The characters in question are basically a bunch of the ghastliest supervillains being held in supermax prisons around the US. Rather than waste their 'talents' in squalid 7x12-foot prison cells however, government agency A.R.G.U.S. (kind of like DC's equivalent of Marvel's S.H.I.E.L.D. I believe) feels they could be put to better use as a special task force - the creatively named Task Force X no less - to be used under strict supervision to tackle threats beyond the abilities of the normal agencies. I'm not sure how sensible that sounds but it apparently made a pretty great comic-book series!

I knew the basic premise behind the Suicide Squad going in as it is touched upon in Arrow, a series on which I am quite keen. Both there and here the squad, and indeed Argus itself, is headed by Amanda Waller (Davis) who petitions the powers-that-be for the group's formation. Initially reluctant, they quickly give the green light when a proposed member of the squad, The Enchantress (Delevingne), has a change of heart and decides to destroy the world instead (or something) with the help of her hitherto unseen brother. The first stage of her heinous plan (if she has one) involves destroying lots of stuff, then holing up in Midway City and turning any bystanders into gloopy tar monsters. Egads! This sounds like an ideal chance for Waller to try out her new toy - bring on Task Force X, a.k.a. the Suicide Squad!

The squad consists of Deadshot (Smith), an expert marksman and assassin, Harley Quinn (Robbie), a former psychiatrist and current baseball bat-wielding crazy nutjob girlfriend of the Joker, Captain Boomerang (Courtney), an Aussie thief who uses, umm, boomerangs for stuff, Killer Croc (Akinnuoye-Agbaje), a super-strong reptilian dude with sizeable anger issues, El Diablo (Hernandez), a Latino ex-gangbanger with somewhat excessive fiery issues, Katana (Fukuhara), a martial-arts expert and swordswoman who is the only volunteer on the squad (i.e. she's not a convict), and lastly Slipknot (Beach), a tricksy grappler dude. They're all handy in a tight spot that's for sure, but it's also worth remembering that they're all dangerous criminals, so to ensure their loyalty they're all carrying micro-bomb implants which will be detonated if they make a break for it!

There's nothing like the threat of an exploding head to ensure one's loyalty after all! Even so, someone like Waller isn't going to leave this bunch of psychos to run around unsupervised, so Special Forces colonel Rick Flag (Kinnaman) is the lucky one sent with them (along with some of his men) to make sure they stick to task, and that means... head straight for the big fireworks display being produced by the Enchantress and knock down anything that gets in their way. Accordingly, there is a lot of action here as the squad make their way in perpetual darkness to their goal, and as you would expect from a big-budget superhero movie, the effects are more than adequate. The visual style of the film is also pretty great, partly due to the superb - and award winning - makeup and costumes.

This includes The Joker (Leto) who has been shoehorned into the film, and unnecessarily in my view. He appears mostly in flashbacks, and it's quite cool to see the 'creation' of Harley Quinn but aside from that he doesn't really serve much purpose, in my view at least. He's there pretty much just to have the the Joker in the film, but judging by the reaction of most fans to Leto's take on the character, they might as well have not bothered. I thought he was okay - perhaps leaning toward the unhinged psychopathic a bit too much but he, along with his loopy squeeze, still held my attention more than most of the other characters. Even those who weren't taken by Leto's committed performance, however, must surely concede that Robbie is fantastic as Harley Quinn who is already getting calls for a spin-off.

The rest of the cast are okay, but only okay. No performances are actually bad but none of them or their characters really stand out either, including a very by-the-numbers bad guy (or gal), and I can imagine any of them being played by countless other actors to the same effect. This is especially true of Will Smith who is just... well, Will Smith. Despite a decent opportunity to make his mark in the now-bloated world of superhero movies, he does nothing to make this version of Deadshot his own and doesn't even slightly convince as the cold and ruthless killer he's meant to be. I think I even prefer the relatively unknown Michael Rowe's version of the character in Arrow, and he's only a guest star in a few episodes! Courtney seems to do his best as Captain Boomerang who is used at least partly as the comic-relief character, but he isn't particularly funny and is pretty much useless when it comes to the super-powerful Enchantress. This is also true of most of the other squad members, however.

That is, with the exception of El Diablo who spends most of the film moping about the place before he finally decides to reveal that he's actually (*minor spoiler!*) a giant fire demon (or something)! Even so, it does make you wonder just how much time was spent on the plot here. The premise is paper thin as it is but with so little time devoted to even establishing the characters never mind developing them, you end up not really caring too much about anything that happens and that just makes it... boring, really. Considering how much shooting and exploding there is, that's almost impressive! As many have said before me though, the film's main achievement is showcasing Margot Robbie and her brilliant take on Harley Quinn. I would gladly watch more of her, perhaps with Leto's Joker too, but the rest of them? Well, I won't say they do as their nickname suggests but you get my point.