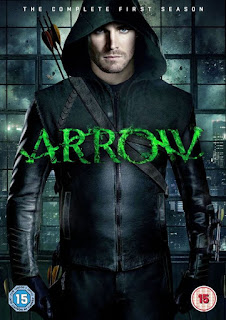 Tagline: "His death was just the beginning."

His name, as you have no doubt been told many, many times if you've ever watched the show in question, is Oliver Queen. It's also a name that will already be familiar to comic book fans the world over. However, as I've mentioned once or twice in my Marvel film reviews, as much as I appreciate the characters, artwork, stories, etc, of many comic-books, I've never gotten around to properly immersing myself in that world. Consequently, the name of Oliver Queen was a new one to me. Thankfully, this show, based on the DC Comics character, Green Arrow, is very accommodating for newbies like me.

The pilot episode opens with an apparently very athletic but scraggly-bearded man sprinting through undergrowth before retrieving a bow and a handful of tatty arrows. Presumably, they were stowed for just such an occasion - namely, a boat is visible just off the coast of what we soon learn is the harsh, uninhabited Chinese island of Lian Yu where the man has been stranded for five long, tough years.

After alerting the boat's occupants to his presence on the isle, Oliver (Amell) is rescued and is soon reunited with his friends and family back in Starling City, USA, where it transpires he's the son of billionaire industrialist and founder of Queen Consolidated, Robert Queen, who was on a boat trip with him and his girlfriend's sister, Sara Lance (oh noo, bad idea!), when they were wrecked in a storm. Oliver was the only survivor, having made it to Lian Yu in a small life raft, but not before his father confessed that he had 'failed their city' by way of his many shady business practices and by associating himself and his company with some even shadier people and practises. He implores Oliver to survive, return home, and 'right his wrongs' by saving the city from the crime and corruption that now infests it.

Each episode from the second onwards includes an intro which give you the low-down from the man himself: "My name is Oliver Queen. For five years I was stranded on an island with only one goal: survive. Now I will fulfill my father's dying wish. To use the list of names he left me and bring down those who are poisoning my city. To do this, I must become someone else. I must become... something else."

Soon after his return to Starling it becomes clear Oliver was quite the local celebrity before his ill-fated trip, and well-known as a brattish, irresponsible, immature playboy, but the Oliver that has returned is quite different. I suppose five years is a long time, but even so, the new Oliver seems to be almost the exact opposite of the one that left, and he has also gained some remarkable abilities. Not like super-human abilities, you understand, but he's in peak physical condition and has been trained in the use of the bow and arrow as well as other weapons and numerous fighting techniques to devastating effect. In other words, he's now a one-man army and the many criminals and corrupt businessmen of Starling City are his quarry, most of whom comprise the names in his father's old secret notebook.

At first, it's this notebook which forms the basis of Oliver's mission. While becoming reacquainted with his loved ones including his mother (Thompson), younger sister Thea (Holland), best friend Tommy (Donnell), and now ex-girlfriend Laurel (Cassidy), in his spare time he is also secretly creeping around the city in his hooded, masked costume, crossing a name from the book's list by either 'persuading' or forcing the person in question to mend their ways, generally one each episode.

And in between events in Starling City we also get regular flashbacks to Oliver's time on the island; what happened to him there and how he returned such a changed man, both physically and personally. As you might've guessed, this time was just as dramatic as those in the present day are, and he didn't spend much of it alone either. He first meets Yao Fei (Mann) and later Slade Wilson (Bennett), both of whom contribute greatly to his reconditioning. Even a familiar face shows up too. Back in Starling City it isn't long before Oliver - both his normal and secret personas - attract the attention of the police, and one detective in particular. Indeed, Detective Quentin Lance (Blackthorne), Laurel and Sara's father, is determined to catch the vigilante menace he's dubbed 'The Hood', but he also wants some answers from Oliver about his younger daughter's death.

Oliver's quest is at first carried out in the utmost secrecy but it's not long before he's acquired a little help, first in the form of John Diggle (Ramsey), the ex-military bodyguard assigned to him by his worried mother, and later Felicity Smoak, the quirky but supremely talented IT technician working at Queen Consolidated, and the three of them are soon making short work of the criminals in Starling City.

Having a 'criminal of the week' isn't likely to keep things interesting for too long though, and sure enough, as the season progresses and more of the arcing plot is revealed, it seems as though certain people know more about Oliver's accident and subsequent disappearance than they're letting on. References to a grand 'undertaking' begin to reach his ears and a rival emerges in the form of the 'Dark Archer' who, unlike all the other buffoons taken out by The Hood so far, may have abilities matching or even exceeding those of our hero himself. Of course, this is all probably very familiar to fans of the comic-book, but if my understanding is correct, there aren't a great deal of them, at least compared to other DC or Marvel heroes, and it's likely this was all pretty new to most viewers as it was for me.

I can't therefore comment much on how well cast most of the parts are in terms of comic-book accuracy (though let's face it - most of the fanboys would've moaned anyway), but I can say that most of them suit their parts here very well. Some of them, such as John Diggle, party-buddy Tommy, and Oliver's immediate family, were created specially for the show, while others are based only loosely on their comic-book counterparts, but none are poor or seem out of place.

Okay, some can be a bit annoying now and then such as the self-righteous Laurel and whiny Thea but mostly they're fine. Stand-outs for me include Paul Blackthorne's driven-but-flawed Detective Lance and Emily Bett Rickard's innocent Felicity whose many inappropriate innuendos as well as subsequent awkwardness provides much of the comic relief in the show, but a lot of the credit should go to the main man himself, Stephen Amell, whose manages to portray both sides of Oliver (pre and post-island) convincingly. I believe it's his first proper lead role but you wouldn't know it - he's charismatic and holds the screen well, and he's in great shape too, which helps a lot as far as adding a bit of realism to the the extravagant action scenes in concerned, and he seems to pull them off with ease.

Most of the action and combat is of fantastic quality too, movie standard even. The choreography is often creative and almost always superb, and it's shot very well. There are very few confusing close-ups or shakey handheld-cam shots here. Some scenes can be pretty violent too. There's not much blood 'n' gore but 'The Hood' doesn't hesitate to kill when necessary - something which causes Detective Lance's condemnation of his actions more than anything else.

Aside from Felicity's tomfoolery, it's actually a pretty serious show for comic-book standards. There's plenty of drama and emotional involvement in addition to the lashings of action and there are always things going on that maintain that air of mystery to keep you interested. The motives and agendas of some characters are rarely as clear cut as they might seem, for example, Oliver included. At the same time it's not a show that takes itself too seriously either - there are more than a few rather implausible coincidences and some of Oliver's gadgets seem a bit silly.

It's all good fun though, and when there are two different time-lines being explored at once there's definitely more than enough to keep all but the pickiest of long-time fans and newcomers-alike happy. Unlike a lot of new shows, Arrow grabs you from the first episode and ends up an exciting and satisfying début season that seems like the beginning of a fantastic show. Let's hope they keep it up!