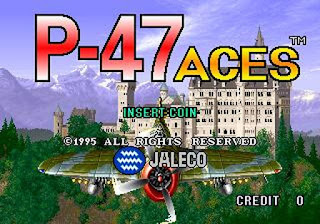 There's nothing particularly ground breaking about P-47 but for some reason it's still a shmup I greatly enjoy, so imagine my delight at hearing about this less-well known sequel. Like the first game, it's a horizontal-scroller and appears to be set during the same sort of time period (1940's). The story plunges you (and a friend, for it supports two players) smack in the middle of whichever war is currently raging (probably WWII) with little explanation other than orders to neutralise specific 'enemy' targets. There are eight stages in total, standing between you and whatever your ultimate objective is (the total destruction of the enemy and their devastating machine of war, presumably?) and, as seems to be customary with shmups from the mid-90's onwards, instead of merely having one lone hero with an 'advanced prototype' aircraft to do this with, you get the choice of four pilots, each with their own unique bucket of bolts to steer through the carnage.

Each of the craft has two types of weapon that fire simultaneously with a single button: air-to-air (i.e. forward shot), and air-to-surface (i.e. bombs). The first of the four craft available, the Thunderbolt, is the one from the first game. It is average in most respects and is armed with a spread shot and bombs that fall slightly ahead of it. The next craft, the Black Widow, appears to be the most popular. It is armed with a narrow forward shot as well an additional shot that fires down at a 45° angle, while its bombs are semi-homing in that they gravitate in the general direction of enemies rather than homing in directly. The third craft is a slow-moving biplane called Swordfish which features a narrow forward shot as well as a spread of homing rockets and drops splendid cluster bombs, while the last craft, the Spitfire, is the smallest and easily the fastest and possesses a wider forward shot and devastating bombs that cause multiple explosions along the ground.

Despite not being hugely different to one another, I found it tough to settle on any one particular craft. All of them have at least one major strength that proves very useful and each is very formidable once powered-up. The craft all have five power-levels for each of their weapons and some enemies, most often the larger ones, release the relevant power-ups when they're destroyed - the 'A' icons increase the air-to-air attacks by one level and the 'S' icons do the same for the air-to-surface attacks. All four aircraft also carry a small stock of screen-shaking super-bombs and these can also be topped up by collecting the 'B' icons. All of these armaments combined give you a pretty effective means of smacking up the enemy, and they do all unleash significant fiery fury after a few icons, but this is still a very tough game - much more so than the first P-47 if you ask me.

The enemies just consist of all the usual suspects - aircraft of many shapes and sizes including waves of small fighters and fewer-but-larger bombers and gunships fill the skies, and the ground features a good few tanks and stationary gun emplacements. You get a (very) short briefing before each stage advising you what to concentrate on (on the first stage you have to take out tanks, the second stage bombers, for example) but as with most shmups, it's best just to blow the crap out of everything you can. This may seem reasonably easy at first but it quickly becomes apparent that the bullet-count here is going to be high. We're not quite in bullet-hell territory but the enemies, particularly the larger ones, have a crap-load of ammo. Fortunately their shots are brightly coloured and so are easily visible, at least most of the time, but they're often fast and quite large too.

That 'most of the time' can cause more than a few problems though. The graphics here are really quite superb for the most part and include some lovely backgrounds, with the action passing through lush countryside, rocky canyons, dense forests, bustling cities, and frozen mountain valleys. While not particularly original, they are very realistic and really nicely drawn. Similarly, the sprites aren't hugely creative but look authentic enough and are animated pretty well for a shmup too. The bosses are mostly larger versions of normal enemies such as tanks, bombers, choppers, etc, and include two 'battleship' stages, but they also look great and are nicely detailed. Some aspects of the presentation aren't great though - the font used on the title screen looks like it was added using the text tool on Photoshop or something - but the main problem is the pyrotechnics.

Your own craft and all the enemies obviously fill the screen with many bullets and bombs, often leaving puffs and trails of smoke around the screen, and some of the many explosions are huge. Each of the Spitfire's immense bombs literally obscures half the screen, for example, and while all this flashy blowy-uppy-ness looks cool, it also means you don't see half of what's going on when things are hectic (which is very often). Perhaps as a result of the high difficulty, the stages are short - some only a few screens wide - but players of normal skill levels will still lose lives with alarming frequency. And that includes me! So as pleased as I was to find a sequel to P-47, it has actually ended up being a bit disappointing. It sounds nice and looks great - much more extravagant than its forebear, or indeed many other shmups of the time - and is a worthy update in most ways, but it's just too hard for me. I think I'll stick to the original for now.