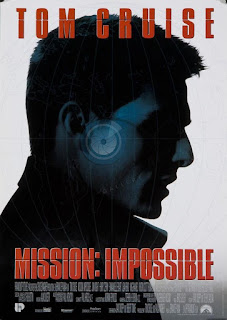 The subject of espionage is one that has been approached countless times in the world of film and television over the years, and one of the first such examples I remember hearing about, other than the adventures of a certain Martini-loving Brit of course, was Mission: Impossible. Though starting out as a popuar American TV series that ran from 1966 - 1973, the name is probably better known today for the film series that it spawned when the iconic name was dusted off some 25-odd years later, this time starring Tom Cruise as Ethan Hunt, the hero out to save the world. With the exception of the Cruise-haters, reaction to the films has generally been very positive.

Like most action-adventure films, the plots and scripts aren't always of the highest quality but the acting is usually decent enough, the casting great, and the action and suspense is top-notch for the most part, especially on the part of Cruise himself whose dedication to the action scenes is remarkable and sees him performing all manner of insane stunts (climbing a sheer rock-face without a safety net, scaling the outside of the Burj Khalifa, and most recently, hanging on to the outside of a plane as it takes off, to name but a few).

The fifth film in the series was released recently (which I watched in the Universal Studios cinema in LA - heee!) and it was met by a very positive reception, and that got me wondering... Was it the best one so far? If not, which was? I figured one way to find out was to revisit the previous instalments as well. So, having now seen them all again, here is what I thought of them: 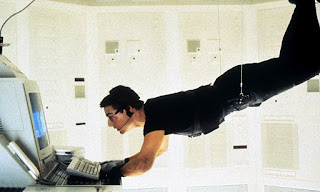 For some reason I never got round to watching this first entry in the rebooted series properly at the time and only recently watched it. We meet the new team, headed by old series regular, Jim Phelps (here played by John Voight), in Prague where they are to intercept the apparent sale of the IMF cover list, but the mission goes awry and much of the team ends up dead. Ethan Hunt then takes charge and, after learning of an apparent mole, recruits his own team which includes Luther Stickell (Ving Rhames) and Franz Krieger (Jean Reno). Their investigation takes them to London, by way of CIA Headquarters in Langley (which includes the iconic vault sequence), where they have been tracking the mole whom they must identify and stop before he sells the list. Understandably, the plot and the film generally isn't quite on the same scale as more recent efforts, and it has dated a little, especially the then-cutting-edge tech, but this first outing for Hunt still holds up pretty well. Brian de Palma's direction is decent enough, and the few twists and turns should keep you interested until the fairly predictable ending... 7/10 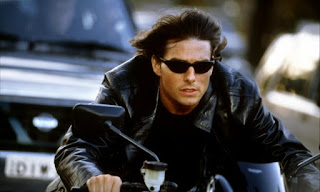 Arriving a few years later, and to a great deal more hype, this follow-up sees Agent Hunt assigned to take down a rogue ex-IMF agent, Sean Ambrose (Dougray Scott). To do this he must first earn the trust of Ambrose's ex-girlfriend, Nyah (Thandie Newton), and send her back to him undercover before he can unload a deadly virus sold to him by the CEO (Brendan Gleeson) of the company that developed it. All Nyah has to do is avoid suspicion long enough to find out to whom Ambrose plans to sell the virus, as well as the when and where. Ambrose won't be that easy to fool though - he went through the same training as Ethan, and he knows him well. It's not a particularly original premise but Nyah's undercover assignment provides much tension and the plentiful action scenes keep things ticking along nicely. The biggest problem with the film is John Woo's direction which soon starts to irritate - there's far too much slow motion, prosthetic masks are overused, and please, enough with the goddamn pigeons! It's not a bad action thriller and it's a reasonable follow-up but I think I would've preferred it if it was directed by someone else... 6/10 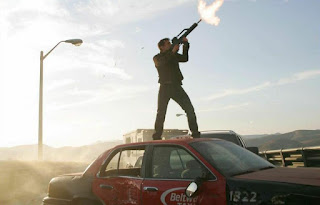 By the time this third instalment finally appeared it almost felt like a reboot, especially since, as we soon learn, Ethan has retired from field duty (and gotten engaged) and instead recruits and trains new agents. That is until his protégé (Keri Russell) gets captured while investigating arms dealer Owen Davian (Philip Seymour Hoffman). Ethan and his new team (Jonathan Rhys Meyers, Maggie Q, and Ving Rhames) attempt to intercept Davian in Vatican City where he's looking to obtain a mysterious object called the 'Rabbit's Foot'. Ethan's unsanctioned operation soon gets him in trouble with IMF's Director (Laurence Fishburne) but he's soon on the run and heading for Shanghai where, with help from Benji Dunn (Simon Pegg in his first appearance in the series), he tracks down Davian once again. Despite a somewhat vague plot though, this third outing is definitely an improvement for me. The cast is fantastic, including a memorable turn from Seymour-Hoffman, and the action is non-stop for the most part, with the highlight probably being either the infiltration of the Vatican or a crazy bridge missile attack. The best one so far... 8/10 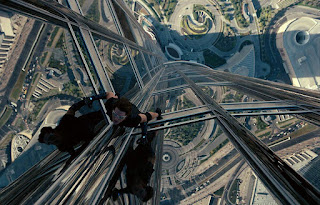 The first M:I film without a number in its title and also the best in the minds of many. It opens with the assassination of an IMF agent in Budapest who was investigating and individual code-named 'Cobalt'. Ethan is to take over the case but first his team need to break him out of a Moscow prison. Their next job is to infiltrate the Kremlin but Cobalt has seemingly beaten them to it, blowing up half of the site in the process. Ethan is the prime suspect and US and Russia are close to war causing the president to invoke 'Ghost Protocol', and that means they're on their own. Their pursuit of Cobalt (Michael Nyqvist) takes them to Dubai where he is trying to obtain nuclear launch codes, and then on to Mumbai where he's attempting to gain control of a Soviet military satellite to launch the missiles, intending to cause a nuclear war between the two superpowers. The stakes have never been higher for Ethan and his team then (now including Jeremy Renner), and the locations have never been more glamorous, resulting in some breathtaking sequences. Not only the best M:I film so far but also one of the best action/espionage films I've seen... 9/10 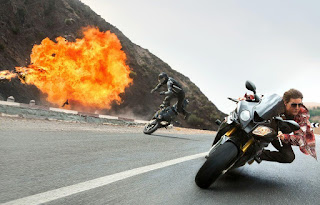 If things became difficult for the disavowed agents of IMF in Ghost Protocol, spare a thought for them here as the CIA's Director (Alec Baldwin) has the entire agency disbanded. Rather than return for debriefing though, Ethan continues his unsanctioned investigation into the 'Syndicate', an international criminal consortium that the CIA doesn't believe even exists. After teaming up with MI6 agent, Ilsa Faust (Rebecca Ferguson), and with the help of Benji, Luther, and Brandt (Renner), they head to Vienna to grab the man Hunt believes to be the Syndicate's leader (Sean Harris). The opera where they all converge ends up being more tragic than expected, however, so next our team heads to Morocco where a secure underwater server is believed to contain vital information on the group, and this in turn leads them to London and the highest echelons of power. Another extravagant instalment then, which happily keeps the quality level at a similarly high level as the previous entry. The performances and direction are superb and the many thrilling action sequences are fantastic. Probably not quite the best but not far off... 9/10

And that's it... for now! But until the already-confirmed sixth film arrives, the spiffing Rogue Nation is the newest instalment, so here's a trailer for it: