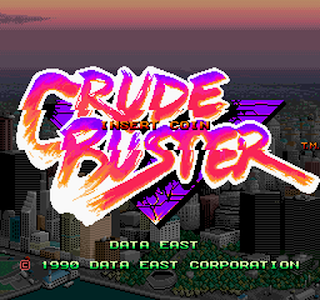 The 'Dudeism' movement which fell upon the Western world, primarily the US, in the late 80's and early 90's was a dark time in our history. Everyone and everything was deemed superior simply if it acted and sounded dude-like and this led to many tragedies. The gaming world was one of the hardest-hit, with countless otherwise-decent games being infected, and one example that has always remained foremost in my mind is Crude Buster, renamed Two Crude Dudes in the land of hotdogs and many firearms. It stars two mercenaries, who are indeed 'dudes' of the highest order, who have been hired by the U.S. government to stop a terrorist organization known as 'Big Valley' who are attempting to take control of New York City... after having detonated a nuclear device there. Apparently the threat of the devastating fallout that has surely now contaminated the area doesn't seem to deter them either. Luckily, one of the many benefits of being a 'dude' is apparently an immunity to ionising radiation. 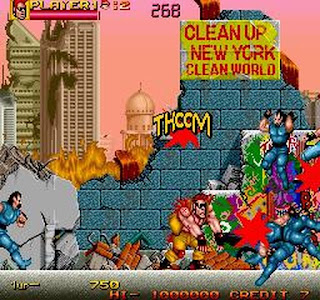 In fact, the city itself seems to be in pretty good shape considering what has befallen it, but anyway. Your job as one (or both, with a friend) of the muscle-bound oafs of the title is simply to beat the crap out of anything that moves until the enemy is vanquished. The small roster of moves is performed using three buttons - attack, jump, and grab. The first of these sends forth a flurry of punches and kicks while the second allows you to unleash flying kicks as well as clamber around the platforms and obstructions in each stage, but the last is a little more interesting in that it allows you to pick stuff up and throw it, such as boxes, steel drums, and even the enemies themselves! It's also possible to perform a roll and a quick rear-attack but the range of moves is still rather limited, and doesn't really cater for the enemies that have much longer reaches than Mr. Dude. Some of them can attack from halfway across the screen! 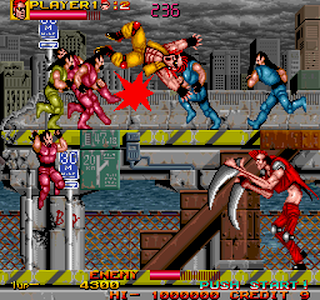 There are six stages in total which are mostly set in crumbling areas of NYC, and most of the time there are two tiers as well, much like Dragon Ninja or Shinobi, which you can jump up and down between at your leisure. Coming from both directions (and onto both tiers) are the many enemies who include default thugs in various coloured outfits, several types of martial-arts guys, wall-climbing buffoons, porky (and strong) wrestlers, and others armed with bombs, flame-throwers, and long grabby metallic arms. There are also middle and end-of-stage bosses but their toughness is a little inconsistent. For example, the first and second such guardians are a right pain in the arse (see Mr. Scythe Arms, above) and cost me numerous lives each, but the examples on the third and fourth stages can be bested with barely a drop of sweat spilled. That said, you still can't afford too many mistakes as their energy drops much slower than your own, so they take a while to put down, whether easy or hard. 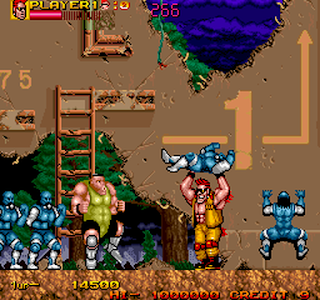 The stages can be pretty tough as well though. The number of idiotic enemies can get a bit much at times and I found the controls to be a little sluggish for my tastes, with iffy collision-detection too. There's not much finesse involved in playing either really. When lots of enemies are around, button-mashing works just as well as any attempts at a more measured approach, maybe even better, but I suppose this was never a game that was revered for its technical achievements - it's most famous for its bulky punk protagonists and their initially-appealing gorilla-press move rather than any gameplay innovations. They are distinctive-looking heroes, admittedly. They are of course wearing sunglasses throughout the game, just as any self-respecting dude would, and have several amusing animations and even a few spoken expressions, making them respectable main characters for a game like this, but it's a game I haven't really enjoyed playing through very much. 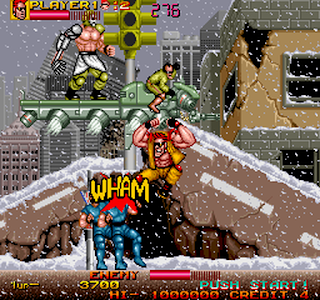 It's quite a decent looking game, with vivid colours used, some great sprites, and nice (though not that varied) backgrounds featuring the mostly-ruined NYC, but the audio isn't as good. The effects aren't bad but the music is forgettable and does little for the atmosphere which is somewhat lacking. I guess great music is just a luxury really though, and even if there was some, I still don't think I would've enjoyed the game much. The main problem is the two dudes of the title. Appealing they may have been (to some) at the time, but control of them isn't great and neither are their abilities. They're slow, with small jumps, a short reach, and their energy is sapped alarmingly quickly by the many hoodlums that quickly surround you, knocking you down over and over again (and you have to wait for the 'stun' animation each time). There aren't even any collectibles or power-ups. It all gets tiresome very quickly I'm afraid. It can be a bit of fun in short bursts with a friend, but like 'Dudeism' itself, I think Crude Buster was very much a product of its time, and one that now looks tired.