I mentioned in the last post in the series of features that season three of Voyager marked an upturn in the general quality of the episodes, but for some that time came a year later with this fourth season, and there was one big reason for that (or is that two big reasons?) - Seven of Nine. If reports are to be believed, ratings were flagging so the producers decided to add a new character to the show who could help pull in more viewers. But what approach did they take? That's right, they went for a young, gorgeous, blonde, female character with huge boobs, obviously! 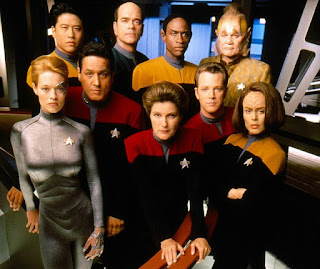 It's easy to knock them for aiming squarely at the 'horny young male' audience but it was a move that apparently paid off - season four saw an immediate and sharp rise in the ratings (but definitely no 'rises' of any other kinds - snigger). But Seven wasn't all pouty lips, skin-tight outfits, and curvy bits - she quickly proved to be an interesting character as well as a... ummm, rather aesthetically pleasing one. Jeri Ryan's portrayal is consistently superb in my opinion, too, and the character's origins (i.e. terrifying Borg drone disconnected from the collective and rediscovering her humanity in an innocent, child-like way) made for some truly great episodes and many, many memorable scenes. Some of them come this season which is definitely the best yet for the number of top episodes and I really had a tough time narrowing it down to the five featured.

Notable events in those that didn't make that cut include Kes leaving the show to make way for Seven (I think most viewers were very pleased with the exchange but that just made me feel bad for the little Ocampan pixie - I always found her so cute and helpful). In her final episode, she turns into a ghost and flings Voyager 'beyond Borg space', although that's actually debatable given how many more encounters there are with the mechanical oafs. 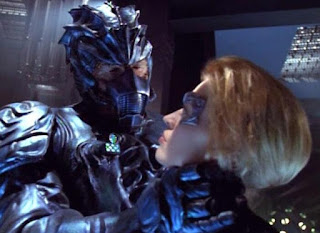 Elsewhere, Janeway deals with a bunch of ungrateful aliens while B'Elanna reveals her feelings to Tom, Chakotay gets stranded on a planet and ends up fighting in an alien war, the Doctor is excited to meet another hologram... until he turns out to be a psychopathic killer who despises 'organics', Seven finds her parents' old ship, B'Elanna is arrested for thinking about punching someone in an interesting look at the laws of a telepathic race, some crafty aliens steal a load of tech from Voyager (which they get back with the help of Leonardo da Vinci), Neelix dies (temporarily, in what is one of his best episodes along with Tuvix), the crew become trapped in a shared nightmare (which gives Chakotay's another opportunity to do spirit stuff), and a cowardly Hirogen fails miserably at helping his tough comrades hunt an elusive member of Species 8472.

Getting towards the end of the season, Seven has some DNA stolen, or so she believes, and she manages to convince everyone else too. There's also a mid-season two-parter in which the Hirogen make the crew unwitting pawns in a WWII-themed 'hunt'. Beyond that, Tom is excited when Voyager encounters another daredevil pilot with a fancy ship, an immensely dangerous molecule called 'Omega' has everyone excited/scared, Chakotay gets a visit from an ex-girlfriend who he doesn't remember, and Harry and Tom visit a dangerous 'demon class' planet.

There's also a decent Seven episode in which she freaks out after being left in sole charge of Voyager while everyone else has to go into stasis, and in another good one which almost made the selection below, a visiting alien decodes a message that leads to a way home for Voyager... but could it all be too good to be true? I'm sure you can guess the answer to that, but here are the episodes I did go for: 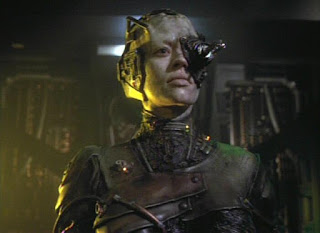 After the foreboding climax to this episode's first part, viewers were understandably clamouring for this follow-up and it didn't disappoint. With the insanely powerful Species 8472 on the rampage, Janeway, over the objections of Chakotay, strikes a shady deal with the Borg guaranteeing safe passage through their space in return for Voyager's help in developing an effective defence against Species 8472. Of course, they are quickly able to do this even though the Borg, with the knowledge of thousands of assimilated races, are stumped. Nonetheless, it sure makes for an exciting episode, and an important one too, as a certain female Borg drone makes her first appearance here (and I'm sure they would've left her sizeable boobs alone when they removed/replaced all other unnecessary body parts). She makes a immediate impression on the crew and viewers alike, but there are several great performances, especially from Kate Mulgrew's Janeway whose determination to get her crew home is stronger than ever. A major turning point for the show. 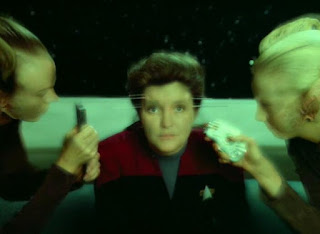 Far less important is this one but it is an episode I always remember anyway; mainly, I suspect, due to how freaky it is and unpleasant it would be for real. Voyager's crew, you see, are gradually falling ill with varying degrees of severity. Janeway is stressed and suffering from strong headaches, Chakotay has apparently aged rapidly, and Neelix has becomes spotty and smelly. The Doctor determines that someone or something is artificially stimulating their DNA, triggering the changes. While working with B'Elanna on the problem, he is suddenly deactivated while she suffers a seizure just as they were figuring it out. Now working more covertly from the holodeck, the Doctor is able to enlist Seven's help who, by using her Borg eye, is able to observe numerous otherwise-invisible aliens on board who are conducting and monitoring experiments on the crew. Eeeek! Definitely a spooky episode then, but with a satisfying ending which sees Janeway once again risking all to exact revenge (and the ship, as usual, survives the impossible). 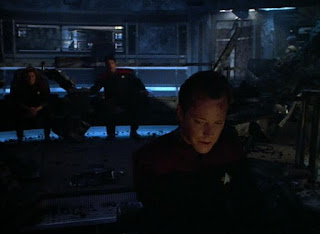 Here we have not only one of the best episodes of this season but one that's regularly included among the finest of all Trek episodes. It involves Voyager and its passage through a region of space formerly occupied by the Krenim Imperium who faded into obscurity long ago. However, when a mysterious ship wipes a local race from existence, it changes history and the Krenim are restored to their former glory. Sadly, they are not willing to let Voyager cross their space, and so begins a year long journey over which Voyager suffers repeated attacks by the more powerful Krenim oafs which take their toll on the ship, which suffers huge damage, and on her crew, many of whom are lost. Meanwhile, Chakotay and Tom have been captured by the Krenim ship as they were pootling around in a shuttle and, while Tom is being held as a prisoner, Chakotay seems to have joined forces with their fanatical (and amusingly-named) leader, Annorax (Kurtwood Smith). I'm not sure I'd name this as one of my very favourite Trek episodes ever but it's definitely a superb one - thrilling, moving, and full of near-constant drama. Poor Voyager :(

Message in a Bottle (Episode 14) 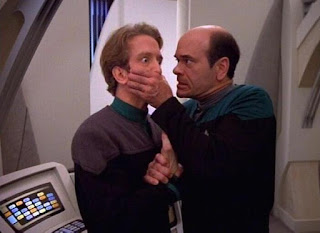 There are numerous 'contact with Alpha Quadrant' episodes and this is one of the first major ones. It occurs thanks to the discovery of an ancient alien relay network through which Seven discovers a Federation ship on the outermost edge of their territory. Unable to send a standard transmission to it, they instead decide to send the doctor (as holographic signals are apparently stronger) who finds an experimental warship called the USS Prometheus. Unfortunately, its minimal crew have all been killed by those pesky Romulans who are keen to learn its secrets. His only hope of returning to Voyager, or even surviving, is to join forces with the Prometheus's own EMH which is the newer, fancier Mark II, and find a way to get rid of those bowl-cutted monkey-spanks. The decision to portray the MkII as a nervous bumbling oaf, played accordingly by Andy Dick, is an odd one and basically makes this a comedy episode but it's also a mighty entertaining one. The Prometheus is an impressive ship too - nice to see the Federation have finally grown some balls. 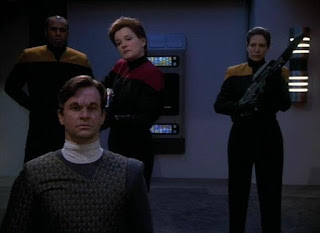 I had a tough time deciding on my final choice for this season's stand out episodes but settled on this one which is another one starring the Doctor who finds himself part of a museum exhibition 700 years in the future where the crew of the 'Warship Voyager' are shown as aggressive, cruel tyrants who will not only do absolutely anything to hasten their journey home but even seem to go out of their way to cause death and suffering to anyone they encounter, innocent or not. Upon being activated, the Doctor (it's actually a stolen back-up module) is naturally horrified to find the ship and her crew depicted in this way and sets out to convince the museum's curator of how horribly inaccurate their recreation is. It's a very unusual episode and quite unlike any other in the series, but the doctor is as entertaining as always and the rest of the crew are clearly having a lot of fun as their 'evil' alter-egos (though sadly there are no goatees here), particularly the sadistic Janeway (about to execute a prisoner, above) and Tuvok, who has adopted a sinister sense of humour. A nice break from the norm, this one.

Look out for my Season Five picks soon!