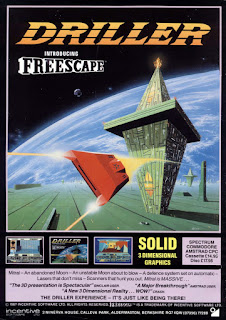 Released to universally dropped jaws in 1987 by Incentive Software, Driller was the first game to make use of the much-heralded 'Freescape' 3D game engine which was able to produce filled polygonal landscapes, even on the lesser-powered machines such as the Speccy and Amstrad CPC. According to Incentive it was "like being there" - a slight exaggeration perhaps, but it was definitely very impressive and led to a direct sequel as well as numerous other games, and I played and enjoyed most of them, mainly on my Speccy +3, but later on my Amiga as well.

Why is it memorable?
I've been into science fiction for most of my life so when I first saw Driller's advert it captured my attention immediately. It looked like it was straight out of one of the many 70's sci-fi books my dad had passed on to me, which all included some wonderfully imaginative illustrations on their covers and often inside as well. The artwork was fantastic - a futuristic green landscape dominated by a huge tower of some sort, a cool pointy red spacecraft zipping past it, a gorgeous planet looming behind - and it set the mood for the game superbly. Happily we weren't then let down either...

But is the game actually any good?
Yes! As a proper 3D adventure, it was a kind of game I'd never played before, but I was drawn into its atmospheric world straight away. The object was just as original as everything else about the game - you had to place drilling rigs on each sector of a moon to vent off gas, thereby preventing a catastrophic explosion, but it wasn't easy with all sorts of security systems trying to take you out. It has dated quite a bit now of course, but the impact it had in its day cannnot be understated, and in my view that was helped a lot by this superb advert.