My classification of some game genres has not always been shared by other gamers but I've always been keen on a one that's often known as 'Arcade Adventures'. I generally consider these to be kind of like watered-down action RPGs - faster paced with more arcadey gameplay but retaining some RPG-ish qualities like the collection of equipment, puzzley elements, back-tracking to access new areas, etc. They can be platform-based, overhead, isometric, or a combination of some or all of these, as long as they possess the aforementioned qualities.

And that brings me to the last NES Top Five I posted here (which was a somewhat startling 9 months ago now - has it really been that long?). After getting a little grief for leaving some games in particular out of my 'Top Five NES Platform Games' list, I decided it would be a good idea to make another list to which they would be better suited. Deciding which to include was nearly as tough as deciding which ones were even eligible (the distinction between genres gets mighty blurry sometimes), and I suspect it may also be derided to some degree, but here are my choices: 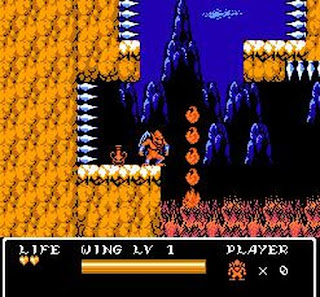 This game may actually be unique in that it's an NES-only sequel to a Game Boy-only original! That game cast you as Firebrand, the idiotic red demon thing from Ghosts 'n' Goblins, who was given the job of traversing a series of challenging platformy stages linked by an Zelda-style overworld with lots of towns and random battles. And this sequel is exactly the same! Well, more or less. It's actually a prequel, technically, with the story taking place during Firebrand's formative years, but the format of the game is very familiar. Which is a good thing I guess - the original was an enjoyable adventure after all, and so is this, but with the added bonus of colour graphics! They're quite pretty as well, and include a decent variety of landscapes as well as some nice ghoulish sprites, and the music isn't bad either. The stages feature perhaps more hazards than any other game I've played - it's often hard to find a spot that isn't covered with spikes or fire or something! Firebrand's floaty ability makes things much easier though, and it's a satisfying, enjoyable, and even reasonably fair game to play through. Not the most loved game here but it deserves your time. 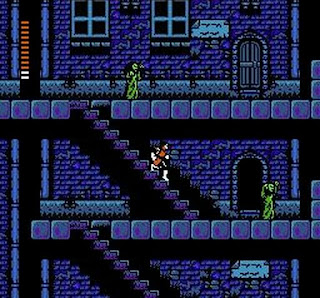 Though now more famous for their adventure-tinged platform action, the Castlevania series didn't start out that way. This instalment, the second on the NES, was the game to introduce that element to the standard platform fare and it was soon clear that it was the perfect compliment. Simon Belmont is again the star who's on a quest, believe it or not, to remove the curse put upon him by that pesky Dracula. He is free to travel anywhere in the extensive game-world via the world map, though many areas require certain items to access at first. As you spend time playing you'll amass experience points and there are also shops where new equipment can be purchased. There's a day/night cycle too, which unsurprisingly features tougher enemies during the latter! It's all standard stuff nowadays of course, but at the time it was a most welcome addition that added a lot to an already enjoyable series. The graphics are suitably spooky and the music will be familiar to fans of the series, even if only of more recent instalments. Some puzzles and clues on how to proceed were notoriously cryptic, admittedly, and in the days before internet walk-throughs it could leave you mighty frustrated, but it's still a highly enjoyable game as well as an important one. 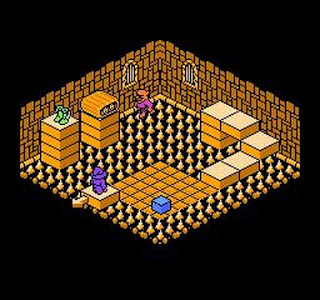 Unlike the other games on this list, Solstice is one that pretty much no one has ever called a straight platform game, but it does include many aspects found in them. Like platforms, for example, which are prevalent through many rooms of its flick-screen game-world. This consists of a scary (and large) fortress called Kastlerock, through which you play as Shadax, a nice wizard charged with ridding the world of Morbius the Malevolent (chortle). The game is viewed from an isometric perspective and incorporates several other game styles. There are lots of puzzles, for example, as well as some very mazey areas, which along with the various items to hunt down, makes this a very memorable adventure. The graphics use the usual few NES colours (orange, blue, etc) but everything is pleasingly neat and tidy and the audio is reasonable enough as well, and it's definitely a challenging game. Some of the obstacles can be a bit fiddly (though luckily control of Shadax is fine) and you'll probably get stuck fairly often, but it's a well-designed game and an extremely appealing adventure so it should keep most players hooked right until the end... (see full review here) 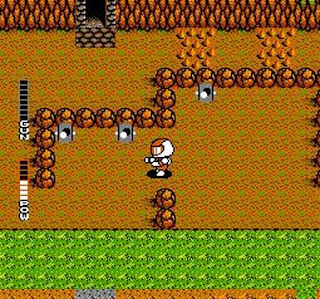 It was only a few years ago that I still had no idea about this game. I knew it existed, of course, but didn't know a single thing about it. I wasn't even sure it was a game based on its adverts in magazines of the day, but I have since delved deeply into its parts and found it to be wonderful. The story given to its Western release is stupid so we'll ignore that for the moment and focus instead on the game itself which sees some guy called Jason battling radioactive mutants across eight large stages. Much of this time is spent in his versatile wheeled-tank-vehicle thing with which he can explore most of the many platformy areas but he can also leave it and enter some areas on foot. Doing this often leads to separate mazey areas which are viewed from an angled-overhead perspective (as pictured). The mixture of styles works well and keeps things feeling fresh. The audio/visuals are superb too, particularly the fantastic music, and are just as varied, but the most impressive thing about Blaster Master is its size - there are tons of areas to explore and secrets to find which should keep you occupied a long while. Crap name perhaps, but a wonderful game... (see full review here) 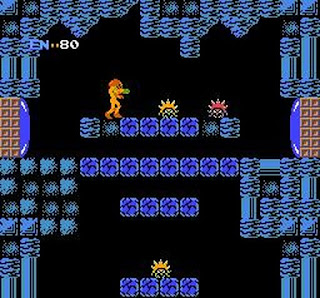 This was the game that saw the introduction of Nintendo's beloved Metroid series and it remains one of the NES's most celebrated titles with good reason. It had a pretty interesting plot involving the floopy creatures of the title and quickly proved to be more than the mere platform game many thought it was at first glance too. Playing as female bounty hunter Samus, your job is to rid the world of Space Pirates, infiltrate their base, and destroy Mother Brain, the terrible creature that controls them. The game is set on the planet of Zebes which is divided into several large areas, each of which consists of many caverns and rooms linked by doorways/elevators/etc. Large parts of the areas are not accessible to start with though, requiring you to explore the various paths, look for secrets and special items, and back-track once particular equipment has been found allowing you to progress. It was a pretty innovative approach in its day, and one that would go on to become a sub-genre of its own, and it worked superbly as well. That, combined with the atmospheric sci-fi setting, provided NES gamers with a fantastic and memorable game that was unequalled on the system.