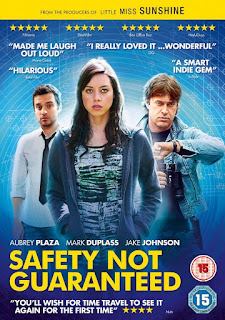 Tagline: "What would you go back for?"

There have been lots of films over the years that are based on pretty flimsy premises but there can't be too many that take their inspiration from a classified advertisement. But that is apparently from where the unlikely inspiration behind Safety Not Guaranteed originates - a real classified ad, written as a joke by a bored magazine employee, which read: "Wanted: Somebody to go back in time with me. This is not a joke. P.O. Box 91 Ocean View, WA 99393. You'll get paid after we get back. Must bring your own weapons. Safety not guaranteed. I have only done this once before." One could easily be forgiven for indeed thinking this a prank of some sort upon seeing it, but Jeff Schwensen (Johnson), a writer for Seattle Magazine, thinks it intriguing enough to be worth checking out for a potential story and, after convincing his boss (Rajskub) of the same, he's given the job.

After spontaneously selecting "the lesbian and the Indian", Darius (Plaza) and Arnau (Soni) who both work as interns at the magazine, he heads off to the seaside town of Ocean View to find and profile the person behind the ad who they quickly learn is Kenneth Calloway (Duplass), a local grocery store clerk. Jeff decides to approach him at home but his crass behaviour quickly alienates him, so he instead sends Darius to make contact, and she meets with more success. Jeff instead decides to spend his time in Ocean View looking up an old flame who (hopefully) still lives in the area, but while he's catching up with her (Bergere) and generally goofing off, leaving all the work for his interns (while taking the credit himself, of course), events take an unexpected turn when Darius and Jeff quickly develop an unlikely bond. Unsurprisingly it's these two we spend the most time with as Kenneth gradually opens up to his new partner.

Darius is a recent college graduate struggling to find work, largely due to her cynical, snarky attitude, and has become disillusioned with life, but she quickly seems to take a genuine interest in Kenneth who, to many, would seem strange or even delusional. His is literally trying to go back in time after all, and he has become paranoid that he's being watched by government agents too. It's oddly compelling to watch this strange new friendship develop and it's helped by superb performances from both Plaza and Duplass who are well suited to their roles, and it's this which is central to the film's success. Their characters are endearing and you're never quite sure which turn events will take them next, and that's always welcome, especially in a original, dare I say quirky film like this. The cast and budget may be small but the heartfelt story and great script make for one of the most charming indies I've seen in a while.