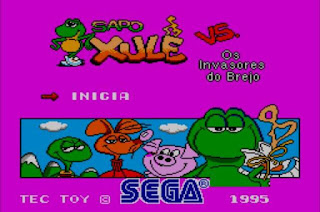 As many of you no doubt already know, Sega's wonderful Master System was very popular in Brazil and lasted much longer there than in any other territory. It was still receiving new releases well into the middle of the 90's and some of them were localised as well. One of these was Psycho Fox, among my very favourite of all games on the system, which was reworked into this, the first of three MS games to be based on Sapo Xulé, a frog character from a series of Brazilian comic-books (the name translates as 'Smelly Feet Frog: Invaders of the Swamp' in case you're interested). Apparently he's popular too (and you would think so if he features in three games) but my wife has never even heard of him, and she's from Brazil! Oh well, popular or not, the point of this post was to see how different the game is to my beloved Psycho Fox, and after spending an afternoon playing it I can confirm the answer is... not very! 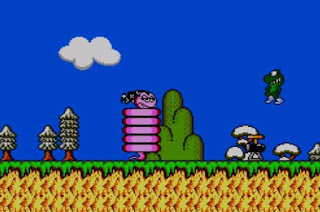 As well as featuring a frog in place of the fox, this game also features a pig, mouse, and turtle in place of the hippo, monkey, and tiger - not the most obvious creatures for their given strengths (power, jump height, and speed respectively) but I suppose they probably didn't have much choice from the source material, and despite their new appearances they control exactly the same. Some other differences include the power-ups (it's now a fly that bestows temporary invincibility, a potion that allows you to change animal, and a sock (?!) takes the place of the wibbly effigy smart-bomb thingy), and the bosses have been slightly altered. Like the player characters, they're still essentially the same, they just look a little different (like the creature above), presumably now resembling villains from the Sapo Xulé comic instead. 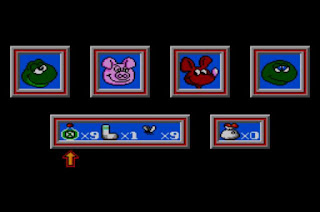 By far the worst change though, is the removal of Birdfly who, as you'll know if you checked out my post a while back, is the greatest character in the game. Here he's been replaced by... a shoe. This is particularly hard to accept, such is my appreciation of Birdfly, but the fact is, aside from these cosmetic changes, Sapo Xulé's début MS appearance is exactly the same as Psycho Fox - the stages, music, standard enemies, controls, and everything else not already mentioned - and that means it remains one of the best games on the system. It does also makes me question whether it was even worth changing anything about the game though. Obviously it was done to try and shift more copies, but if the frog has as little appeal in Brazil as it seems, it was a bit pointless. Besides, any game featuring a monkey is diminished by the removal of said monkey. Great game then, but unnecessary changes...

Gameplay Video: Watch a not-particularly-talented player bumble around for a while here!