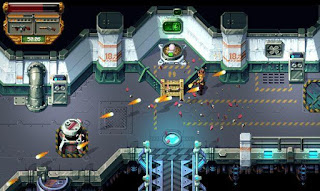 It's been a while since I looked at an overhead run 'n' gun game but one that recently came to my attention is this forthcoming indie release. It's a Kickstarter-funded title, set in a world where many of our citizens are holed up in self-sustaining Towers. One of these - Tower 57 - is allegedly planning an invasion so it's your job to find out what's going on and put a stop to it. The game isn't finished yet but it's not far off and will include six varied characters to choose from, each with their own special abilities, for you and possibly a friend to blast through the Tower with in single or two-player co-op modes. The Tower, being a tower and all, consists of multiple floors too, each with its own theme, so there's plenty of stuff to shoot up. 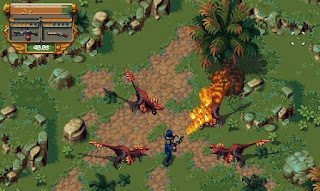 I've only played a test version of the game so far but it looks to be shaping up very nicely. The lovely pixelly graphics have been crafted in the finest traditions of our favourite 16-bit systems (it most resembles a late Amiga game to me) and there are tons of weapons to shoot the varied enemies with including spread-shots, rockets, a lightning cannon, and (somewhat amusingly) a black-hole generator too! The controls are great as well, offering either a twin-stick option via a 360 pad or cursor keys/mouse instead, and it looks like some nicely varied (not to mention destructible) stages will be on offer to run around. I think it's too late to back the Kickstarter now but this is still definitely another one to keep an eye on.

To find out more about this superb run 'n' gunner, check out its Steam Greenlight page here :)