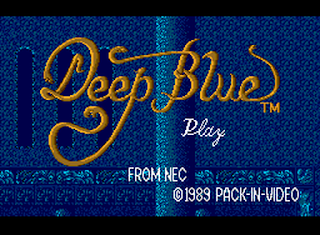 When I think of underwater shmup action my mind usually tends to picture the splendid third stage of Thunder Force III but I can't think of too many that take place within the big blue wobbly stuff entirely. One that apparently does, though, is this much-derided PC Engine exclusive. Despite this setting, there are still aliens involved in the back-story who have reportedly infected our wonderful oceans with evil bacteria which has made the creatures that dwell therein grow larger and follow the commands of their new masters. Earth's only defence against the attack is the A.N.G.E.L. Fish Attack Sub which is, as you might've guessed, a submarine... with the appearance of a fish! Thankfully its abilities exceed those of most marine lifeforms and by using these you, as the sub's anonymous pilot, must eliminate a substantial portion of said lifeforms. Poor fishies :( 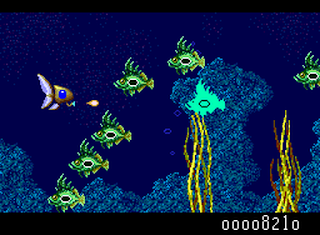 There are a mere four stages here to swim/shoot through so your mission should be a brief one, but it's still not easy. Your sub starts with a feeble pea-shooter (known as 'Pulse Bullet') and there are two other weapons ('Bullet Beam' and 'Swirl Cutter') available in the form of coloured capsules left behind by certain fish upon destruction. All three weapons fire directly forward and differ only in their power and rate of fire. Collecting consecutive icons will power-up them up and there is also a speed-up available which is very useful but all-too-rare. Only having narrow forward-shooting weapons doesn't make things easy as you can probably imagine, but unfortunately it's not the only thing that makes Deep Blue ultra-tough. You only get one life for starters, with your sub instead employing an energy-meter type deal. This isn't terrible in principal but in practise? Urrghh! 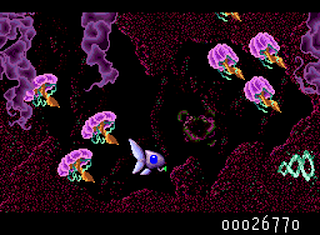 The biggest problem is probably all the heinous enemy creatures. I guess the developer was going for realism and in that regard they were successful. The many aquatic terrors don't travel in straight lines or swoop around in formations as in most shmups. No, here they appear from all sides of the screen, sometimes in groups, other times not, but their movements are often unpredictable as they flit around all over the place. Worse than this are the swarms of tiny creatures which attack en masse. Some of them don't even have the decency of flying across the screen and beyond - instead they hang around your ship sapping it of energy. Making this even worse is the fact that when you take damage it shudders and sparkles for a second, during which time you're unable to fire your already-painfully inadequate weapons making it even harder to get rid of the damn things! 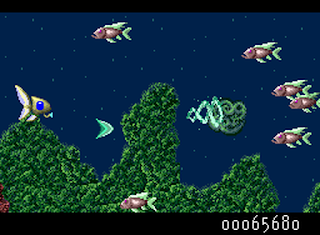 This generally means you are likely to suffer more than just one hit each time you encounter these idiotic creatures. Worse still (nope, not finished yet!), the speed-up is lost after taking a single hit and without it your sub moves slowly and sluggishly. It's also pretty big which means you're not likely to be weaving around the enemies much, especially with their wibbly, erratic movement. Most don't actually fire anything - they themselves cause the damage, and that's more than sufficient to cause you problems. Each hit, as well as stripping you of the speed-up, will also reduce your weapon power by one of the three possible levels, and you're really not going to get very far with a low-powered weapon. Well, with all these things against you, you're probably not going to get very far anyway. Although most players probably won't even have the patience to try. 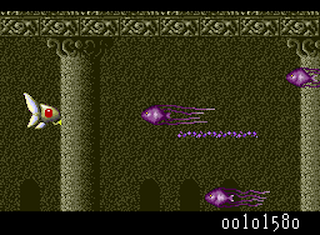 Some shmups may have a fault or two that it's possible to overlook if the core of the game is solid, but there is just too much wrong with Deep Blue. Even the audio/visuals are quite poor, consisting of bland, repetitive backgrounds and mostly irritating music (although the fish sprites are pretty good). There are even borders at the top and bottom of the screen (which I've partly cut out for the shots). The premise here is okay - it would sound like an interesting and fairly original take on the genre if you were to explain it to someone - but the sluggish sub movement, poor weapons, and harsh energy/power-up system make Deep Blue an infuriatingly hard game to play. Add in the realistic fish movements and you've got a game that's so annoying you won't be able to stand more than a few minutes of it at a time. Not a bad idea but it just doesn't work.