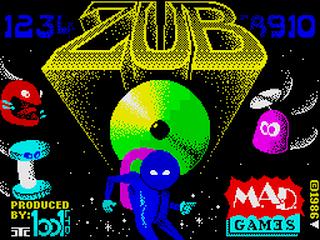 If I recall correctly, one of the first budget games I ever bought (or was given, as was more likely the case in those days) was Zub. It was an immediately eye-catching game, mainly due to its splendid comic-book style cover, but it was memorable for a few other reasons as well. It puts you in the shoes of Private Zub who is summoned by Sergeant Zub and briefed on a mission he is to undertake on the orders of King... umm, Zub. The task at hand is to recover one of the king's crown jewels, the Green Eyeball of Zub, and return it. This dazzling jewel won't be easy to grab though - your quest begins on the planet Zub One while your quarry is all the way over on Zub Ten. Getting there isn't as straightforward as you might think either, as the planets don't simply lead from one to the next. 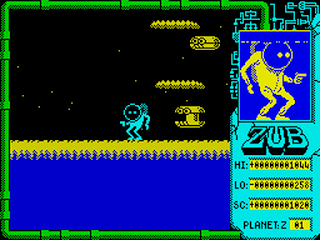 The action is viewed from the side with each stage (planet) being just over three screens wide. You start at ground level and must make your way to the top of each where there are three teleporters on the left, middle, and right. Which one of these you enter will determine which stage you go to next, and it's not always a later stage. The passage to the top of each stage is by way of many small platforms which are barely wider than Zub himself. There is only one at each height but they can be moved left and right until you find the next one. Just keep jumping up and up until you reach the top. Of course, it's not quite that simple though - each stage is also home to a different type of 'security robot', with their numbers depending on which of the five difficulty levels you select. 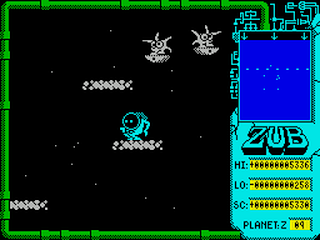 On the default medium difficulty, there are three robots which buzz around you, draining your energy on contact as well as shunting Zub backwards a little. If you're on a platform, this invariably means you'll be knocked from it and fall all the way down. If you're lucky you might land on a lower, previously-used platform but mostly you will have to start again from ground level. Something else which drains your energy, even faster than the robots in fact, are the force-field barriers which mark the boundary of the stage on the left and right on the play-field, and you only get the one life so Zub's mission is far from easy, especially since his energy is not replenished between stages. However, between later stages you'll get to choose a power pill using a rolling selector. Although there are five of these, it seems all of them refill your energy. Seems a bit pointless but it's a great help! 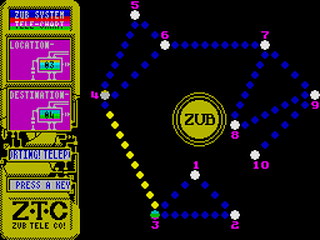 Zub is able to fend off the infernal security robots by using his plasma bolt gun. You can't destroy them though - an accurate shot merely sends them pootling back up to the top of the stage before coming back down to hassle you once again. This naturally means that the higher you climb, the less time you'll have each time you shoot one. In addition to end-of-stage bonuses for shooting accuracy, points are earned as you climb, but you lose them when you fall back down, and at a greater rate too, so you can actually end up with a negative score! The obvious solution to that problem is simply to not fall off (or get knocked off) the platforms, but it's much easier said than done. It's therefore a good idea to learn the fastest route possible through the teleporter system. 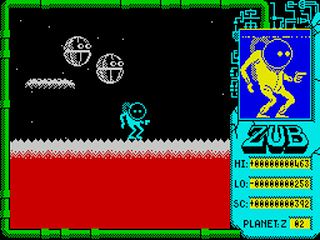 The stages don't vary in layout or style much but each one features a different enemy, colour scheme, and small landscape details, and it isn't a bad looking game - a little basic but appealing, especially Zub himself who is an endearing fellow. The audio is limited to a couple of effects but the 128k version of the game has some great music. Either way though, Zub was and remains a mighty entertaining game. Yes, it can be a tad frustrating to get knocked from a high platform and fall all the way down again, especially if it keeps happening on the same stage, but there is a scanner to show you where the enemies are to help you avoid this and it's addictive enough to keep you trying anyway. The controls are occasionally irritating but overall Zub is pretty much everything you could ask for from a budget game.

Gameplay Video: here's a video of the whole game being played by one of the talented fellows at RZX Archive (check out their great channel here). Oh, and don't watch if you want to avoid spoilers!