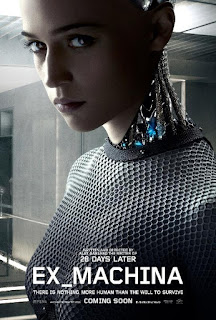 Tagline: "There is nothing more human than the will to survive."

As far as many imaginative people are concerned, the great doom of our time will come not from a cataclysmic asteroid impact, nuclear war, or alien invasion, but as a result of artificial intelligence. It's unquestionably something with many potential implications - problems that we will no doubt be faced with in the coming years - and there have been many films that have tried to tackle some of them. The latest is this British effort which is the directorial début of Alex Garland, previously best known as a screenwriter, notably for some of Danny Boyle's films such as 28 Days Later and Sunshine. For his first film, Garland based the story on an idea he's had since he was a child, the essence of which was simple - could a machine ever be truly sentient? The answer seems clear but is it really that straightforward?

It's a film apparently set in a world without the mighty Google, for the most popular search engine in this world is known as Bluebook. One of the company's programmers is Caleb Smith (Gleeson) who wins a workplace lottery-style contest to spend a week with his reclusive-genius boss, Nathan (Isaac). After the first mystery of actually finding his house is solved, the reason for Caleb's visit is soon revealed. Nathan has designed a humanoid robot named Ava (Vikander) whose personality is made up of a revolutionary artificial intelligence based on the personal information and search queries of billions of Bluebook users. The result is seemingly a sentient, almost-human female. Caleb is there to administer the Turing test to Ava, which is designed to measure an AI's ability to persuade the tester it is human.

The test is performed over a series of 'sessions' or meetings with Ava in a room adjacent to her room (in which she is sealed), separated by a transparent wall, and Caleb is initially as unsure what to expect as we viewers are. Upon meeting her, it's clear she's a robot - aside from a realistic face (and hands), she's mostly composed of metallic mesh and plastic, transparent in places revealing the various glowy electrical stuff that makes up her innards. With it therefore already plainly obvious that she's not human, how could she possibly pass Caleb's test? Her ability to do so is certainly assisted by a superb performance from Swedish star, Alicia Vikander, who has an unusual job on her hands - not to act like a human, nor like a emotionless automaton, but like an intelligent, self-aware robot.

She pulls it off wonderfully though, giving Ava just the right amount of innocence whilst also injecting just a little creepiness, and you'll soon start thinking of her as a person rather than a machine. Perhaps less important are the two male characters but Gleeson and Isaac also do a great job as the smart-but-naive Caleb and the enigmatic Nathan respectively, while Mizuno doesn't even have any dialogue but still makes her presence felt. Together, this small cast and first-time director, saddled with an equally small budget, give us one of the most gripping and thought-provoking films of the year so far, building things up perfectly before hitting us with a superb ending. You could say it's as much a warning as it is a piece of entertainment but it's damn good slice of original science fiction either way.