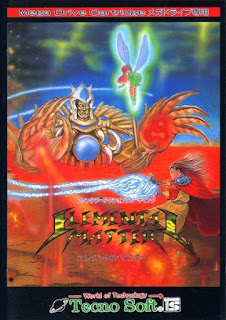 Much like the recent Raiden Fighters post, this is another one I'm a tad late with (not that it takes me ages to get around to everything of course), and was in fact the very next game I played as part of the Shmup League. Unlike that previous toughie, however, I had actually played this one before (I've even reviewed it - check here!) so I had hopes of putting in a better performance. Sadly this was only marginally realised (I finished 9th out of 12 - chortle) but it did also give me the opportunity to play it properly again for the first time in a rather startling five years.

The first thing I noticed when playing it this time is that it's harder than I remember. I guess that's often the case though, when you're long out of practise, but I found that Laden (the character you play as) seemed larger and slightly clumsier to control that he used to, and unsurprisingly I didn't get particularly far! To start with at least, but practise pays dividends as they say, and I gradually gained a degree or respectability (without ever threatening the upper half of the league of course, which consisted pretty much exclusively of 1CC scores). I soon polished off the first four stages, any of which can be selected from the start of the game, but it here that I again ran into problems.

If I recall correctly, I didn't get a great deal further than this the first time around owing to my somewhat substandard gaming skills (which appear to be deteriorating over time - I must be getting old), but the main thing I've been reminded of while playing this game again is its fantastic aesthetics. I knew it was a great looking and sounding game - most Techno Soft games I've played so far are - but I'd apparently forgotten just how pleasing it is on the eyes and ears. 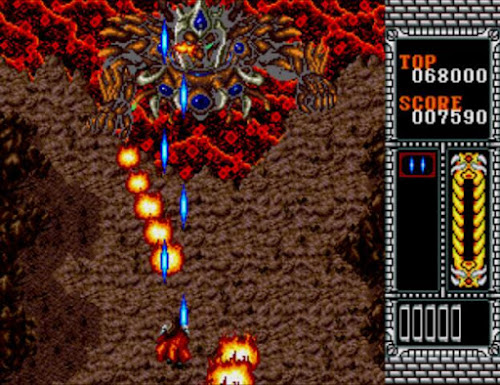 Happily for untalented oafs like me, it's actually the easier first four stages which are the prettiest in my opinion, along with probably the one that follows them which I don't often get past thanks to the idiotic demon thing guarding its exit who takes an age to put down. His stage appears to consist of a fancy Palace of Evilness and the grounds leading up to it, but the preceding stages are all based on 'the elements' (as so much video game stuff seemingly is) and are even better if you ask me.

The first features a rocky landscape which leads to fiery cracks in the floor before reaching full-on lakes of lava (and includes the unformidable boss pictured above) while the second winds through chasms with boulders being dropped on your head, with later sections including moving rock-faces! The third is a pleasant wooded area where you can hide underneath trees (but don't get ambushed there!) whilst being careful to avoid many thrusty things, and the fourth features lots of watery areas, but before long you're reached the harsh icy plains that precede the aforementioned enemy stronghold, wherein awaits the pesky demon that pains me so. 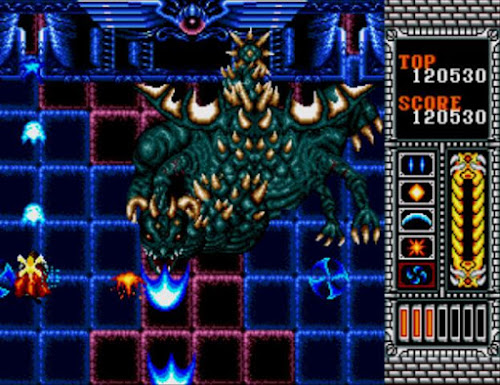 I suppose in retrospect, the screenshots I have selected here don't really showcase the splendour of the graphics as well as others might have done, but suffice to say, Elemental Master really is a gorgeous game. Technically it's perhaps not quite the MD's finest, but everything is designed superbly and it sounds fantastic too, thanks to the distinctive synthrock soundtrack by Toshiharu Yamanishi (also responsible for Thunder Force's III & IV amongst others).

As most self-respecting MegaDrive gamers already know, it's not just about these lush audio/visuals either. It's probably a game that takes a bit of getting used to, even if you've played it a lot in the past apparently, but it's pretty unique for shoot 'em up standards too, what with our hero charging through each stage on foot. As far as I'm concerned, that makes it an essential part of any MD collection and it's been great rediscovering it after all this time. I guess I'd better not leave it so long next time either, or I'll be stumbling around the first few stages again!