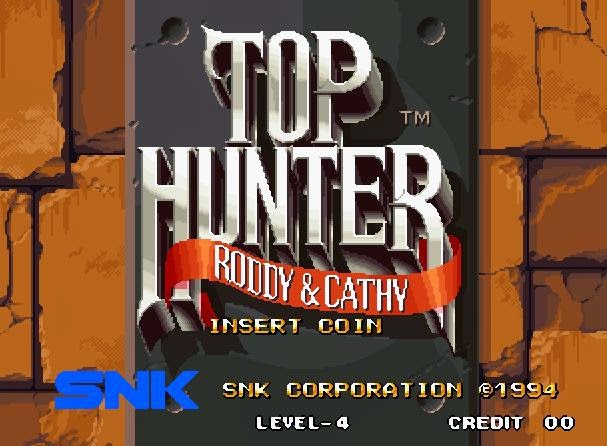 The names 'Roddy' and 'Cathy' may not conjure very heroic images in one's mind - they sound more like the hosts of a kiddies TV show to me - but they are the names of the two heroes found in this here leapy slap-fest which SNK graced us with mid-way through the Neo Geo's life. It's not an easy game to categorise either - it takes the form of a platformy run 'n' gunner, but with much fightyness instead of guns. Well, kind of. Anyway, our 'heroes' (chortle) are apparently bounty hunters who are sent "to put a stop to a colony of Galactic Pirates called the Klaptons who threaten and plunder the cosmos". These cretinous pirates have seized four elemental planets and it's your job as Roddy (player one), and possibly Cathy (player two) as well, to reach and defeat each planet's newly-installed leader, all of whom are of course working for the heinous main man, Captain Klapton. 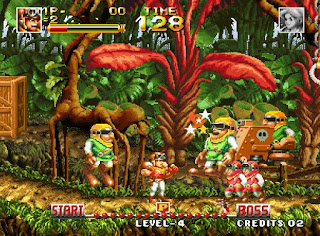 You can tackle the four planets in any order you like and each is split into two parts. Both parts feature a boss at the end who you've got a limited amount of time to reach. The first is an M. Bison-type guy who leaps about the place until you've smacked him up sufficiently while the second is the main boss of that planet who is generally one of Captain Klapton's main cronies in some sort of weird contraption. The planets, which are based on the 'elements' of Forest, Ice, Wind, and Fire, are slightly unusual in that you can jump back and forth between the fore-ground and background of each throughout most of their length. Appearing on both planes are a seemingly-endless supply of basic henchmen, as well as slightly more formidable enemies. You don't actually have to tackle any of them, they're just there to hinder your progress, but if you choose to you'll find a good number of attacks. 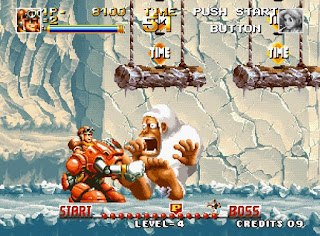 The two characters have their own unique sets of moves which include punches, throws, various combos, and some KOF-style special moves too. These are usually super-duper flashy punches and kicks and stuff but even include projectile attacks as well, which can come in very handy, particularly when fighting bosses who often unleash similar moves themselves. Oddly, Roddy seems to possess extendible arms too, while Cathy has a chain, both of which allow you to grab enemies from half-way across the screen! Button-mashing techniques are just as effective against the hordes of idiotic normal enemies though, who come from either side of the screen, pop out of undergrowth, from behind objects, or anywhere else you might think of too. Hurling them into the dirt will leave a coin in place of their mangled corpse as well, and there are plenty of other bonuses around. 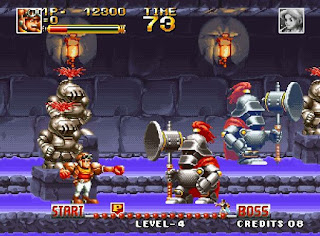 These are most often by way of very-obvious hangy-downy chains that you can pull on (much like old-fashioned toilet flushers) which see collectibles rain down upon the landscape including giant coins, gems, or lush foodstuffs for bonus points, extra time, and a splendid power-up that turns your chosen character into a golden idol who dishes out double-damage attacks (temporarily). Some parts of the scenery, usually barriers placed in your path, can be destroyed too, and you can pick up other stuff (such as crates) and throw them at enemies. There are even a few bits of hardware you can get your mits on. Some enemies drop guns that can be used for a short while, for example, and others can be found operating what looks like anti-aircraft guns which you can knock them out of, but the best help comes in the form of the mechanical 'Walker' devices. 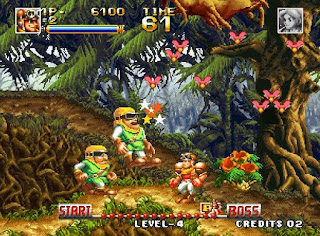 As the name suggests, the Walkers are basically a mechanical set of arms and legs that lets you stomp around and punch all the idiotic enemies (see screenshot on icy stage above). They conk out after you get knocked off them a few times but they're enormous fun while they last, and that sums the game up as a whole as well really. Near enough everything about the game is very overtly comedic, from the loud, lively music and effects to the cartoony sprites which, whether large or small, are superbly animated. There's a great amount of variety too. The stage/background themes aren't especially original but they do make each one very distinctive and they're packed with detail for the most part. The Forest and Wind stages in particular are gorgeous! The foreground and background planes often split into more widely separated paths as well, before later rejoining. 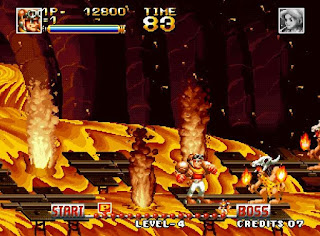 The sprites are also nicely varied. Most common, appearing on every stage, are the various versions of rotund buffoons which comprise the stock enemy and they're soon joined by hammer-wielding knights, giant yeti-type creatures, spikey snakes, cyber-punks, and several other seldom-seen foes. They're all superb and most are amusingly animated too, including some great facial expressions when you whack them! The difficulty curve is pretty decent too. It's not one of those overly hectic games where it's impossible to avoid some attacks - it can actually be 1CC'd (not by me, of course!), but whether you die often or not, there's always stuff to see and do (there's even a secret skateboard bonus game) and plenty to keep you coming back. Not least of these is the superb two-player mode, but players should be wary of making the game more boring by sticking to a 'plane' each! 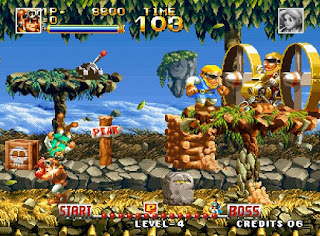 To be honest, though, whilst most likely intended for two players, Top Hunter is a great laugh in solo play as well. It doesn't seem to be among the Neo Geo's most popular games for some reason - I'd hardly even heard it mentioned before looking into it for this review - and that's slightly odd if you ask me. It looks and sounds fantastic, its three-button controls are fine, it's equally enjoyable for one or two players, and is rarely anything but enormous fun, so why is it not among the most revered games for SNK's system? Well, for all its vibrant visuals and general comedic tomfoolery, it does seem to lack that spark that can turn a good game into a really great game, but there's not actually anything wrong with it either, and it still deserves more recognition than it has apparently received, so I urge you to give it a try if you haven't done so before.