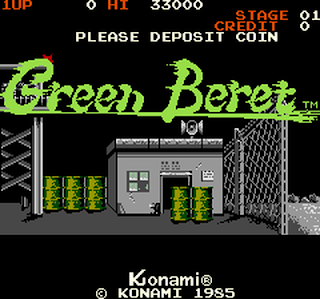 Although very popular at the time, and converted to every format under the sun, I'd still only played Green Beret on my trusty Speccy prior to this review. I didn't really like it too much back then either, even though I had it on disk for my mighty +3 which meant I could have it up and running within 30 seconds or so. Despite this, for no readily apparent reason it popped into my head spontaneously the other day, so I figured I'd give it the once over here as part of my run 'n' gun feature. This may make some people's eyes widen in shock but I would say it still counts as a run 'n' gunner - you do run around platforms taking out never-ending enemies after all. There isn't much in the way gunning though, I must admit, with the nameless stock military dude under your control here (we'll call him Gavin for review purposes) apparently preferring bladed weapons. So, it's a run 'n' stabber then? That's good enough for me! 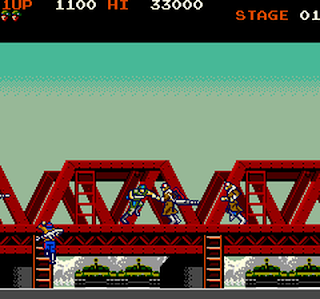 Being a military dude, Gavin has a mission. He has been charged by unknown person(s) with infiltrating an 'enemy' base and rescuing four captives. This unsurprisingly means the game consists of four scrolling stages - Mashalling Area, Harbour, Air Base, and Siberian Camp. Each of them is at least two-tiered and features an endless procession of enemies, many of whom look like Soviet soldiers (coincidental I'm sure). The majority of them attack on foot and are unarmed, simply running towards you and causing death by mere touch (perhaps they have radioactive clothes or skin), but some are equipped with guns, mortars, rocket launchers, etc. There's one type that performs a flying kick whenever you get in range too, and even an occasional hang glider attack! The 'boss' of the first stage consists of a concentrated burst of these standard enemies on a static screen, but later stages get a little more creative. 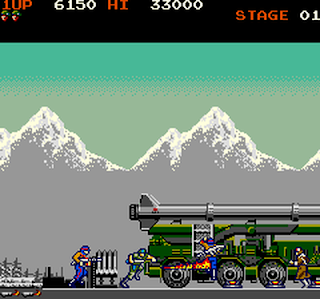 Of course, leaving Gavin to face all this with just a knife wouldn't be very sporting. Luckily he gets a little help in the form of weapons which a certain type of enemy (in black uniforms) drops. These include a flamethrower, rocket launcher, and hand grenades, all of which are good for a few shots. Control of Gavin is excellent which also helps. He can jump enemies, duck their attacks, and climb ladders with ease, and everything is responsive. This is actually one of those games which looks rather easy if you're watching someone else play it (someone who's good at it, anyway) but it is definitely tricky to get all the way through on one credit. The number of enemies can get a bit overwhelming at times. They attack from both sides and move up/down to whichever tier you're on at the time, and there are land mines to contend with now and then as well as the projectile weapons. It's also a very addictive game though. 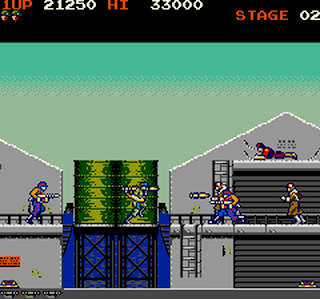 In fact, it's one of those where you will be convinced you can get further the next time, and you may well do so. Not that you'll get a grand reward if you do manage to finish the four stages as it just loops back to the start, but for its day this must've been a pretty impressive title. Okay, the audio isn't great. Though the effects are decent, the 'music' is just a repeating drumroll type track, but the graphics are quite nice. There is a reasonable amount of variety in the sprites and backgrounds and some good detail too. I really can't remember what issue I had with this game back in my Speccy days but I've certainly enjoyed playing it for this review. It has some minor faults but for the most part Konami didn't put a foot wrong. It's enjoyable and addictive and you don't very often get that feeling that it's being unfair either. If you get the chance to give this one a go, either again or for the first time, don't hesitate.