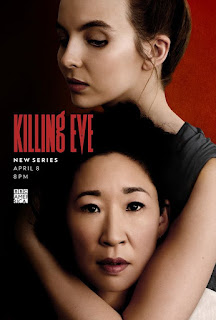 The show in question is, perhaps unsurprisingly, Killing Eve in which she plays the title character, Eve Polastri, who despite being firmly in possession of a North American accent, was apparently raised in the UK. She now works for MI5 as an investigator - a job she finds unfulfilling. When the sole survivor of an assassination is killed on her watch, however, she and her boss Bill (Haig) finds themselves out of a job, only to almost immediately get hired by Carolyn Martens (Shaw), head of the Russia Section at MI6, who Eve had previously impressed in a meeting.

The job given to Eve and her team (which includes Bill at her urging) is to track down the emerging-yet-already-enigmatic assassin who works under the codename of Villanelle, who also happens to be the assassin responsible for the hit that cost Eve her job to begin with! Interestingly, however, the efforts of Eve's team in piecing things together and identifying the killer only occupy about half of the runtime, with the rest devoted to Villanelle (Comer) herself. She is based in Paris where she receives her assigned targets through her handler, Konstantin (Bodnia), who tolerates her eccentricities because of her skill and efficiency as a killer, but Eve and her team back in London (her assistant Elena (Howell-Baptiste), hacker Kenny (Delaney), and Bill) have already become familiar with Villanelle's MO.

There isn't really too much of a story here though, to be honest. There is some talk of 'The Twelve', a shady underground group of criminal string-pullers for whom Konstantin (and therefore Villanelle) probably work, and there may be a pattern to the hits, but the show's emphasis is mainly the relationship between Eve and her sociopathic opposite number who quickly develop an interest in each other.

This happens much quicker than it does in the Luke Jennings books on which this show is based. That is of course understandable - there are only eight episodes here after all - and fans of the books may not be too surprised to hear of a few other changes too, notably with Villanelle herself. In book form she is intelligent, disciplined, and committed. She is all those things in the show as well, but she is also much goofier here, appearing to take little seriously. That said, when she receives a new target, she doesn't let anything stand in her way, and actually seems to enjoy toying with them as well as snuffing them out. Of course, there is ample opportunity to flesh the characters out in printed form, but even in this condensed form, Jodie Comer quickly establishes Villanelle as one of the most interesting and compelling new characters to grace our TV screens in a long while.

She is young and beautiful, but lacks many social graces and acts more like a child much of the time. She spends her free time entertaining herself on seemingly trivial pursuits, picking up both men and women, and buying expensive and overly elaborate clothes and perfumes. In fact, it's often easy to forget she's a ruthless murdering psychopath, and that's a testament to Phoebe Waller-Bridge's excellent screenplay, but also Comer's exceptional performance.

She certainly isn't a newcomer by any means, having already been noted for roles in Doctor Foster and The White Princess as well as many smaller parts on various TV shows, but I suspect she will still be unknown to many, as she was to me. Whether she's familiar or not, though, she is a revelation in this role. She does some superb accent work - her character is Russian but she uses a few other accents too, none of which are her own (she's from the north of the UK) - but the secret to her popularity, and her compelling performance generally, is her face. She can look like an innocent child one minute and a deranged killer the next, by way of all manner of facial expressions, all of which say more than any lines of dialogue could. She can be funny and scary in equal measure, and is completely unpredictable in any case. The only problem really, is her making such a psycho likeable!

As entertaining as she and her many faces are, though, this is meant to be Sandra Oh's show, isn't it? That's the impression I had anyway, and I suspect if she were a more egotistical actress (see Julianna Margulies, ref The Good Wife), she might be somewhat put out by Comer's sudden popularity. Indeed, by comparison, Eve is a bit plain and boring - who wouldn't be? She doesn't seem to enjoy her job, nor have many friends to speak of (not that we're shown, anyway).

She does have a fun relationship with her husband Niko (McDonnell), a high-school teacher, but even this goes down the pan as her obsession with Villanelle grows, along with her refusal to talk to Niko about her work (perhaps he doesn't realise what MI6 actually is?), but Oh does a great job too, perhaps even better than Comer considering how much less she has to work with. You, like her, will likely get drawn into Villanelle's web of chaos before long, and it helps to have a more grounded character to come back to now and then. Also well worth mentioning are Bodnia as Villanelle's charismatic-yet-mysterious handler and Shaw as Eve's seemingly-laid-back boss Carolyn whose deadpan responses and lack of surprise at anything mask her rather more schemey and secretive nature.

It would be very unfair to say Jodie Comer makes this show single-handedly - it's of a high standard all round, from the great cast, script, production values, soundtrack (Villanellle even has her own theme tune!), and even the little things like the episode names and the logo with dripping blood - but it is Comer who has earned most of the plaudits, and deservedly so. She's who will be on your mind between episodes of this addictive show, and it's her scenes you'll look forward to the most.

I also have to wonder just how good this show might be without her. As mentioned, there isn't really that much of a 'proper' story, and it's usually hard to know where things are heading. There are a few sub-plots and hints at grander events behind the scenes, but for us it's all about Eve and Villanelle and their growing obsession with each other. Happily, we do have Comer, and thanks to the superb performances of her and Sandra Oh, their obsession quickly becomes our obsession as well.