Ghostbusters (1990)
By: Sega Genre: Platform Players: 1 Difficulty: Medium-Hard
Featured Version: Sega MegaDrive / Genesis
Also Available For: Nothing (but different games based on the film on most systems) 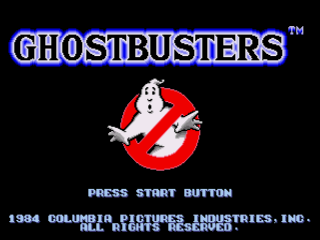 The subject of licensed video games is one that has always struck fear into my heart. Some of them attempt to remain as faithful to their source material as possible (usually movies, of course) while others make no such attempts and often bear almost no resemblance whatsoever. Something that both kinds frequently have in common, however, is that they suck ass. Indeed, a popular thread topic on gaming forums is 'Good Licensed Games?' - there are so few gems amidst the masses of cynical cash-in nonsense that many gamers naturally (and quite sensibly) assume that any they encounter will be crap and don't give them the time of day. However, due to their numbers, it's only a matter of time before I have to start covering them here at Red Parsley, so I thought I'd start with one that's often intrigued me. It at least looked okay in the magazines of the day and, accordingly, it's yet another one that I've often intended to try. Let's just hope I don't regret it!

I've certainly approached the game with an open mind and with an expectation to be entertained, as should be the case when approaching any game I suppose, but I still can't shake a slight feeling of worry. Maybe it's because the film itself is so great but it's also a film that offers ample opportunities for gaming. Unsurprisingly, the genre chosen by Sega for this, one of many games based on the franchise, is a platformer - not an overly original concept but a frequently enjoyable one. Early signs are good too. The game features a reasonable rendition of the 'Busters theme tune before offering you the choice of playing as Peter, Ray, or Egon (poor old Winston, left out again) who vary with regards to their speed and stamina. Ray is slow but tough, Egon is fast but weedy, while Peter is the 'average' character and it was he who I selected first.

Next we're treated to a comic-style intro sequence which shows our heroes receiving their first call of the day before springing into action, or at least the one you've chosen. There are six such calls, or 'cases' in total and each sends you to a location on the map screen which must be cleansed of any particularly troublesome spectres. You can play the first four stages in any order you like, although as is often the case in these situations it's advisable to play them in the right order anyway! Each takes place in a building within the same town (New York?) and comprise the large, multi-tiered stages which are filled with evil spooks. Sadly, the 'normal' ones respawn alarmingly easily and so are basically infinite. It's the middle and end of stage bosses which are your main objective and they're predictably much bigger and tougher, but getting to them isn't easy either. 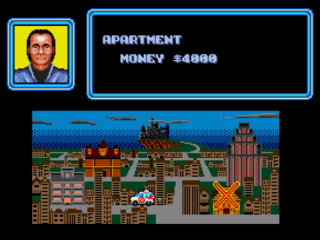 There's usually one or two middle bosses before you face the end boss but one stage has four of them! They all present a significant challenge as well, at least until you've had a decent amount of practise. Your chosen Ghostbuster is able to beef up his attacks a little though. They all start with the 'normal shot' which is a fairly rapid-fire forward shot and is enough for most normal enemies and the first few bosses, and you also have a few short-range but more powerful bombs. Successfully clearing a building of ghosts earns you money, however, which can be used to buy weapons and items including more bombs, energy refills, and an infra-red scope. The weapons are the most interesting items though, of course, and they include the Bubble Projectile gun, Phaser Shells, 3 Way Shot, as well as explosives, a Special Suit (shield), temporary invincibility. Most of the extra stuff also uses up energy so buying an extra energy tank is a good idea too.

As well as getting paid for completing a stage, you can also get money from one other place. It seems that the 'Busters aren't above looting as any safe encountered during the stages can be blasted open and emptied! Beware though - they don't don't always contain money. The design of all the stages is generally pretty similar. Each involves lots of running backwards and forwards, climbing ladders, and leaping around many small platforms. Each player character has a life-meter but the speed that it's depleted depends on which character you're using. All of them, however, are knocked backwards when taking damage so it's easy to be knocked from a high platform and fall all the way back down. There are a few friendly ghosts here and there that help you though, like a blue guy who acts as a springer, and good old Slimer flies past now and then too, and shooting him gives you either more life or more energy.

Unfortunately, whilst very helpful, Slimer and friends don't really do enough to ease the rather harsh difficulty of this game. One problem is the constantly re-spawning enemy ghosts. They don't take too many shots to kill, especially if you have a fancy weapon from the shop but it's better to save them for the bosses (you can 'activate' them from the pause screen) and the default gun can be frustrating to use. It seems to have a slight delay in firing which means the faster, tricksy enemies have usually moved elsewhere by the time your shot reaches where it was supposed to. With some enemies, even some of the most basic ones like the hopping blobs, you can end up losing a whole life trying to shoot one while it leaps back and forth avoiding your shots while knocking you back and taking your energy. Then, you've finally killed it and got back to where you were to begin with - and it's back!

For the first few stages, these leaping blobs are probably the most common enemies too. Considering the potential the source material offers, and particularly the liberal approach to it with regards to following the movie's plot (to say the least), there are surprisingly few different enemies to be found. Some are as basic as flying plates or sheet ghosts while others are a bit more imaginative but still nothing special. The most impressive enemies are also the toughest to defeat - the bosses. These damn things will have you cursing incessantly if you're anything like me, and they'll use up an alarming number of lives as well, but they're definitely the best-looking sprites in the game including our heroes who are rather squat, almost super-deformed versions of their movie equivalents. The presentation is pretty good throughout though, with a nice map screen and cut-scenes before each stage, and the music isn't bad either, consisting of some fairly atmospheric choons for each stage.

The difficulty does make it a frustrating game though. The difference between the three 'Busters isn't huge but it is noticeable, and there are three difficulty settings to choose from on the options screen, but it remains easy to take damage which, as mentioned, knocks your character backwards resulting in many sizeable plummets. Then, of course, you'll have to fight your way back through the same bloody ghosts that you smacked up the first time, assuming you didn't die! There are ten continues though so it's not all bad. The stages are filled with platforms of various sizes and types so some fairly precise movements are required but the design of the stages doesn't vary much with the exception of the colours used. Sega have used the license pretty well here though - it's based on the franchise generally rather than the film specifically but it does have a decent Ghostbustery feel about it so fans will almost certainly embrace it far more enthusiastically than everyone else. Give it a try if you enjoy a challenge!