Lightguns, huh? Nintendo were making them before they even made videogames but when the gaming boom arrived the arcades were suddenly adorned with impressive-looking cabinets with guns mounted on the front or in holsters on their sides as well. As always though, companies quickly sought to replicate arcade frolics on home machines. Nintendo, fittingly, were the first with the Zapper for their Famicom/NES and Sega soon followed suit with their cooler-looking Light Phaser. This was of course the one I owned - my Master System was actually bundled with it since I had the spiffing Master System Plus package which meant I had the mildly amusing Safari Hunt with which to test my trigger finger. It didn't take long until I had other games in my sights though, and here are the five best.

Special Note: These games obviously can't really be emulated properly so the screenshots are all from the attract mode or the first few seconds of the first stage! 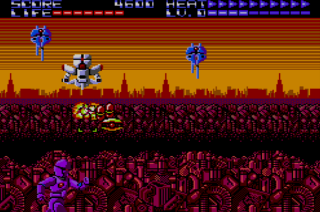 Surprisingly, this game is one of the only sci-fi games that could be used with the Light Phaser, and even more surprisingly it didn't originally even use the device at all. For some reason, Sega released it as a normal pad-controlled game before later re-releasing it with a Light Phaser mode. Apart from that though, both versions are the same and pit you against a hostile robot horde as the last human warrior, Joe (must've taken the R&D department a while to come up with that name). The game begins with a short target-practise challenge which will determine the difficulty of the main game before challenging you with six side-scrolling, first-person stages, the high-point of which is the lovely graphics, but the robotic onslaught provides a satisfying and enjoyable Phaser work-out too. 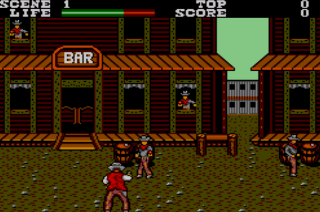 There just had to be a Wild West game to make adequate use of the Light Phaser and Sega did not disappoint! Wanted predictably sees you cast in the role of a sheriff charged with cleaning up a series of towns and locations and earning reward money in the process. The game is unusually viewed from a third-person perspective this time with your sheriff shuffling along the bottom of the screen as it slowly scrolls and the bandits pop out of windows and from behind a variety of scenery. You have to be careful to shoot only the bad guys and avoid the innocent bystanders so it's not just aimless blasting, and there's also a bonus round, or 'challenge scene', between some stages to mix things up a little. Wanted may be a little clichéd but its six stages are also great fun. It's just a shame it doesn't come with a six-shooter! 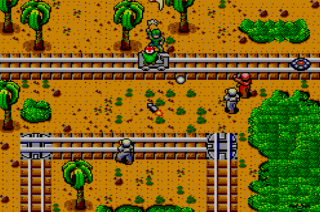 Unlike all the other games on this list, and probably unlike all lightgun games on every system, Rescue Mission is actually an overhead-viewed game. It has a fairly interesting premise too - your unseen character (who must be high above the action in a helicopter or hot-air balloon or something) is responsible for protecting an army medic who moves around five small stages on a rail-cart rescuing injured friendly soldiers. There are three difficulty levels and each of your lives is represented by a different character. Enemy soldiers converge on the rail-cart from all directions and fire bullets and missiles at them, and there are mines on the rails too, which must be destroyed before the medic reaches them. I've always been very keen on this great-looking game which, unusually for a lightgun game, has actually had a bit of thought and creativity put into it. It could've been a bit longer and had a larger variety of enemies but it's still an original and highly enjoyable little game. 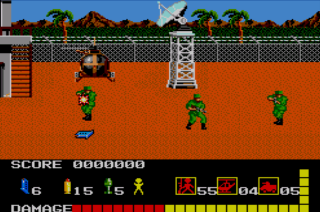 Ah, the mighty Operation Wolf - devourer of so many of my silver coins when I was younger, and recipient of so few decent home conversions as well. Actually, that's a bit harsh as some of them were pretty good (I had a lot of fun with the version for my Speccy, for example) but it's a game that was made to be used with a lightgun (a bloody great Uzi, no less) and playing it without one just doesn't feel right. Thankfully, the Master System provided one of the few opportunities to play Taito's classic 'properly'. Doing so will probably wear out your poor old Light Phaser though, as there's no auto-fire option. Graphically, there's quite a bit of sprite flicker but the stages do look nice here and all the intro screens are intact as well. It's not perfect but the chance to play Op Wolf with a lightgun means it can't be passed up! 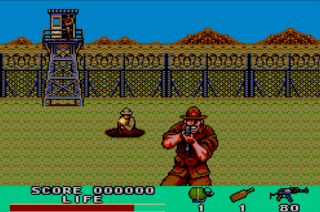 Beating Operation Wolf to the punch, however, was this. Games based on Sly death-fest, Rambo 3, were made for most systems of the day with Sega producing two themselves - one for the imminent MegaDrive and this effort which was made very much in the style of Taito's game. That means it's filled with machine-gun-toting soldiers who either stand right in front of you or pop out of various hiding places, some soldiers with more powerful weapons like mortars, and the occasional helicopter gunship. It's not very original and it doesn't take too long to finish, but the graphics are pretty good and far less flickery than Op Wolf, and I've always greatly enjoyed playing it anyway. Plus it only appeared here on the MS which makes it even more special! If you have an actual Master System and Light Phaser, this is the one to go for if you ask me...
Posted by RetroKingSimon at 21:03