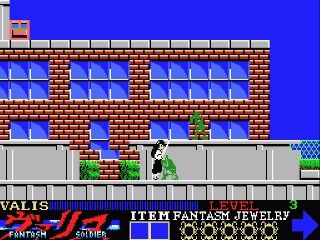 Like most Western gamers, my first experience of the Valis series came courtesy of the various MegaDrive ports that appeared in the US but the series first appeared on the MSX, so it was here that I had intended to reacquaint myself with the series. After booting the game up on the mighty fine BlueMSX emulator to grab a shot of the title screen, however, I had a quick try of the game and was immediately so turned off by it that the review has lain dormant in my 'drafts' section for weeks ever since as I've been too scared to return to it! I finally summoned the courage to give it another try just this past weekend but alas, I still found it to be a thoroughly unpleasant experience. This is largely due to the repetitive, flickery graphics which somehow renders the infinite enemies intermittently invisible. The main character is animated unappealingly as well, and the awkward controls make the apparently never-ending first stage an absolute chore to play through, so I'm afraid I've had to relent and seek refuge in the MegaDrive version which will instead feature in the forthcoming review! Sorry but I did try!