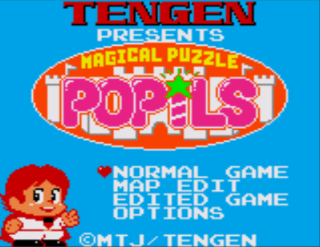 Of all the hand-helds released in the wake of the Game Boy's monstrous onslaught, none were particularly successful but I think you'd have to say the most successful one was Sega's effort. However, although slightly superior to the Master System from a technical point of view, games released on it were mostly ports of titles on Sega's older console. Exclusives were much rarer but there were a few, and one of them was this unusual puzzle game which, curiously, arrived courtesy of the usually-multi-format publisher, Tengen. As is often the case with puzzle games, they've seen fit to incorporate a story of sorts which really doesn't make an awful lot of sense, but it doesn't hurt to try I suppose! The nameless boy whose actions you direct, you see, recently met a beautiful princess and they fell in love. No sooner had that happened, however, then the jealous Wizard of Forest Popil kidnapped her and trapped her in his labyrinth!

It doesn't take a genius to see where things are leading from here but what is remarkable is the size of the labyrinth in question. Each side-viewed stage is only a single screen in size but there are a hundred of them in total! They vary in how much of the screen they take up but they're built out of blocks that fit onto an invisible 10x8 grid. Every feature in the game takes up one of these spaces including both the hero and the princess, the latter of whom is trapped somewhere on each screen's structure. These are comprised of varying quantities of gold 'hard' blocks, grey 'soft' blocks, spikes, ladders, doorways, and enemies. Our hero is capable of performing a powerful punch which can destroy the grey blocks and each one taken out means the blocks sitting directly on top of it all move down one, and it's this mechanic which forms the basis of the puzzles in Popils.

The princess can walk left or right - she does so automatically in fact - but only along a flat surface. Neither her nor her boyfriend can jump and she can't even use ladders, so the blocks on each stage much be destroyed very specifically in order to reunite the pair. Spikes will kill either of them, although strangely, our lovestruck friend can destroy them, but for some reason his Fist of Doom is ineffective against the 'Slimes' and 'Vampires' which make up the enemy roster. These pesky creatures behave in the same way as the princess with one vital difference - contact with one equals death rather than rumpy-pumpy - so they must be avoided or trapped via effective block management (i.e. breaking the right ones!). Some stages also feature 'Warp Doors'. There are three different types of these which always appear in pairs; enter one and you'll reappear from the other.

It all probably sounds fairly straightforward on paper (or screen) but some of the puzzles are fiendishly difficult to work out! Fear not though, for even if you do somehow end up conquering all one hundred of them, there's a neat 'Map Editor' here which lets you create your own stages, and you can even save a decent number of your favourites, although you can of course save as many as you like via the wonder of emulation! Everyone without the brain power of Professor Yaffle will have plenty to get stuck into with the actual game though - I'm not going to pretend I can get anywhere near the end myself, but I'm sure having fun trying! Like many puzzle games, the audio and visuals aren't its strongest points, but it's pleasant enough. There's just the one in-game tune (as far as I've gotten in the game, at least) and while catchy, it does get a bit repetitive. The graphics are also rather repetitive, although it's more understandable in their case, what with the entire game consisting of stages constructed from only a handful of different blocks.

I suppose it wouldn't have hurt to have a few more backgrounds or different 'skins' for each block type, but never mind - Popils certainly isn't an ugly game in any case and the limited number of different blocks means the stages need to be meticulously designed and this is the game's strength. Stages are unlocked in groups of five as you progress which can be played in any order and some are easier or more obvious than others but this isn't a game you can just aimlessly blunder through - planning and forward thinking are required and should, in theory, mean any trial-and-error is kept to a minimum. In this regard, it shouldn't come as too much of a surprise to find that Popils is the work, the final work in fact, of the now sadly deceased Fukio 'MTJ' Mitsuji, the creator of the all-time great, Bubble Bobble. Unsurprisingly, his last game doesn't best the '86 classic but it's definitely a massively enjoyable, addictive, and fantastically designed puzzler that's well worth seeking out.