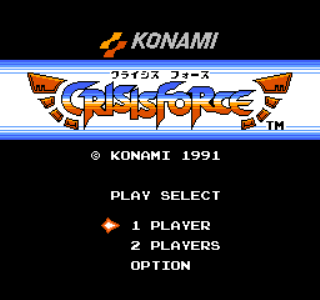 Of the Top Five Shmups lists I've compiled so far here at Red Parsley, the one that's garnered the least attention was probably the NES one. Not too much of a surprise there I suppose - unlike the likes of the MegaDrive and PC Engine, Nintendo's console is hardly renowned as a shmuppers paradise. It does host some impressive examples though, and of the attention its list did receive, most of it was asking was Crisis Force wasn't included. One answer to that perfectly valid question is that, because the game was only released in Japan, I wasn't too familiar with it. The better answer, however, is that I simply preferred the games there were on the list! However, that's not to suggest that Konami's game is a stinky pile of plops though, and it's high time it was dissected in more detail. Due to its exclusively Japanese nature the story wasn't immediately obvious, but further investigation reveals that it's actually a battle against the forces of Atlantis! 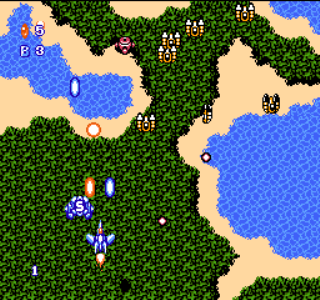 It seems the disappearance of the fabled land of Atlantis was caused by seven monsters who have now reappeared and begun levelling our civilisation as well, using the ancient weapons of the lost city against which our meagre arsenal proved useless. Enter Asuka and Maya who were typical high-school students with mundane lives until the monsters began their reign of terror. Now they are awakened to their true destiny as children of a brave warrior of the ancient Mu civilisation (the ones The KLF sing about?). Using their newly excavated Aurawing aicraft, they must launch an assault on the terrible evil before it's too late. What this means to us mere 'mundanes', of course, is a vertically scrolling shooter; in this case one which consists of seven stages and takes in various environments of our very own humble planet. As you may have guessed from the inclusion of two 'heroes', it also means that Crisis Force offers single or co-operative play so you and a friend can follow your destinies together. 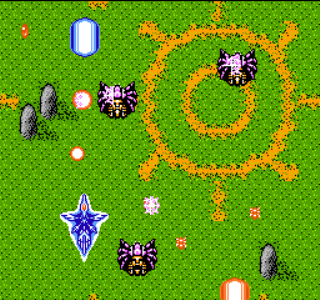 Considering their age, these Aurawing contraptions are quite advanced things and they can be beefed-up further still by collecting the good old power-ups. Aside from the usual speed-ups (and there are also speed- downs here!), there are two types to collect. One alternates between blue and red which represent different weapons. Collect successive blue icons to gradually power-up your default weapon - a fairly powerful forward shot with limited range, or collect red icons to power-up the other available weapon - a wavey shot with a greater range. If you collect one colour of icon whilst in possession of a powered-up version of the other, you'll still start off at the lowest power-level. Splendidly, however, the two weapons each have three different configurations that affects the type of shot you fire. They generally change the distribution of your shots by adding side or rear shots whilst reducing your forward firepower, and you can switch between each setting at will. 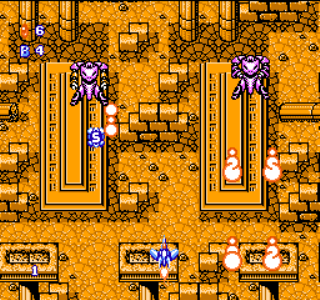 Your ship is also equipped with a limited number of powerful bombs and these differ as well, depending on which configuration your ship is in. As mentioned, however, there are two power-up icons. The other is a yellow/gold one which, once you've collected five of, turns your ship into a bigger and much more powerful craft for a limited time. You can't lose a life in this form but takings hits reduces the time limit more rapidly. Collecting more icons while already transformed, however, will extend the time limit, and in two-player mode the two Aurawings combine when in this state. There's also an occasional 'S' icon which is particularly helpful when you've just lost a life as it will restore some weapon power. As long as your weapons are powered-up though, you can take a glancing blow from an enemy without losing a life, instead losing the power-ups, but there's plenty of those drifting around as they're released by one of the most common enemy ships which do little else. 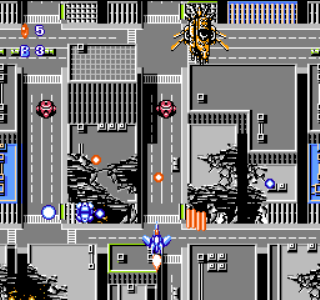 Other enemies are the usual mix of tiny ships that you can wipe out in droves with even your default craft, tougher medium-sized ones which take a bit more punishment, and bigger middle and end-of-stage bosses. There are no ground-based enemies or scenery-mounted guns here but the ships come from all over the place and fire several different kinds of bullets, although some of them can be shot which is rather handy as this can be a pretty tough game! The enemies are fairly plentiful and some are very small and very quick, and their shots vary in speed as well. The bosses aren't always very creative but are also tough, especially if you lose your power-ups midway through. Power-up ships do flit onto the screen during these battles but attempting to collect the icons can result in more deaths than not so it's sometimes a better idea to just concentrate on dodging its bullets (and sometimes the boss itself!). 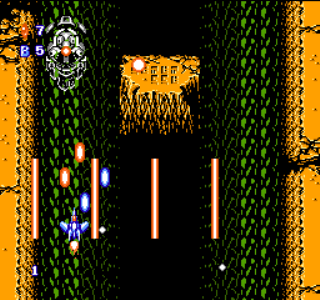 It's not just the enemies that you have to keep an eye on though - the third stage takes place through a chasm which has some tricky sections with rock spanning the width of the screen with only small gaps to make a dash for, for example, and the fifth stage features a load of erupting volcanoes and fire spewing from the ground! In fact, most of the stages take place over varied and changing backdrops and this is one of the best things about the game. As is often the case on the NES, the colours are a little dull and don't vary much but the backgrounds are mostly superb, featuring everything from cities, ancient ruins, and coastal areas to some much more alienish ones. The sprites are quite well detailed and varied but there's some flicker and slowdown if too many crowd the screen at once and the explosions and weapon effects are quite poor. Overall this is a pretty nice-looking game though, and has decent scrolling including some parallax. The audio isn't bad either. The tunes aren't especially catchy or memorable but suit the action well enough and the effects are quite good although a little confusing sometimes - many times did I hear my ship taking a hit only to find it hadn't after all! 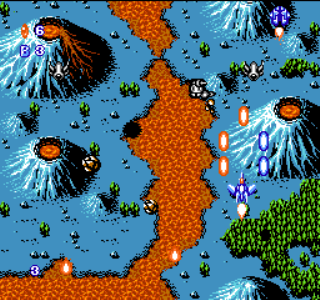 The big question though, has yet to be answered - is it good enough to earn a place on the Top Five list? Well, I'm still not sure to be honest! It seems to tick all the boxes but shoot 'em ups have to be satisfying to play and that's about the only thing I could say this one lacks. It's certainly not boring - the action is more-or-less non stop and the excellent weapon system and the appropriately-varied enemy attacks mean you're always on the move, especially on the later stages which can get very challenging indeed. It's not a game that suddenly becomes impossible when you lose your weapons though, even when fighting a boss, and the controls and collision-detection are also good enough, so it's definitely a top blaster and it would be even better if the colours were more varied and the explosions and weapons effects were better. It seems wrong to criticise Crisis Force as it's clearly had a lot of effort put into it and the result is so nearly the finest shmup on the NES, even on any 8-bit console - it just needed that little spark that makes a good game great.