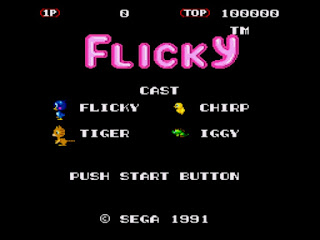 Originally released in the arcades way back in 1984, Flicky is perhaps one of Sega's lesser known titles but there's a good chance you've seen a bit more of the tiny creatures that you might expect. Flicky himself is a small blue bird and protagonist of this game which marks his first appearance. However, it seems that the name may actually refer to a whole family or species of bird, for many multi-coloured versions of Flicky have appeared in later and more well-known games. Most notable among these is a particular game starring a far more famous blue creature, this time with spikes rather then feathers, and it even featured their name - Sonic 3D: Flickies Island! It therefore seems likely that the nippy little things have flourished since this first game, so let's take a look at where it all started for them.

Flicky in the singular sense is, as mentioned, a small blue bird, but apparently one of many heroic virtues. His game is viewed from the side and made up of forty-eight rounds which each consist of short (one screen wide), scrolling, and infinitely looped arrangements of fixed platforms. Scattered around these platforms are a number of small yellow chicks called Chirps, all of which Flicky must rescue before moving on to the next round. There's also a bonus round every few stages which charge you with catching catapulted Chirps with a net! There's no time limit on the normal stages but you'll get more points the faster you save all the squawkers. The Chirps are more-or-less evenly spaced apart and each one rescued will tag along behind Flicky until he leads them to the exit. The more Chirps he takes at once, the higher the bonus he will receive. Sounds simple enough but, of course, it's not! Patrolling each round are several cats called Tigers who are hungry and like nothing more than chowing down on Chirps or even Flicky himself!

The Tigers can't touch the Chirps while they're apparently floating in mid-air awaiting rescue, but the pesky felines can knock them from the trail following behind Flicky and if that happens they'll need re-rescuing! Flicky himself also loses a life if he's touched by a Tiger and any Chirps not already taken to the exit need to be saved again. Also, in later rounds a green iguana, called Iggy appropriately enough, starts appearing who can climb on walls so he's just as dangerous. Flicky is quite nimble though - he can run pretty fast, jump quite a long way, and change direction mid-jump, but aside from these movements there's just one way he can defend himself and his Chirps. Most platforms have various random objects on them such as flower-pots, telephones, or apples. Flicky can pick them up one at a time by running into them and release them by jumping which sends them flying forward, taking out any enemies they hit in the process.

It's a simple and fast-paced game and that means, like other games of its type, it can be made or broken by the slightest detail. One whose importance is often understated, in my opinion at least, is the accuracy and responsiveness of the controls. Happily, that aspect of Flicker is excellent. The titular character moves with a bit of momentum though, whether running or jumping, so he can't stop dead when a Tiger pops out of a cat-flap in front of him, but unfair deaths are kept to a minimum due to the small size of the sprites and the fairly forgiving collision-detection. The many stages are also nicely designed for the most part with good use made of the limited space available. Most could be completed in less than a minute without loss of a life by a skilled player and even quicker with a bit of practise but this isn't an especially easy game with player mistakes being common (for me at least!), and even if you did manage to defeat all forty-eight stages, they just start again but harder!

Up until playing it for the first time recently though, my abiding memory of this game was the magazine coverage it received in which its reviewers implored readers to ignore the rather poor graphics and give it a chance. Looking at it now, I wouldn't say it's a ugly game by any means - the sprites are small but appealing and the backgrounds are varied and change every three or four rounds - but at the same time, they hardly push the MD and nothing's been updated since the arcade original seven years earlier. Likewise, the audio is pleasant enough without ever impressing too much - one catchy but repetitive tune and nice effects - but these games are rarely made to impress with their aesthetics. I suppose it wouldn't have hurt to tart the game up so long after its release but Flicky remains a superbly enjoyable and very addictive game, and the mild degree of risk/reward for the between-background-change bonus rounds, and particularly the Chirp bonuses, offers good opportunities for high-score chasers. Forget Sonic 3D and see Flicky at his best instead!