It was about twenty years ago now that the world first heard the name of Quentin Tarantino. The former video-store clerk achieved what so many in his position want but so few manage - to make his own films. Some people were quick to dismiss him as a copy-cat artist, taking the work of others and putting his own spin on it, but but these people are missing the point - he's a geek and like many geeks his age he grew up watching movies so it's inevitable that they'll have influenced him as a film-maker.

Not all his inspiration came from others though and he soon forged a very distinctive style of his own with the results seeing him quickly become one of the most famous writer/directors around. I think I speak for a lot of movie fans when I say the imminent release of a new Tarantino film is an exciting time but he takes so long to make new ones that we have plenty of time to digest his previous efforts too. Here are my five favourite: 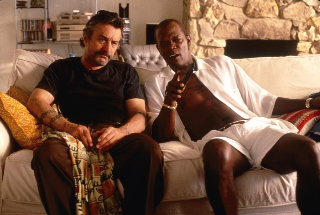 For his third full film, QT adapted Elmore Leonard's novel, Rum Punch, and it constitutes his homage to the 'blaxploitation' films of the '70s. It also sees him continuing his apparent habit of resurrecting the careers of former big names and stars Pam Grier as the title character, an air hostess who supplements her income smuggling money for gun-runner, Ordell (Samuel L. Jackson). Also starring Robert De Niro and Bridget Fonda as dopey goons roped into helping Ordell, Robert Forster as a bail bondsman, and Michael Keaton as an ATF agent, Jackie Brown is a more linear film than we're used to seeing from Tarantino and lacks some of his trademark touches, but it proves to be an intelligently-crafted and superbly-paced film with lots of memorable scenes. 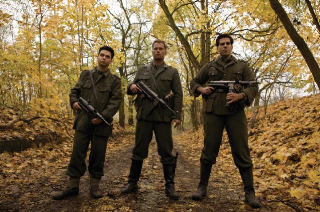 As soon as I heard that QT was making a WWII film I was sold! After its announcement, it took him a good decade to get around to actually making it though, and when he did it had a cast largely devoid of the kind that he usually uses - Brad Pitt was the star for one thing - and it's also a film that lacks the kind of setting he's used to. Contrary to initial beliefs, it's not a remake of the 1978 Italian film, The Inglorious Bastards, and is instead a story of two plots to take down the Nazi leadership - one hatched by a squad of ruthless Jewish soldiers led by the impressive Mr. Pitt, the other masterminded by a vengeful Jewish cinema owner played by Melanie Laurent. As you might expect, QT hasn't gone for complete historical accuracy but that doesn't stop him from entertaining your socks off with this big, brash, and bold film. 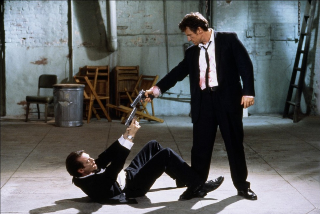 Dogs was QT's first full film but many people, myself included, didn't actually see it first as it was hardly promoted at all. That didn't stop it from making a huge impact on most people when they did see it. The premise of the film is simple - it's set in the aftermath of a jewel heist gone bad - but it's how the story is told that makes it so great. It instantly introduced us to QT's distinctive style with its masses of snappy, memorable dialogue, pop culture references, events not shown in chronological order, graphic violence, and of course the amazing soundtrack - who, since the film came out, has listened to 'Stuck in the Middle With You' and not thought of a particular grisly scene from this film?! Ground-breaking and still immensely entertaining. 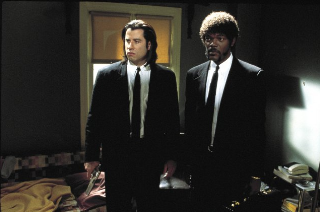 Few films have launched a career like this one did for QT. It's also the longest film he's made so far is very nearly the best in my opinion. Most people would probably say that it is the best actually, and it would be hard for me to argue with them, such is its greatness. Dividing the film into several inter-linking chapters, again not told in chronological order, was risky but it was implemented well, and casting John Travolta and Sam Jackson as charismatic gangsters, Vincent and Jules, was a masterstroke which helped the careers of both actors no end. QT also managed to accommodate very memorable characters for Bruce Willis, Ving Rhames, Uma Thurman, and Christopher Walken as well. Phew! Even those who aren't fans of violent gangster films can't help but like this one, and when it's so intelligently made, who can blame them? I never did find out what's in that briefcase though! 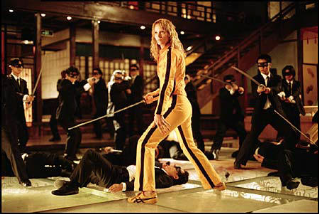 Okay, maybe it's a bit of a cheat to include both volumes as one, but hey - that's how QT regards them so who am I to argue with the man himself? Watching The Bride carry out her "roaring rampage of revenge" en route to her inevitable appointment with Bill is a tremendously satisfying experience too. She shouldn't be an especially sympathetic character really - she is after all a killer for hire who probably killed dozens of people before the events of the film, so the fact that QT has us enthusiastically cheering her on is a testament to his writing skills as well as top-notch direction. Ms Thurman is also in outstanding form in the main role and convinces completely as a martial arts master and assassin. Most of QT's films are a homage to one or another of the genres he grew up watching but Kill Bill pays tribute to several all at once, and you could say he trumps them all. News of an upcoming third volume in the series has got me excited all over again too!


Special Note: Compiling this list got me thinking - in the twenty years since Reservoir Dogs, QT has made only seven of what you might call actual 'proper' Tarantino films (and that's including Django Unchained which isn't out yet!). Considering he's said that he'll retire by the age of 60, that means we've only got three or four more films to come from him. Oh nooo! :( Make 'em count, QT!
Posted by RetroKingSimon at 19:23