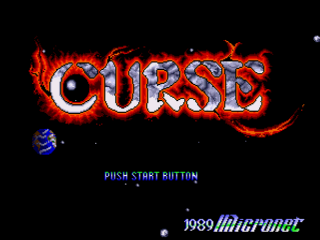 Considering its heritage and reputation among shoot 'em ups fans, it's surprising that Sega's MegaDrive has so few games of that type that weren't available anywhere else, and even less that only appeared in one of the main territories. This game however, a fairly early release from Micronet, is one such title. Only Japanese MD owners had the option of playing it (legally) but that didn't stop it from getting some space in one or two of the gaming magazines I frequently perused around that time. It never seemed to get spoken about with much affection but I always remember it looking lovely in screenshots. Playing it for this review confirmed that I remembered this detail accurately but would it also confirm why the reviewers of the day didn't like it? It didn't appear so, at least initially...

Not only is Curse set in a world far away from pesky Humans but it apparently even takes place in a whole different universe (how many are there?), and around two planets in particular - Parceria and Seneca - whose inhabitants have peacefully coexisted for millennia. However, the Parcerians suddenly broke off all contact and over the course of the next few hundred years their once-lively planet slowly turned into a dead, barren rock. Until one day a huge attack force suddenly left Parceria and attacked Seneca without warning. Using an unknown power and clearly under outside influence, the Parcerians were able to manipulate the local wildlife to help them in their onslaught. However, just as all hope seemed lost, the people of Seneca discovered an ancient but powerful star fighter long abandoned on their planet by the Parcerians. A chance beckons?

As you may have guessed from that backstory, the five horizontally-scrolling stages that make up Curse have a distinctly organic feel to them. Your ship looks a little like the one from the Gradius series to my eyes and starts the game nearly as slow and weedy as the splendid Vic Viper too. Luckily, plenty of lettered power-ups are produced upon the destruction of certain enemy vessels. A speed-up (S) should be your first priority but there are several other icons too. There are three different weapons available - a Wide Beam (W), a Spread Laser (V), and something called the Crash Shot (C) which fires fragmenting spheres. Your ship can only carry one of these weapons at a time so each time you collect an different one it will replace your current shot. They can all be powered-up by collecting successive icons though, and you can also add scenery-crawling missiles (M) and a splendid positionable Option.

Actually, you can have up to two Options at once but, unlike the hypnotic devices in Gradius from which they take their names, they don't swoop around following your every move. You can instead deploy them either in front of, behind, above or below your ship from where they will block incoming shots as well as popping off a few (fairly weak) shots of their own, which basically gives you the option of an up, down, or rear shot. Even more splendidly, your ship is also equipped with a Star Trek-style energy shield which can absorb up to three shots from or glancing collisions with enemy ships. Its reserves can be replenished by collecting yet another icon (E) but beware - touching any part of the scenery will usually result in instant death and it's not always obvious what's in the foreground and what's in the background!

This brings me to those nice-looking graphics mentioned earlier. Each stage is named appropriately enough - Jungle, Clouds, Caves, Space, Warship Mother - which should give you an idea of what they look like. The first is rather appealing with all its nice greenery and makes a great first impression but the rest aren't quite so pleasing. None of them change during the course of the stage and the enemies found in each, while quite detailed, vary little and most of them aren't very memorable. Some of them have nice parallax scrolling though and, as mentioned earlier, all five have stuff you can crash into. The ground-based ones have trees, tentacle things, mountains, and the metallic junk, while the other two feature big, indestructible rocks that fly across the screen fairly regularly. The asteroids (or whatever they are) are fairly obvious but you might end up losing a few lives discovering what the other non-ship friendly things are as I did!

Talking of stuff flying across the screen, that was one thing that surprised me about Curse - the enemies launch a hell of a lot in your direction! Although there's the odd missile or laser, they fire two main types of shot at you - gold rings which can be shot, and small brown bullets which cannot, and there are frequently masses of each. It almost feels like a bullet-hell game at times! Your ship is armed with a few (rather unspectacular) smart bombs which clear the screen but it soon fills up again. To the game's credit, there's no slowdown or flicker though, which is probably the most impressive thing from a technical point of view. Each stage also has a mid and end boss and some of these are pretty good. The first is a lovely multi-coloured hummingbird which I always feel guilty for shooting while others include some slightly stranger creatures (including cool curly dragons) as well as the more usual big alien ships.

Despite a few nice features though (like the gradually-changing sky colour on the first stage), Curse isn't a particularly original game. About the only thing that surprised me while playing it is how easy it is, at least compared to most shmups. Okay, maybe it's not a complete walkover - some sections require some good bullet-dodging skills and the (rather short) final stage has some pretty tough obstacles, but with only a little practise this is a game that it would be possible to 1cc, especially since the bosses are rather weedy. In fact, it might have to be with one life rather than one credit as you'll lose all power-ups when you die and it's damn hard to get powered-up again! I did rather enjoy playing it through anyway though, and it was quite satisfying to finish it. The soundtrack is decent (although there are almost no effects beyond a poor 'explosion' noise) and the collision-detection is good which makes this a fairly entertaining fifteen minutes or so. I just wish Micronet had put as much effort into the whole game as they did the excellent first stage.