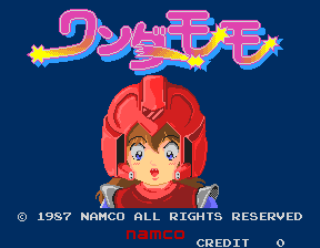 Somewhat surprisingly, leading female protagonists in video games are still quite a rare thing but in the 80's they were about as common as unicorn poop. Some games like Ms Pac-Man barely made a token effort while others like Metroid cleverly concealed the truth but one game that did neither of these things is Wonder Momo, a strange Japan-only game by Namco. It's apparently set in a theatre where you, as a young girl called Momoko, take centre stage. It's viewed as if sitting near the front of the theatre but, of course, it's no ordinary stage. Approaching young Momoko from either side are numerous costumed enemies whom she must despatch before a larger and stronger enemy character appears. I'm not sure which kind of audience this show is aimed at but it must make for some intriguing viewing!

The game, or indeed show, is split into four volumes of four acts each. Momoko can walk the length of the stage, which scrolls a short distance left and right from her starting position, and let rip with her rather limited selection of moves. There are two 'action' buttons - one executes a kick which can be performed standing, jumping, or squatting, and the other performs a jump. She can also perform a little twirly move and a splits-kick but that's about it. Her Wonder-Meter is gradually filled as she strikes the enemies but equally important is her Vitality-Meter which is depleted by contact from enemies or near enough anything they produce. At first they don't attack her, although touching them still causes damage, but they soon start shooting stuff all over the place which makes the going pretty tough pretty quickly! Luckily, Momoko has one trick up her miniskirt and that is... Wonder Momo!

After a short while of booting the idiotic enemies around on each act, a noisy whirlwind appears from the left of the stage and gradually crosses it. Walking into it will whirl Momoko around for a second before turning her into the character of the title! Experimentation with the controls later revealed that you can also take this form at any time you want by performing her spinny move, but don't use it too soon as it depletes her Wonder-Meter - run out and you'll return to her normal form. It's worth building up as much power as possible too as it not only gives her a nice, shiny new outfit (complete with helmet), but equips her with a ring called the Wonder Hoop which she can throw at enemies. It's more powerful than any of her kick attacks but she has to wait for it to bounce back to her before she can use it again. All the while, annoying enemies attack relentlessly, and they can become quite numerous and aggressive too. New ones are introduced as you progress and they range from human (or at least humanoid) figures to weird squirming creatures and flying devices.

The toughest enemies are by far the bosses of each act though. They take a good few whacks with the Wonder Hoop to put down, and many times more kicks if you don't have any Wonder Power. They're pretty varied too - the first is an insectoid creature of some sort with long snapping arms but there are all sorts of others such as a gelatinous blob and even a dinosaur! There's even danger off-stage in the form of a photographer who occasionally sneaks back and forth trying to take a peek up her tiny skirt. If he succeeds, she is stunned for a second! Occasionally there are helpful icons to be found though - the red/yellow one refills part of our heroine's vitality while the blue/white one unleashes a super-powerful spinny projectile attack called the Wonder Typhoon which is very handy so it's a shame it's not more common! The icons are most often released by the flying enemies but since Wonder Momo can jump much higher than 'regular' Momoko, they are most often only available to the former.

Considering the unusual, not to mention apparently restrictive premise behind the game, there's actually quite a bit of variety in the graphics. Each act has its own background (matte paintings?) ranging from streets and building sites to tropical jungles and rocky chasms. The sprites range in quality quite a bit but there is at least quite a few different ones. Momoko herself, as is typical of Japanese female characters, wears a skimpy outfit and flashes her panties periodically, and between acts the stage curtains are raised and lowered while featuring her in various (often risqué poses). Possibly my favourite thing about the game is the great music and various sampled comments made by Momoko. There aren't too many different ones but they're catchy and rather appealing which almost make up for the game's biggest problem - the irritatingly unresponsive controls.

Yes, that's right - sadly control of Momoko is quite poor which can cause much otherwise avoidable damage 'n' death. When she touches or is touched by pretty much anything, it knocks her on her backside and when there's as many enemies around as there are on some later stages, she'll end up spending most of her time there. That said, the game is rather difficult anyway thanks to the fairly restrictive space to move around in, and the repetitive nature of the gameplay isn't helped by the limited range of moves and some of the bosses being repeated later on (more powerful, of course, and sometimes doubled up as well), so combine these things with the poor controls and the result isn't the most enjoyable game of its type. It's a game that definitely has a certain appeal but for all its Japanese wacky/pervy intrigue, it's ruined by its numerous faults. Worth a look out of curiosity but it probably won't hold your attention for long.