As much as I enjoyed looking at the diametrically differing standard of Master System cover art, I think it's time I moved on to another system, and if there's one that immediately pops into my head as having almost as severe differences in regional artwork, it's NEC's box of tricks. Of course, in the case of this fine machine it's not just the game covers that differ so much in aesthetic splendour - the console itself was completely redesigned for its North American release.

The sexy, compact white console, famously photographed next to a packet of crisps in C&VG magazine, was almost doubled in size to become the TurboGrafx-16. Why? I guess only NEC can answer that question but sadly the redesigning didn't end there. The TG-16 games frequently came with very basic and unpleasant cover art far removed from the spiffing Japanese covers. Here's a selection of some that I've happened upon so far:

Not only is this game one of the finest vertical-scrollers on the Engine but it's one of the best I've ever played! The Japanese cover, while not especially brilliant in itself, has become hugely iconic and loved among shmup fans. This is probably due to a combination of the large, bold, distinctive font used for the title, and the fact that the game effing rules! The ship looks pretty cool and imposing as well though, and the background, which partially features blueprints of probably the same ship, isn't bad either. The American effort on the other hand, as well as unnecessarily changing the name to some generic nonsense, also features a much less cool ship aiming a shot toward a distant and largely undecipherable ship. It is a ship which features in the game, admittedly, but it's still a pretty stinky cover for a cracking game. Bah! (full review here) 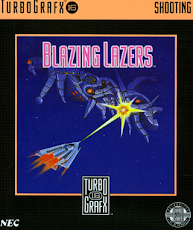 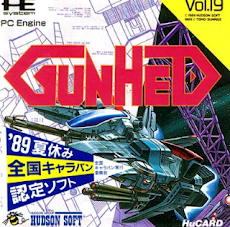 Ah, good old Motoroader - a game I was led to believe was great for many years until I actually played it recently. Urrghh! Anyway, the Japanese cover simply shows a close-up of some mean-looking car, although it does also include the splendid Masaya logo. It's very average stuff but at least you can tell what's going on. I'm not sure what to make of the US cover though. Is it a crash helmet? Is it a weird, distorted view with eyes in the middle of the road? Whatever's going on, it gives the impression of a Victory Run style game rather than a circuit-based overhead racer, and what's with the in-car view? Both are quite poor but least the Japanese one doesn't freak me out... (full review here) 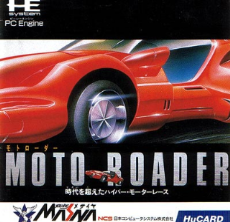 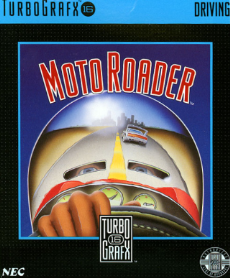 This is a game that I was fooled into buying (for quite a sum before the days of eBay) after reading a rave review in C&VG magazine only to find it featured tons of Japanese text! Grrr! Anyway, the Japanese cover, the largely unplayable one in my collection, does have quite a nice cover which is dominated by the title written on a dungeon floor. A great font has been chosen though, and the shadows of some of the game characters in the corner adds a bit of mystery as well as atmosphere. The TG-16 effort arguably features an image that accurately depicts the style of the game but the artwork is so poor you surely wouldn't have much interest in it based solely on that? On top of that, the font is poor and the characters are strangely-positioned. The decision-makers really didn't do themselves any favours with this one... 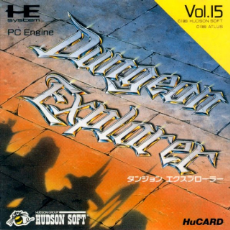 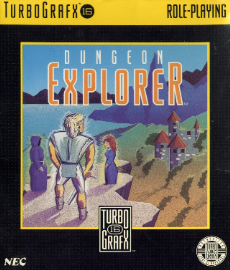 Hudon's supremely awesome Bomberman series is among my favourite game series' ever so it's hard for me to say anything bad about anything of them. The Japanese cover of his début game isn't very helpful for newcomers to his games - it hardly shows any of the details or features of the game, but who wouldn't be drawn in by that simple-but-cute face? I know I'd have picked it off the shelf! The US cover, on the other hand, scares me. It features two rather portly (and incorrectly-coloured) humans in weird suits and while it may show both bombs and explosions, it still gives completely the wrong impression about the game. I know US cover art rarely features anything remotely cute but this is just horrible, horrible. Boo hoo :( (full review here) 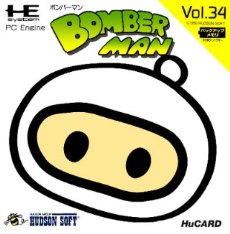 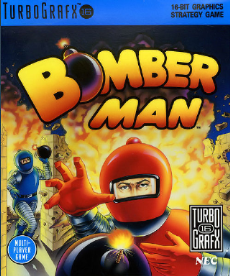 This mighty fine pinball game was among the first Engine games released but you wouldn't guess from the splendid cover. The Japanese one does a better job of pointing out the pinball-ish nature of the game by featuring not one but three actual 'balls' and shows the entire main table of the game including many of its features. The US one isn't actually that bad for TG-16 standards except for the usual (and unnecessary) black border. It doesn't really make it obvious that it's a pinball game but does have a decent representation of the scary alien dude from the lower half of the table and the title is quite eye-catching too. The best US cover yet! (full review here) 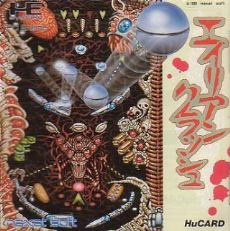 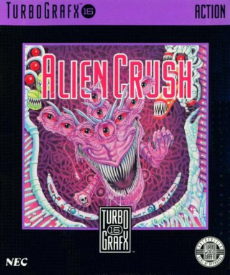 Look out for some more fantastic/dull/scary/horrifying PC Engine and TurboGrafx-16 covers soon!
Posted by RetroKingSimon at 20:47