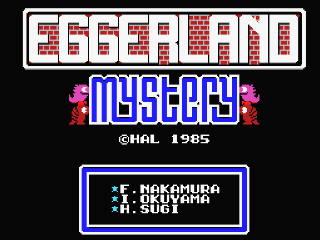 The MSX is a funny machine to me. From a personal point of view, it actually has a lot in common with the NES - both systems were very popular in Japan but neither was remotely successful here in the UK, for example. As a result, I knew little about either machine until more recent years since when I've made a conscious effort to rectify this oversight. Many splendid NES games have been played in pursuit of this and one series I've been enjoying is Adventures of Lolo but it seems that games starring the blue sphere did not originate there. So which system did he first waddle onto? That's right, it was the ever-mysterious MSX! As with other games in the series, it seems that Lolo's object of desire, the princess Lala, has been kidnapped and hidden in the evil enemy underground stronghold of Eggerland. So, for the first of what would turn out to be many times, Lolo must summon the wits and courage to solve the complex labyrinth and save his beloved!

The perilous labyrinth that makes up Eggerland consists of 105 single-screen rounds, each of which features at least one Diamond Framer (a square icon with a diamond on it) but usually a good few more. Each of them must be collected by passing over it before the exit is unlocked allowing you to move to the next round. Sounds simple enough but as Lolo fans will know (including me now!), it's often far from that! This is mainly down to the various enemy monsters. The first you'll encounter is good old Snakey. He does very little beyond sitting there looking funny. He'll turn to face you as you move around him but doesn't attack and touching him doesn't hurt Lolo, he's just there to get in the way really. The other enemies, however, are more dangerous. Some shoot stuff at you when you walk past them (Gol, Medusa), others wake up when you've collected all the Diamond Framers (Skulls), while some chase after you (Alma).

Some of the Diamond Framers will give Lolo magic shots which can be used against the monsters. One hit will turn them into an egg which can them be moved elsewhere or pushed into any of the water areas you encounter now and then to act as a raft. Shooting an enemy that's already in egg form will remove it completely, but only for a few seconds as they soon regenerate. Other features you might come across include Arrow Tiles which restrict Lolo to walking across them only in the direction specified, and some stretches of water have bridges over them, but the most common objects are green blocks called Emerald Framers. These can be pushed around the stage floor (and usually need to be) which Lolo can do freely, but only if nothing is in the way. They can be used to block enemy fire, to trap an enemy altogether, or sometimes they're simply in the way, but if a round contains any, it's a safe bet that you'll need to use them for something!

Indeed, deciding what to move where and at what time forms the basis of a vast majority of the puzzles here. Some trial-and-error is involved, particularly when first encountering a new enemy or feature but once you know what everything is and does, a bit of forward thinking is enough to tackle most stages. There's also a few 'Powers' you can use if you collect special Diamond Framers which allow you to change an arrow tile, create a bridge section, or summon an Emerald Framer out of thin air. That's not to say it doesn't get tough after a while but to help you out a little there's a bonus round every five stages. These are much simpler screens for which you have unlimited magic shots - just take out all the monsters on each to receive a password! If that helps you plough through the game too quickly you'll be pleased to hear that there's also a 'Game B' which adds a time limit and treasures to collect which makes the game twice as long but even tougher too. On top of that, there's even a 'Construction' mode which lets you design and play your own stages!

The graphics are quite basic but I actually really like the look of this game for an MSX title. It doesn't look quite as nice as the later NES games but everything is neat and tidy and the layout of each round is quite varied and colourful. There's also a nice tune playing throughout, although effects are minimal and interrupt the music (not enough sound channels I suppose!). Fans of the Adventures of Lolo series will know exactly what to expect here anyway though - lots and lots of puzzles to work out! Some can be solved on the first try while others will leave you stumped for a good while, but it's rarely a frustrating or annoying game and can be very satisfying. Control of Lolo can be a little sluggish but Eggerland has a noticeably slower pace than the NES games so it doesn't affect things too much, and apart from that it's the same kind of long lasting, leisurely-paced, addictive action we're used to, and if you're anything like me, that's a good thing.