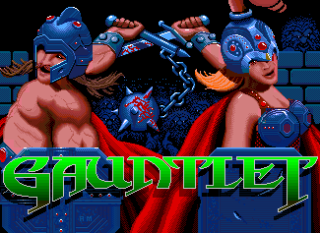 I suppose it was only a matter of time before the 'Maze Games' feature here at Red Parsley arrived at the Gauntlet series for a review but the decision to return to it wasn't a hard one. This is mainly because it's one of my favourite games but I've actually spent surprisingly little time with the arcade original. The decent conversion for the Spectrum occupied much of my time in the late 80's before the fantastic Gauntlet 4 arrived on the MegaDrive (basically a conversion of the first game but with tonnes of extras) and occupied much of my time in the 90's as well! The series certainly has its detractors, though, who argue that it's repetitive and frustrating. I definitely didn't agree with them back then but perhaps time has dulled the appeal of Atari's classic. Henceforth, I shall find out... 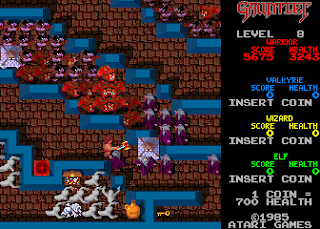 The basic gameplay of Gauntlet (and Dandy - see below) must surely be known by near enough all gamers by now but for the benefit of those who have somehow missed it, it works like this: between one and four players can play simultaneously but first each needs to choose a character from the four available - Thor the Warrior (who has good fighting strength), Thyra the Valkyrie (who has strong armour), Merlin the Wizard (who has strong magic), and Questor the Elf (who is the quickest). From then on, your party (or maybe just you) are faced with an unending series of overhead-viewed dungeons filled to the brim with malevolent beasties intent on shortening your adventure! Whether they do or not is entirely up to you though, as each coin you insert gives your character health points and you can insert coins, and therefore play, forever if you want. 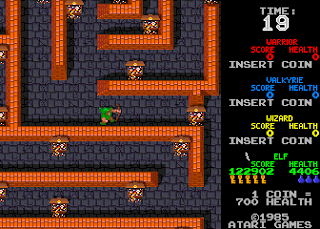 There are six types of enemy altogether - Grunts, Ghosts, Demons, Sorcerers, Lobbers, and Death. All of them except Death are created endlessly by generators placed all around the maze-like stages which have three strength levels with each monster they create being of the same level. The generators can be destroyed in the same way as the monsters they produce - either by shooting or fighting them one at a time or by collecting potions and using magic which clears some or most enemies on screen in one go. The strength of both of these attacks depends on the character chosen although special potions can also be found occasionally which boost an aspect of a character's abilities - extra shot power or extra armour, for example. Watch out though - a pesky thief appears now and then and it's these abilities that he's most keen on stealing. Deaths appears in smaller numbers than the other enemies but they can only be killed by magic - otherwise they'll drain 200 health points before disappearing. Grrrr! 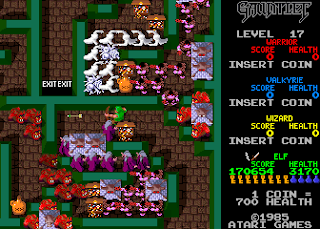 The stages themselves are each around two screens wide by two screens tall, although some loop instead, and they are usually designed in as maze-like a way as possible. Most include several paths, some of which are often dead-ends. There are usually many doors blocking off sections that must be opened by finding keys and some stages feature teleporters which move you to the nearest similar device. Treasure chests for bonus points are abundant but far rarer are special medallions that grant temporary invisibility (the enemies home in on you as far as possible otherwise) which are a welcome, albeit brief, reprieve when they are encountered. Each player character gradually loses health points as the game wears on anyway but contact from enemies does of course reduce them much faster so it's a good idea to keep an eye open for revitalising food which comes in two forms - cider, which can be shot, and what looks like roast dinners, which cannot. 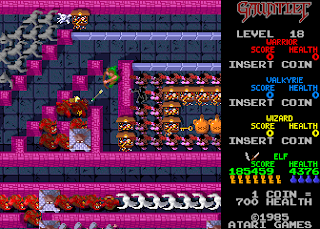 As original and distinctive as it seemed at the time though, the concept of Gauntlet may not have been entirely born in the futuristic labs of Atari's secret underground bunker. Ed Logg, credited as designer of Gauntlet, may or may not have had one eye on an Atari 8-bit game called Dandy, released two years previously, while putting his game together but the two titles certainly have some similarities. Whoever was responsible though, Gauntlet was the game which rose to prominence and it's one that's attracted and maintained a sizeable fan-base over the years. There could be many reasons for its enduring popularity but the simple fact is Atari's game was available to a much wider audience, and arguably came at a much more convenient time as well. 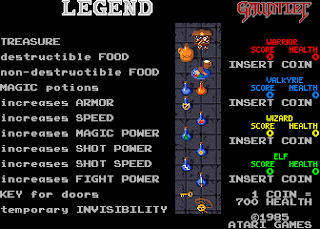 Another reason for Gauntlet's success over that of Dandy could simply be that it was better. It has a huge number of stages for one thing - a hundred unique dungeons which appear in random order from the eighth one onwards, and after the hundredth stage they start repeating as well so it's a game without end! The cast of characters, both heroes and villains are also very memorable too. The differing attributes of each - shot strength and speed, magic power, fighting ability, armour, etc - meant that everyone had their favourite even if the differences between them became purely cosmetic once a few of the special potions had been collected which each boost one that character's attributes accordingly. The relentless onslaught of enemy creatures pouring from their respective generators meant that you rarely get a minute's peace too! 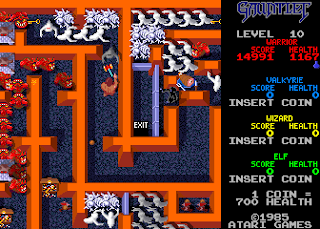 The enormous abundance of evil creatures to slay may make Gauntlet a tough slog for the most part but it's rather impressive from a technical point of view. All sprites, objects and pieces of wall and floor take up one square on an unseen grid of 15 x 15 which makes up the visible play-field so everything is more-or-less the same size. This doesn't take much processing power with regards to the inanimate parts of each stage of course, but the sprites are all animated, detailed, and there are absolutely masses of them nearly all the time. It's still pretty impressive now so you can only imagine how mind-blowing it was at the time! Of course, this did present a challenge to the talented programmers charged with converting the fab game to home systems but even then the results were mostly spiffing! 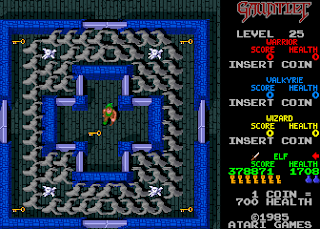 Sadly, the audio here is almost silent though. There are a few simple sound effects but no in-game music which is hard to get used to since the fantastic MegaDrive conversion that I've played so much has had an equally fantastic soundtrack added. Breaking the near-silence now and then though, is the famous voice of the unseen dungeon overseer who offers occasional advice and support. He may sound a little ropey today but back then he was a revelation and his many comments have proved to be almost as enduring as the game itself! Indeed, despite the inane wafflings of the many naysayers, Gauntlet is still great fun and a highly enjoyable challenge. Yes, it is repetitive, as most games in the early years were, but not many of them offered four players the chance to unite and fight evil monsters to the death! Even for the solo-player, the lure of seeing new mazes or achieving a new high-score is enough to keep you playing. A timeless classic that offers a near-unlimited helping of simple, addictive adventuring. Still hate those bloody Lobbers though. Grrrr!