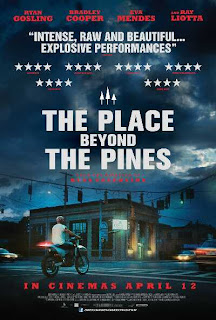 Usually it takes it certain kind of film to draw me to the cinema. I can't talk for any of you but doing so has become an expensive business in my part of the world, costing almost as much as a new DVD in fact. The Place Beyond the Pines is not the kind of film that usually succeeds in enticing me - as much as I love films, I'm usually pretty patient and therefore often wait until a film's arrival on home media - but there was something about this particular release. I'm not sure what either; I wouldn't call myself a particular fan of anyone involved and I hadn't even seen a trailer, I just knew I wanted to see it, so that's what I did, knowing almost nothing about it. Even the beginning of the film itself offered few clues, opening on a heavily-tattooed fellow swishing a flick-knife around in a cramped room as though killing time before abruptly pinning it to a wall and exiting what it's now clear is a trailer in a fairground. It isn't long before we discover that he's actually Luke Glanton (Gosling), a slightly-famous motorcycle stuntman known as 'Handsome Luke' who works for a travelling fair. After his latest show he's visited by Romina (Mendes), a local hottie with whom he had a brief fling during a previous visit. It turns out she now has a baby boy and guess who the father is? Unlike many such men who unexpectedly find themselves in the same position, however, Luke does the right thing - he quits his job and subsequent life on the road to instead look for work in the nearby town of Schenectady, New York, and support his son. As admirable as his intentions may be though, they aren't embraced wholly enthusiastically by Romina who's now involved with another guy, Kofi (Ali). On top of that, he quickly finds it tough getting by on minimum wage working as a mechanic for Robin (Mendelsohn). This dilemma leads Luke and his new friend to put their heads together to come up with a faster and more efficient way of obtaining money. 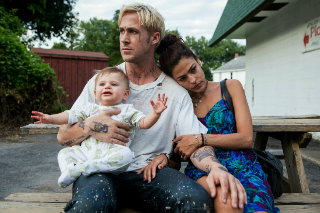 The results of their scheming soon draws the attention of the local authorities and in particular Officer Avery Cross (Cooper), an ambitious former law student and now rookie cop. A decision then made by Luke puts both men on a collision course and triggers a series of events that have repercussions for years to come, and not just for the two of them but on the lives of their sons as well. I'm reluctant to say much more than that to be honest (although even the trailer reveals quite a bit more) but, while it may sound a little unspectacular on paper, it's quickly apparent that's it's much more than that. The film's three acts effectively form separate parts of the story but they're linked together nicely and everything is superbly executed - I haven't yet seen Cianfrance's previous film (the also-acclaimed Blue Valentine), but if this follow-up is anything to go by his style is immensely captivating. 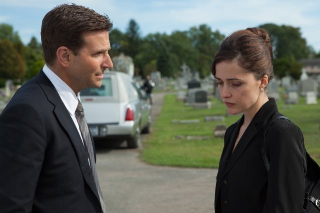 The tracking shot that opens the film, for example, instantly draws you in whilst at the same time doing a fantastic job of wordlessly establishing Gosling's character. Both he and Cooper, as the reluctant hero cop, put in what must surely be career-best performances here too. Add Mike Patton's moody soundtrack to the mix and you're left with a film that's great in pretty much every way. The epic story is riveting from beginning to end and, while some events are more predictable than others, it remains a tale that's masterfully told by Cianfrance. It's a bit of a slow-burner, admittedly, and may not appeal to those used to non-stop action and snappy dialogue, but it's a wonderfully directed and acted film that exemplifies the ripple effect of reckless crime. I may not have known much about it beforehand but I won't forget in a hurry.