My taste in films has always been a bit perplexing, even for me. I often frown upon those visually dazzling films filled with good looking people, special effects, fancy stunts, etc, as they are often the only qualities they possess which makes them rather unsatisfactory, for me anyway. There are occasional exceptions though, and one of them is The Fast and the Furious, a film which one way or another has gone on to have a dramatic effect on my life (mainly because it indirectly led to me meeting the lovely lady who would become my wife!). That's not the only reason though, obviously - most guys like cars and here was a film that not only featured them but had them on an equal billing with the actors!

The result was quite original for an action-orientated film and featured some nice set-pieces, memorable characters, a thumping soundtrack, and some pretty sweet vehicles, as well as some blisteringly fast races and impressive stunts to show them off with. Add a 'new' tough guy, some nice girlies, and a rudimentary story and you were left with a surprise hit! Inevitably this led to a sequel. And then another. And then another, and now we find ourselves awaiting the release of the sixth film in the series (and a seventh has also been announced!). I thought this was a good opportunity to take a look back at the previous five and ramble on about it here.

To that end, I recently re-watched them to help me assemble this list and while doing so I realised that it's a bit of a pointless list really (not unlike many of my Top Fives I guess!). If you like one of them you're probably going to like all of them, and if you don't like one of them I doubt you'll like any of them. They're all slightly different in style but still similar enough that there's little to separate them, frankly. Oh well, here are my largely inconsequential thoughts anyway: 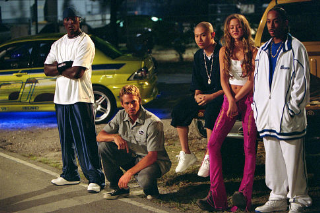 There was no doubt a great deal expected of this film after the surprise success of the original. A glance at the cast list didn't bode well though. Vin Diesel, the breakout star of the first film, had decided not to return and nor had anyone else save for Paul Walker, the weakest main actor from the first film in the view of many people. It suffers a little from the omissions but does introduce some decent new characters in Roman Pearce (Tyrese) and Tej Parker (Ludacris), the former of whom plays an ex-con reluctantly partnering the now-disgraced Brian as drivers working undercover to bring down Carter Verone (Cole Hauser), a scary drug lord. There are some lovely cars on display in this offering which get more attention than the girlies represented by Devon Aoki and Eva Mendes, but the dialogue seems to alternate between amusing and cringe-inducing and the story/action is probably the least realistic of the series so far (which is saying something, I know!). Still entertaining stuff though. 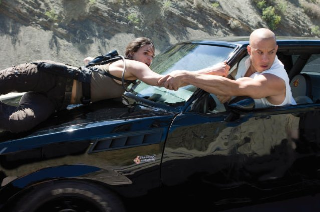 I was greatly looking forward to this instalment as it marked the return of several characters not seen since the first film, and it remains the only entry in the whole series that I've seen in the cinema. I left said theatre rather deflated, however, after another weak story very similar to that of 2 Fast 2 Furious. When it came time to re-watch it for this feature, I wasn't looking forward to it that much, but I actually really enjoyed it this time! The story is instantly forgettable, that remained true, but it's still great to see Diesel, Brewster, Rodriguez, Kang, etc, back in the series, and Brian's back on the force so there's some nice tension between him and Dom too, who each have very different reasons for going after drug-lord-of-the-week, Braga. Only one new character of note is introduced who comes in the seductive form of ex-Mossad agent, Gisele, and the cars take a bit more of a back-seat to normal, but there's some great action scenes here including the long-awaited rematch - Brian vs Dom! It took two viewings to grab me, but I'm glad I gave it another chance. 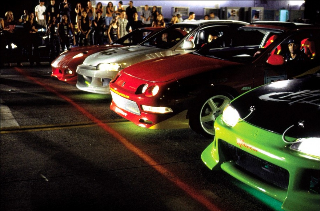 This pesky film has got a lot to answer for! As well as indirectly prompting the aforementioned union, this series début thrust the whole street racing culture under the spotlight, introducing it to many and popularising a good few aspects of it. A little of its appeal was down to some good casting but it was mostly thanks to the many gorgeously modified 'rice rockets', the racing (including the innovative effects for the NOS shots), and most of all the stunts - the mere two-second flash of a car swooping under the trailer of a 'semi' in the trailer sold the film to most people! It might be fairly typical Hollywood gubbins with a more than familiar story beneath all the shiny paint-jobs and cocky attitudes, but it's all done with the kind of style that not only makes it thrilling to watch but also makes you want to actually be a part of it, even that 'snowman' Brian! I still want that orange Supra too. Wouldn't say no to Michelle Rodriguez occupying the passenger seat either! 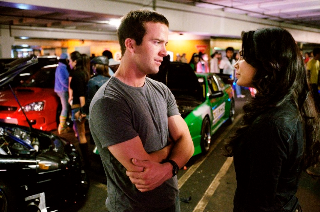 I'm confident few, if any series fans will agree with the lofty position I've put this entry in, but there are several reasons why, until very recently, it was my favourite film in the series. Firstly, it was set in Japan which automatically made it awesome. Secondly, however, it features what is in my opinion the best actual racing of the whole series including a pulse-quickening chase through the crowded city streets (and tunnels) of Tokyo. Whatever opinion you may have of this 'drifting' business the Japanese are so keen on, it's surely better then racing for 'ten seconds or less' in a straight line? On top of all that, it's also the only entry in the series that's devoid of any 'working undercover to bring down evil crime lord' business. Poor old 'Bama boy, Lucas Black, didn't prove too popular as the new (and short-lived) lead of the series, 'teenage' rebel Sean Boswell (he's meant to be 17 but looks every bit his actual age of 24), but he's got some great support, notably from diminutive rapper, Bow Wow, the splendid Sung Kang as the snack-obsessed Han. With Nathalie Kelley and Keiko Kitagawa on eye-candy duties as well, there's not really much here that isn't ace! 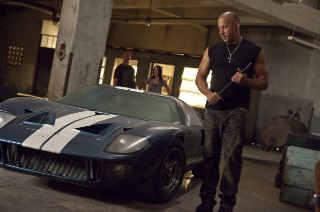 Watching the other four films for this feature was entertaining but it was actually the first time I'd seen this fifth and (at time of writing) most recent instalment in what has fast become a saga. We're back in 'taking down evil crime lord' territory but the style has changed a bit from street racing action films to a heist film which just happens to feature a few flashy/powerful cars. Dom, Brian, and Mia are on the run and end up in the heaven/hell that is Rio de Janeiro where they meet up with an old friend. This inevitably leads to a 'job' which puts them on the radar of evil 'investor', Hernan Reyes, who rules over all the favelas which means he also has hundreds of machine-gun wielding goons in his pocket too. The focus on the actual racing has been toned down here (to the extent that it's the only part not shown when they need to acquire new cars!) but there's a lot more action here than in previous instalments, including an insane chase through the streets of Rio, and a larger cast too, which is almost a 'best of' from previous films! Far from the most realistic film ever but it's a hell of a ride if you turn your brain down! Oh, and The Rock's in it too - sweeet!


Special Bonus! Here's a nice picture of the lovely Michelle Rodriguez, star of the first film and also featuring in the fourth and upcoming sixth films too, looking suitably mean and sultry! :) 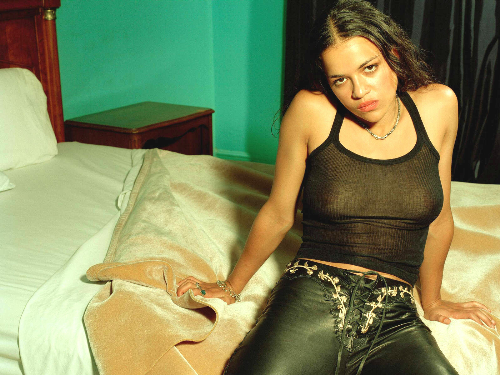