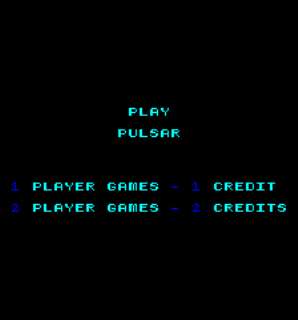 Considering I'm supposed to be a Sega fan, there's an embarrassing amount I don't know about their early years and the games released during that time, and this rather obscure title is a great example of that. I hadn't even heard of it until recently but as soon as I did I sought it out expecting it to be some sort of Space Invaders clone. Happily, I actually found that it's a maze game - a genre on which I'm strangely keen. If there's a story I've no idea what it is - the flyer shows several 'cool dudes' standing around a Pulsar machine while the cabinet artwork shows what looks like that Silver Surfer guy shooting lightning from his hand. 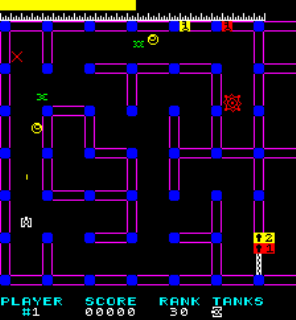 In accordance with none of this, however, the game places you in command of a small tank and plonks you in the bottom-left corner of the first in a series of mazes. They are all one-screen in size and viewed from directly overhead, and the object is simply to reach the exit which is located in the bottom-right corner of each. It is locked though, of course, and standing between you and the keys, which can be found at the top of the screen, are numerous 'Defenders'. There are four types of these - red, yellow, and green ones about the size of your own tank, and a larger, wibbly red thing which is the 'Pulsar' from which the game takes its name. 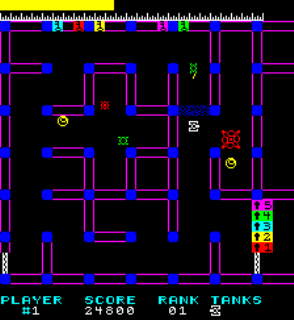 Curiously, none of the Defenders damage your tank by contact alone but all the small ones shoot lasers which cost you a life if accurate. These erratic oafs can be destroyed just as easily by your own shots but the Pulsar takes several shots to put down, and when you do it splits into six of the small enemies! It's not mandatory to destroy any of them but they do obviously get in the way of your objective - namely the keys. These must be collected and taken to the corresponding lock one-by-one. There are two colour-coded locks on the first stage, then three on the next, up to a maximum of five and they can be unlocked in any order you like. 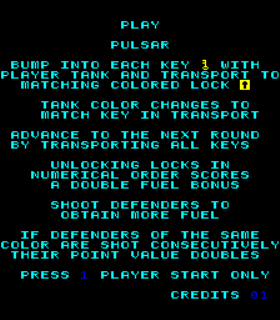 If you open them in the numbered order, however, it earns you a bonus at the end of the stage. Also, while you're in possession of a coloured key, your tank turns that colour - if you then shoot an enemy of the same colour you'll get a bonus for that too! It's all fairly standard stuff so far, admittedly, but the most interesting thing about Pulsar is the way the mazes are constructed. Each features a seven-by-seven grid of blue columns (or posts or something) between which sections of wall span. However, these sections of wall are constantly changing - they appear and disappear regularly as you play which makes finding your way around considerably more difficult as you might expect! 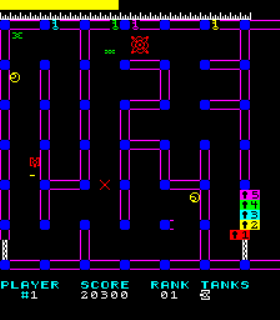 Some of the gaps between posts are spanned by force-fields too. These merely stop you in your tracks if you run into one but if it appears on top of your tank, it'll be destroyed. As if all this didn't already make conquering the stages tricky enough, you also have a finite (and ever-decreasing) supply of fuel. Taking out the idiotic Defenders tops it up a little but you still need to move quickly. Any fuel remaining at the end of a stage is totted up and bonus points are duly awarded. Interestingly, the game also features an in-game ranking which shows your current position on the score board, so there's even more incentive to go after those bonuses points, hi-score chasers! 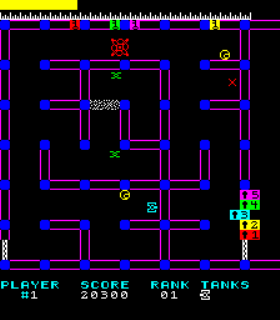 Technically, Pulsar is pretty average for its day - the mazes are presented in coloured vectors but each looks the same aside from the differing wall positions and there's no music at all with the audio represented only by a couple of sound effects (one of which is the constant clanging of the walls moving which is... spooky). Thankfully, the repetitive aesthetics do little to hinder enjoyment of what soon turns out to be a surprisingly addictive game. The going does get very tough very quickly but, despite ever-faster enemies and more numerous force-fields, it's not an unfair game - your tank only takes up about a third of the width between walls and so do the normal enemies, so when they shoot at you it's almost always avoidable - in theory at least! That's what makes Pulsar so addictive though - the knowledge that your failure was your own fault and if you have 'one more go' you can improve your score. It was a common lure of many games from that era but most of those are famous and revered; Pulsar, for some reason, is not. A lost classic? Possibly, but it certainly deserves more attention than it's received at the very least.