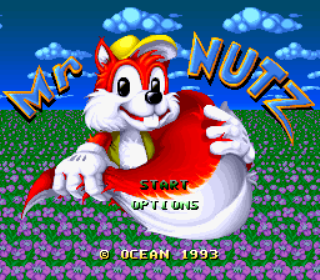 As far back as their very earliest days, most platform games have been based around a hopefully-appealing character, and after the success of Sonic many of these characters were cutesy anthropomorphic animals as you might expect. This particular game, which was first released on the SNES before receiving ports to the MD and GB, was one of many that featured such a character. He's called Mr. Nutz, he's a squirrel, and there's not really anything exceptional about him. Indeed, immediate impressions of the game are that it's nothing more than a generic bandwagon-jumper-onner. Even the story is rather yawnsome - apparently an evil yeti called Mr. Blizzard is trying to take over the world by freezing it. Mr. Nutz's mission is to stop him. Via some unspecified means. That's it! So, with an unspectacular (albeit cute, as was necessary at the time) main character and a story so uninspiring that I feel embarrassed using that word to describe it, the game has got its work cut out if it's going to impress anyone.

These are six themed worlds for Mr. Nutz to conquer before he gets to smack up Mr. Blizzard and they're each divided into several stages. The first world features, unsurprisingly, a lush grassy woodland theme and is named Woody Land. The others are also themed and are called Adventure Park, Living Room and Foul Kitchen, Volcano Underpass and Clouds, Mean Streets, and Ice Cream and Frozen Nuts. To help him on his journey, Mr. Nutz has few squirrel-like abilities - he can't climb stuff or make any funny squeaking noises for example - but he does have a few talents less commonly associated with rodents such as walking/running on his hind legs, wearing a baseball cap, swimming underwater (apparently without need of air), and throwing stuff, the latter of which is one of his three forms of attack. To do this, though, he needs to collect acorns which, instead of being hoarded in a burrow like a normal squirrel, are lobbed at... well, anything you like really but it's best to direct them towards the numerous enemy creatures.

These idiotic minions of Blizzard are unique to each stage and are usually appropriate to its theme as well. Woody Land, for instance, features the biggest range of them and includes walking fruits, hornets, venus fly-traps, caterpillars, spiders, fairies, porcupines, and several others. In addition to lobbing acorns, most of them can be defeated by jumping on them as well (not the porcupines though - eeek!), or by a swish of the tail, and the exit of each world is guarded by a boss who each have their own energy bars which are substantially larger than that of Mr. Nutz. Acorns are the most numerous items to collect but each world also houses extra energy and lives, as well as a sizeable quantity of coins which earn you bonus points. You can choose how much energy Mr. Nutz starts with via the options screen but the default is three points. Touching an enemy obviously costs you one of these and so do the numerous traps and hazards which include spike pits, electrocution things, and lava as well as the usual less dangerous features such as swings, springers, and moving platforms.

Most of these things merely prove an inconvenience though, the main challenge comes from the many enemies. There are a lot of them and many of them regenerate if you decide (or are forced) to go back to a previous area, even if it's just a screen or two back. This wouldn't be so bad if it wasn't for two things. Firstly, the collision-detection is a bit iffy - not too bad but just off by enough that I was never fully confident with it. Secondly, enemies are almost all mobile, as in most games I suppose, but some have unhelpful movement patterns or offensive/defensive abilities which, when combined with the first problem, means it's very easy to lose energy. On top of that, the stages (which are called 'Journeys', by the way) start off fairly large and can reach pretty enormous proportions later in the game which, when combined with the total lack of any passwords or save facility, means an epic slog is required to reach the end of the game. However, the big question I found myself asking... ummm, myself while playing is: could I be arsed?

Talking of arses, perhaps I'm starting to make Mr. Nutz sound like it sucks some of them, so let's move on to the good stuff which, as you may have already noticed, includes the aesthetics. The graphics have something of an Amiga-esque quality about them, which is ironic since it didn't receive an Amiga release (although a spin-off did later appear on said machine), but they're really rather nice. The scrolling is nice and smooth, the backdrops are mostly lovely, sometimes having a bit of a matte painting feel about them, while the foreground graphics and scenery, which initially seem to vary little (the first and second worlds are quite similar), is superb on most stages, particularly the close-up world of the kitchen in world three, the volcano of the fourth world, and much of the final world. Perhaps even more impressive are the sprites. Their design varies between average and great but they're mostly animated very nicely (especially Mr. Nutz himself of course, who even has an obligatory 'over-balancing' animation), but the sheer number and variety of them exceeds probably any platform game I've played!

Every stage has unique enemies - some are tiny, some are much bigger than Mr. Nutz - but the total over the whole game must be in the region of fifty different characters! There are also some nice graphical touches such as the stages that comprise the first world which take place at progressively later times of day (with the last at night). The quality of the audio is a bit more inconsistent - some worlds have memorable, catchy tunes, but others are almost unnoticeable. Visual treats, though, are not enough to keep me playing by themselves; that requires well-designed stages and enjoyable gameplay which, on paper at least, Mr. Nutz could well have. As mentioned, the stages are pretty big and, although at first they do just seem like normal left-to-right affairs, before long it becomes apparent that they're a bit more involved than that. Many incorporate some slightly puzzley elements or ask you to locate certain items before allowing you to progress and there are frequently branching paths too. Sometimes one direction leads to a cache of acorns or coins but other times it offers an alternate route.

Fortunately there's no time limit either, so you can explore and experiment as much as you like, but those many and varied enemies with their unreliable collision-detection take their toll and the stages aren't always designed in the fairest ways either. Many stages force you to climb up very high by way of small platforms (such as tree branches) meaning it's easy to fall and lose much of your progress. There are also often sections where energy loss is unavoidable such as dangerous gaps that are just too wide to jump or enemies/projectiles that hit you as soon as you see them. Of course, it doesn't help that you're sent back to the back to the beginning of a stage when you lose a life, especially given how long some of them are. Trudging back through a stage that was a pain in the arse to begin with can be a bit of a chore and if you do finally finish them, your energy isn't even replenished for the next one! So, to sum up: Mr Nutz is a big game and it looks nice, but it's also difficult and often unfair, and therefore frequently annoying. It seems to have many of the ingredients of another enjoyable cutesy console platformer, but it just ends up being too frustrating. I imagine I would've gone through a good few SNES controllers if I'd had this back in its day...