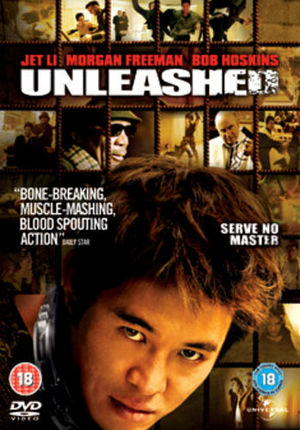 Just a few months ago now the film world was robbed of Bob Hoskins. The many resulting tributes and obituaries mentioned numerous films he'd starred in such as The Long Good Friday and Who Framed Roger Rabbit but I didn't once see this film mentioned. He's isn't really the main star, admittedly, and the film was hardly a global mega-blockbuster either, but Unleashed has long been one of my favourite films to feature The Cockney Cagney. Unsurprisingly, he plays the part of a ruthless British loan shark and gangster known only as Bart who, along with his cronies, are largely seen collecting their payments from oft-problematic clients. Bart's solution when they are reluctant to repay him? He 'unleashes' his human attack dog, Danny (Jet Li), who's a gormless, stumbling oaf... until his collar is removed and all hell breaks loose! 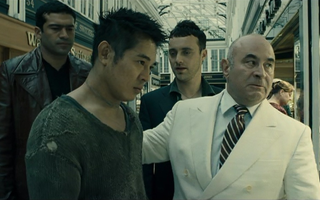 This simple act alone is enough to turn Danny from an apparent simpleton into a manic, relentless, arse-kicking machine, and also the most useful bit of muscle anywhere in the East End and beyond! He is literally treated like a dog as well though - he's locked in a cage, has no possessions, and even eats with his hands from a tin can. It's almost fortunate for him then, that a disgruntled recent client of Bart's ambushes their car. Believing himself to be the only survivor of the assault, Danny heads for a warehouse he had previously visited with Bart where he encountered Sam (Freeman), a blind piano tuner living in London. Sure enough, Sam is there again and takes Danny back to the apartment he shares with his stepdaughter, Victoria (Condon) where he starts a new life with his newly-adoptive family.

As you might imagine, this means Unleashed is a film that combines two very different styles. The first act features mainly nefarious characters and lots of violence as Danny beats the crap out of lord knows how many of Bart's clients, while the second mainly consists of the kindly Sam and enthusiastic Victoria attempting to coax Danny out of his shell and find out where he came from. Unsurprisingly, Jet Li didn't have to remember too many lines of dialogue, with his fists doing the talking for much of his screentime, and his performance in these scenes is quite different to the graceful, flowing techniques we usually see him employ. Danny literally fights like the animal he's been raised as, but that doesn't make the often-hectic action any less entertaining. That's a given with any film bearing his name though - what's more surprising is his performance while under the care of Sam and Victoria.

Freeman is pretty much on cruise control here but that still means he's as watchable as always and Condon is very lovable as the cute 'n' chirpy Victoria. They quickly become attached to their shy, nervous guest who Li does a great job of portraying, and it's hard for us viewers to not care about all three of them. As for the late Mr. Hoskins... he's played this kind of character before - he's good at it and that's no different here. Bart is a bit of a bastard at the start of the film and I don't think it's much of a spoiler to say he turns up again wanting his prized pet back, so you'll be hoping he finally gets his comeuppance, especially when he gets Danny involved in the underground 'to the death' fighting tournament they managed to shoehorn in here! The mixture of styles certainly makes for an interesting film though, and it's one I always enjoy it a lot.