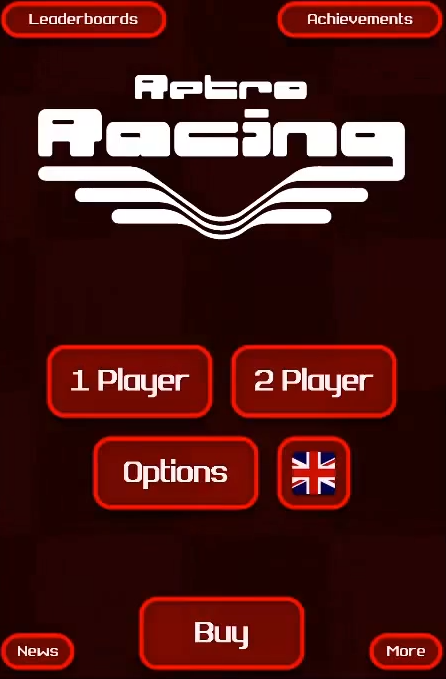 I've never really been too concerned about phone or tablet games and, accordingly, not too many catch my eye, but one genre that always gets my attention is that of overhead racing games. This particular one was made by Mr. Qwak, a.k.a. Jamie Woodhouse of Qwak fame (in case you hadn't guessed!) who also happens to be behind Nitro and ATR which are... you guessed it, both overhead racers! Unlike both of those efforts, however, Retro Racing is based on F1-style racing, albeit in the kind of unrealistic arcadey way you might expect.

Before starting you get a choice of three brightly coloured cars (with three more becoming available later), each of which are rated based on their speed, acceleration, and tyres. Then it's on to the first in a series of 18 small but increasingly complex circuits as one of eight hopeful racers. 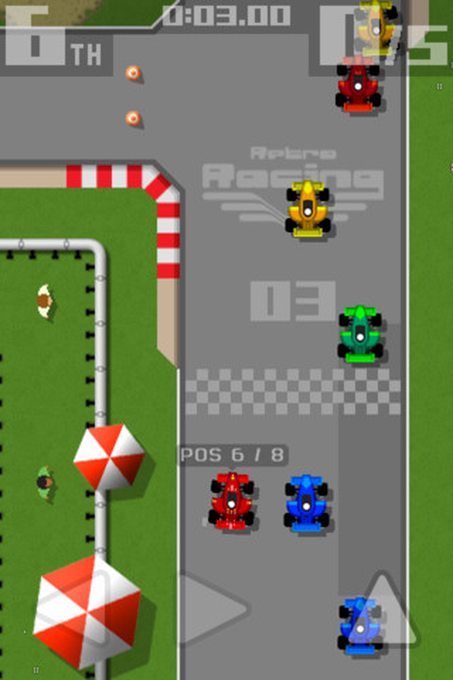 Progression from one to the next is possible only by finishing in third place or higher and, shockingly, you start at the back of the field. It's not usually too hard to make up places though, particularly around corners as the cars are quite slidy which means you can often cut the corner, assuming you time it right of course! However, like most similar games, it's equally possible to mis-time it and get stuck on a barrier or roadside object of some sort.

Considering most races last for little more than a minute, making up for errors like can often require more than just skilful driving. Happily then, each circuit is littered with lots of power-up icons which will boost your speed, acceleration, tyres, or give you a brief nitro boost. As well as being numerous, these icons also respawn after a short while too, so there's no excuse to be finishing last! 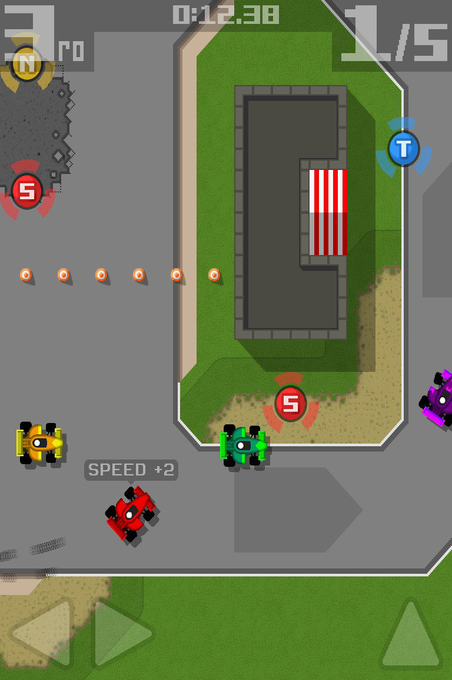 Whilst fairly prevalent over just about all parts of the circuit, the power-ups are also often grouped down side-roads or somewhere else out of the way, and the decision of whether to lose a little time going after them is about the only strategic element to an otherwise very arcadey game. It's also a vibrant affair featuring smooth, colourful graphics, decent music and effects, and generally great presentation all round.

The main point of concern for me prior to playing, however, as with many games on these mobile devices, was the controls. Here they are at least simple. There are three on-screen 'buttons' - one for left, one for right, and one for accelerate (no brakes - eeek!) and, while it's always possible to 'miss' a button (especially with the split-screen two-player mode, although it's impressive that it's even been included I guess!), it works pretty well for the most part. It's a shame there's no 'tilt-steering' option but that's about the only complaint I have with Retro Racing which has proven surprising enjoyable and addictive. As mentioned, the circuits get more and more complex and later ones features lots of short-cuts, split paths, obstacles, and even off road sections, but their short nature makes this the perfect game for quickie sessions (giggity). There's not really any original ideas here but Mr. Qwak's effort is good fun and great value, and therefore comes highly recommended.

Special Note: It's worth pointing out that I did actually buy this game soon after I downloaded the 'free' version (which, unlike most such Android releases, has no ads but keeps about three-quarters of the game locked). This made it my first ever Android purchase in fact (!) but the title screen above (for the free version) is the only one I could find online :(