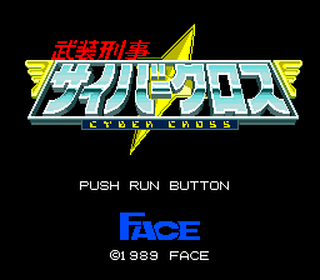 When most of us Westerners think of superheroes our minds instantly go to one of the assorted bunch offered by Marvel or DC, but our Japanese friends are rather keen on their own brand of heroic saviours. This PC Engine exclusive stars one such hero whose exploits are inspired by the mighty Super Sentai series (on which the Power Rangers are based). His name is apparently Cyber Cross and the ghastly foe to befall him for the duration of this adventure is known as Dr. Nozumi (another supervillian with a doctorate, it seems!) who has unleashed an army of insectoid monsters from outer space - oh noooooo! They have reportedly infiltrated the entire globe but our hero only has to clear their filth from six side-scrolling stages. The first takes place in some city or other before subsequent stages take in a park, a rail yard, a rocky ravine, and a forest, before moving into more dangerous underground complexes and enemy installations and ultimately the final showdown.

Each of the stages features infinite weedy enemies with the main objective being to reach the end within the time limit. Here, one of Dr. Nozumi's more powerful minions awaits, most of whom seem to be humanoid animals (frog, rabbit, elephant, etc). Smacking up the normal enemies is merely optional, although it would probably be more trouble than it was worth to try to actually avoid them so you might as well give as many as necessary a good kicking! To that end you have limited options... to start with. You begin the game, you see, as a mere normal blue-haired dude who looks like he's just out for an evening stroll or something, and his offensive repertoire in this guise consists only of a punch, kick, and a near-screen-high jump. Fortunately this is enough to despatch most of the idiotic creatures that sweep across the screen mindlessly, but amongst them now and then is a floating capsule, and cracking this open gives you a few more options.

The contents of these things can include an energy top-up, a time extend, or gems for bonus points, but the most common items are three different coloured power-ups - red, green, or blue. Each of them encases our hero in a power-suit and bestows upon him some extra abilities. The red 'Sun Shield' beefs up the power of your punches and kicks and gives you a lightsaber (complete with Star Wars sound effect!), the green 'Moon Shield' gives you a boomerang (poor range as standard but can be charged up to fling it further), and the blue 'Star Shield' gives you a good old-fashioned blaster which can also be charged. It's not quite as easy as it might sound though. You get a reasonably long energy meter anyway, but once you're suited up you can take three additional hits (which can eventually be increased to five) represented by black hexagons on the status panel, but once these are all gone you can no longer use any charge attacks.

Not only that, but if your energy meter falls into the red zone you'll lose the suit altogether, reverting back to regular dude. Luckily the suit icons come along quite often and each one will fully restore your charge attacks as well as increase your energy slightly. Most enemies can be taken out with a single hit from any of your offences but they are unrelenting in their numbers, appearing from both sides of the screen pretty much constantly. At first there are two types - generic soldiers or flying bugs which cause damage only by touch, but they have less common equivalents who shoot at you or drop bombs respectively, and other insectoids soon start appearing such as rolling and wall-climbing varieties and several other uniquely irritating types. All the action takes place on a single plane but most stages features several two-tiered sections which it's easy able to jump up and down between, and this certainly helps manage the onslaught, but there is a problem.

Games like this, ones with so many enemies to take care of, require extremely responsive controls and precise character movement, and it's in this area that Cyber Cross is lacking. Moving our hero around feels a bit stiff and he just doesn't respond quickly enough much of the time, whether that's trying to duck or jump an attack or simply aiming an attack of his own at an oncoming enemy. It's particularly noticeable when you've got a long range attack available (such as the blue suit's gun) as the enemies often approach you much faster accordingly. It's not cripplingly bad but it is enough to prove frustrating. Apart from that, though, this isn't a bad game at all. The stages get more interesting as you advance through them and it provides a good challenge too - your energy meter is pretty long (although annoyingly it isn't replenished after a boss fight) but you only get the one life so it'll take a good while to get all the way through, especially the boss rush on the final stage!

Aesthetically the game is a bit of a mixed bag. The graphics are quite good - certainly not the finest we've seen the Engine produce but fairly bright and colourful for the most part, but the audio is more disappointing. The effects are few and very quiet while the music, which isn't bad at first, is repeated on every stage and therefore gets tiresome quickly. The game itself is quite enjoyable, mainly thanks to the three splendid power-suits (my favourite is the red one as the lightsaber... sorry, plasma sword, slices enemies above you as well as in front of you!) which definitely prove to be the main reason the game stands out, and should also ensure it appeals to fans of this type of Japanese superhero (or the Power Rangers I guess). If the controls and character movement were tightened up a bit, Cyber Cross would be a contender for the best game of its type on the Engine (and there are a good few examples) but as it stands it may prove a touch too irritating for some.