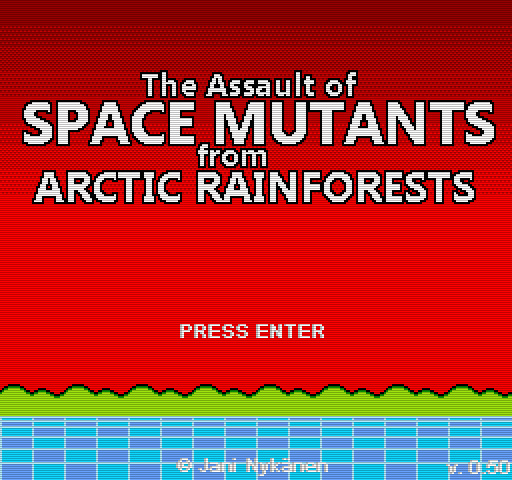 I'm sure by now many of you have heard about those game-making contests that some websites hold. They have become very popular in recent years and one example I stumbled upon not too long ago is called NESJam. The rules were simple: games must be made by just one person from start to finish within a week and they must be made in the style of an NES game (resolution, colour pallette, etc). One of the most eye-catching entries I saw, probably at least in part because of its amusing name, is this one which was made by a talented chap called Jani Nykänen. 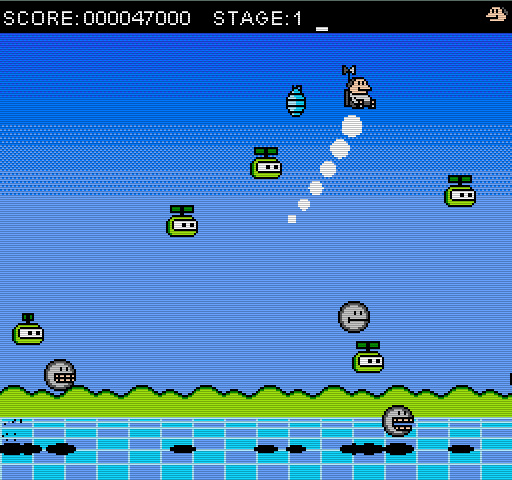 It's a predicably simple game then, a single-screen shooter no less, which casts you as 'Sir Bernald Blackbourne' whose job it is to rid Earth of an army of scary space monsters led by the 'evil lord of evil evilness'. He does this by using a spiffy jet-pack as well as two attack options - bullets, which are 'thrown' in an arcing motion, and bombs, which are dropped directly downwards. There are five stages altogether, the first four of which feature a seemingly infinite number of enemies before a boss battle while the last consists of an epic confrontation with the final boss. 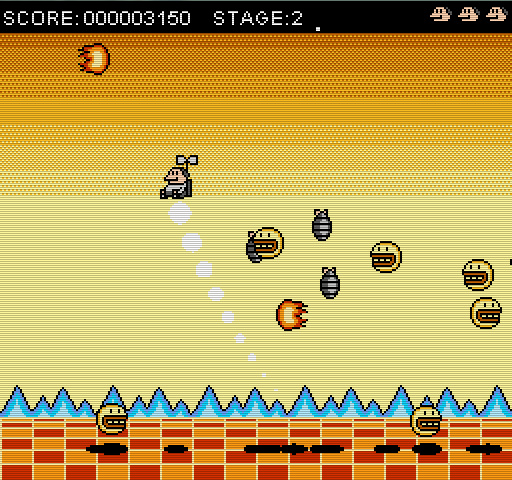 Sir Bernald starts each stage with five hit points and is affected by gravity so continual thrusting (giggity) is required to keep him airborne and dodge/shoot enemies, but both weapons are unlimited and you also get an upgrade after each stage (eg, double shot or bombs), and there's also a score multiplier. And that's about it! It's an impressive game considering the short development time though, of course. There's not much sound (just a couple of effects) but the floaty, bouncy sprites and bright colours are particularly appealing (although they're not really the 'usual' colours associated with the NES) and the stages can get quite manic towards the end, with several types of enemy joining in the assault simultaneously before the larger boss arrives (the final boss is almost screen-sized!). It could do with a little tarting up in some areas (and apparently more stages and/or features will be added at some point) but this splendidly-named game is good fun, pretty addictive, and ideal for the odd five-minute high-score attempt. Thanks, Mr. Nykänen, for a memorable freebie!