Well, it's unintentionally been a while since I took a look at TNG's fifth season and it was probably the hardest one so far to narrow down to a mere five episodes. That, however, has now changed as this sixth and penultimate season has proved even more difficult. Admittedly, there isn't really many all-time great Trek episodes here but there are a lot that I personally find memorable and enjoyable, and accordingly I couldn't decide which ones to leave out.

Some that didn't make the final cut include the latest zany adventures of the amusing Lieutenant Barclay who is scared of creepy crawlies he swears he can see during the transportation process, another 'transporter accident' episode which sees Picard, Ro, and Guinan revert to childhood (am I the only one who'd like to slap the youthful version of Picard?), and near the end of the season the crew even discover a duplicate of Riker which was created some years earlier by... you guessed it, a transporter accident! Our heroic, chair-vaulting Commander also manages to go insane while performing a play, but slightly less disturbing is Data looking out for a bunch of floaty robots who may or may have become sentient and, in another episode, practising his small-talk to hilarious effect while the Enterprise is subjected to a 'baryon sweep'.

We also have the great honour of meeting legendary Klingon warrior, Kahless (or a clone, at least), as well as some creepy clicking aliens who have been busy kidnapping the crew at night and performing experiments on them, and a young girl who is apparently a 'new' member of the Q Continuum (I don't usually like Q episodes much but this one is good). Another episode I like has Picard, Data, Geordie, and Troi returning home in a shuttlecraft only to find the Enterprise frozen in time (mid-combat) along with a Romulan Warbird! There's also a bit of romance here and there. Geordie falls for a dead girl while Picard falls for an underling (which is actually a great episode for a love story - not generally Trek's forte), and of course, which teenage boy (as I was the first time I saw it) could forget the episode where Troi is getting all slutty and shagging half the ship?

Probably the last episode of note, other than the five featured below of course, sees Picard's old archaeology professor visit the Enterprise with a mystery which soon all the major races in the area are chasing along with Picard. Most of the episode is great but the revelation at its climax always seemed to be a bit of a cop-out to me - basically a way of justifying the generally poor quality of the alien make-up throughout most of show's run. I'm sure some fans will still decry its absence from the selection below though, and talking of which, behold: 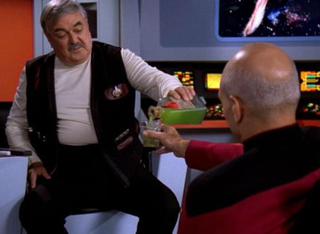 Well, we've had Bones (briefly) and Spock (not at all briefly), so now it's Scotty's turn to have a TNG episode! He turns up in a transport ship that crashed into a 'Dyson sphere' 75 years earlier where he's been stuck in a transporter beam ever since (yep, it's that ultra-safe device, yet again). Much of the story is taken up by Scotty trying to help out in engineering, realising his skills are out of date (and it's not particularly nice seeing Geordie getting annoyed with him for being in the way), and then moping around and reminiscing about the good old days, but hey - it's always great to see Scotty again! The backdrop to all this merriment is the Dyson sphere on which his ship crashed, and it's a pretty mind-warpingly amazing concept (though not very realistic - it's an enormous hollow sphere which completely encases a given star, thereby capturing all of its energy), but there's probably only one reason most will watch this episode anyway. 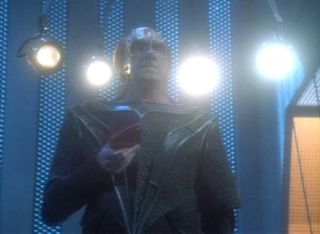 One of four two-parters that occur partly or fully in season six, this is probably the best of the bunch if you ask me. It starts with Picard being replaced as captain of the Enterprise by Edward Jellico who's tough, uncompromising, and a bit of a bastard if truth be told, who rubs Riker in particular up the wrong way. Picard, meanwhile, has been sent on a covert mission in Cardassian territory with Doctor Crusher and the mighty Worf. Sadly, it turns out to be a trap and Picard is captured by some unpleasant Cardies who are trying to get information on Minos Korva, a tactically significant Federation planet, and it's information they are apparently willing to torture Picard for. Back on the Enterprise, Jellico is being as much of a pain in the arse to the Cardassians he's meant to be negotiating with as he is with the crew, and has instead decided to take something of a more militaristic approach to the problem. You might want to punch Ronny Cox (Jellico) but it's a gripping pair of episodes to be sure. How many lights are there again, Captain?

Face of the Enemy (Episode 14) 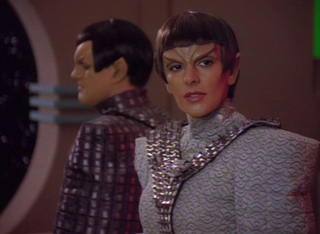 Poor old Marina Sirtis. Saddled with arguably the least interesting of the characters and the only crew member to have her various 'areas' shown off nearly constantly for our viewing pleasure, it must've proved slightly irksome for her, but she gets a rather good episode here. It begins with her waking up on board a Romulan Warbird, apparently having been brought aboard by a Romulan officer to pose as a Tal Shiar agent with the aim of helping him smuggle a secret 'package' into Federation space. Unfortunately for Troi, however, he's the only one who knows her true identity, and that requires convincing the already suspicious captain of the ominous craft. It's probably not an all-time great episode to be honest but even if nothing else it's just nice to see our curvy counsellor getting something to do other than look hot or say "I sense deception, Captain". 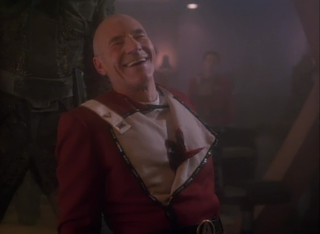 Okay, so I know Q is really popular but I've never really been a fan of many of the episodes to feature him. This, however, is one of the few I do like, partly because it's also a Picard episode, and we all know how much Captain Picard rules. Here he sustains a blast to the chest and soon afterwards finds himself in the afterlife with our favourite omnipotent oaf as his guide (kind of). It turns out he has died because his artificial heart was shorted out prompting Q to return him to his 'wild' academy days with the opportunity of avoiding the brawl that resulted in a stab through the chest and the replacement heart. Doing so, however, has some slightly unexpected results. It's certainly not a typical Q episode, with his usual irritating tomfoolery largely absent, replaced by what looks suspiciously like a genuine attempt to help a lowly human (albeit his favourite one). It doesn't last much beyond this episode though, of course! 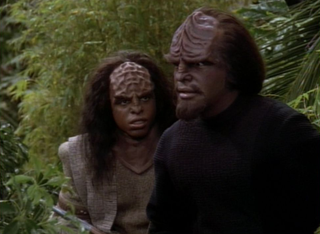 This is the other two-parter that takes place entirely within the season and, while it doesn't really have the same impact as the first one (which was a bit scarier), it does have a few other things going for it. The most appealing of them for me is that it's a crossover episode, and they're always good fun! It opens with the Enterprise arriving at Deep Space Nine to help the Bajorans with some bullcrap, but Doctor Bashir is excited for the opportunity to meet Data who has been having some very strange dreams. Much of the story, however, involves Worf who has heard his father, long believed killed by those pesky Romulans, is actually alive and (possibly) well and being held along with some other Klingons at a prison camp in Romulan space. After briefly hesitating he sets off to infiltrate the camp and rescue his father, if indeed he really is there at all. Despite the splendid DS9 stuff, though, I still almost left this one out in favour of an episode mentioned earlier - it's all pretty predictable for one thing, but as with most Worf/Klingon episodes it's still a highly enjoyable one all the same.

Look out for my Season Seven picks soon!