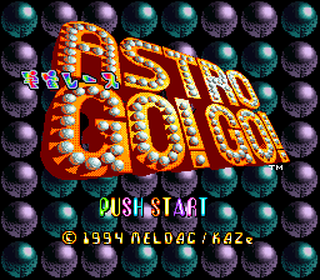 I think it's safe to say by now that even occasional visitors to Red Parsley will be well aware of my appreciation of Nintendo's stonking F-Zero series. I'm therefore quite flabbergasted that the existence of this catchily-named game only just reached me this very week. The reason for my surprise, in case you hadn't already guessed, is that it's a game that has more than a little in common with the classic series, and in particular its SNES debut. It actually appears to have been directly based on Nintendo's game as far as its visual style is concerned but it doesn't take long to realise that it's quite a bit weirder than its source of inspiration too. Lord only knows what the back-story could be - the game is a Japanese exclusive (although a US version was planned) so I don't have the luxury of reading the instructions - but the first thing I thought of while exploring it was... F-Zero meets Fantasy Zone! That automatically sounds like the greatest thing ever, so let's hope for the best.

There isn't any shooting involved but there are many bright colours and several peculiar characters including a choice of five to play through the game as, each with their own (very) unique hovercar-type vehicle... ummm, thing. Jet is a human male who pilots Blueone (a dolphin or shark or something), Baribroon is a skeletal creature who pilots Barivehicle (which looks much like its owner), Flyhigh is a purple creature who pilots Cooljam (apparently based on his head), Love is a human female who pilots Lunabee (a pink insect-like craft), and E.O is a green robot who pilots Gyrotype2 (which seems to be based on a scorpion). Each of these unusual craft is ranked by acceleration, braking, weight, top speed, and handling, and can be used in either a fairly standard Time Trial mode or the 'main' mode, the Astro GP, which itself offers two variations - Normal Race or Power Race (the latter just seems to be a more difficult version of the former). Both then offer the same choice of Wonder Cup, Ultra Cup, or Miracle Cup competitions.

Each of the tournaments consists of a series of five races, with the winner obviously being he who has amassed the best overall results. However, you need to finish in at least third place to even continue on to the next race. Failure to do this will cost you one of your lives and is in fact the only thing that will cost one. Indeed, all the craft are seemingly indestructible and if you fall off the side of the course you're always winched back on. Your chances of winning will then be severely diminished but you'll never lose a life. Once a lap you're awarded with a super-boost or a shield but aside from that it's simply a case of steering around the unusual and highly challenging courses. Therein, however, lie a few problems. The controls baffled me initially but I quickly realised that, unlike F-Zero and indeed most other racing games, pressing left and right doesn't just steer a little bit in the respective direction - here it actually rotates your craft indefinitely in the given direction.

This basically means you could go round and round in circles, almost on the spot, if you so desired, and it does take a bit of getting used to. None of the craft drift or skid around like those in F-Zero either, but they're not too bad to race with after a while. No, the biggest problems are with the design of the courses themselves and the way they are presented. As you may have noticed from the screen-shots, the 'camera' view is rather restrictive as it points down at the circuit much more than with most similar games, cutting off the horizon in the process. This was presumably done for technical reasons, perhaps to avoid the need for a long draw-distance, but it also means you can't see very far ahead. A further problem with the camera is that it doesn't turn left of right with your craft or create the illusion of doing so by rotating the course around your craft. This means that when you turn a 90° corner you're moving from left to right or vice versa, and if you end up taking a 180° corner you'll be racing toward the camera!

This might sound like good exciting racing fun but it's actually pretty ridiculous most of the time. Much like with F-Zero, there are several courses based in a handful of themed locations (with names like Sweetcat Lake, Pinball Colony, Air Station, and Icebaby Planet) and they have familiar features like jumps, slow-down patches, and speed boosters, and at first all seems well. The very first course, for example, is a short and simple affair with just a few slow-down areas and a section which sees you hopping across several small islands. It's nothing too special but it looked like a promising start for the game, but subsequent efforts quickly became much less enjoyable. The sharp turns get more and more common and some of them have boost plates immediately after them meaning you could be sent hurtling sideways or even towards the camera at high-speed with no way to know what was coming, and some abruptly encountered mysteries could include another sharp turn or a section without barriers meaning a time-consuming plunge into nothingness.

Another problem that makes this even worse is making contact with barriers or any of the other racers. More often than not, if you do this at a fairly slow pace you'll stop dead with your craft facing in the wrong direction. No major dilemma here - just turn it around and get going again, albeit probably in last place. However, doing so at high speed will see you bounce off the obstruction at an equally high speed in the wrong direction which could mean either a period of intensive bouncing back and forth or simply travelling the wrong way. In either case, wresting back control of your craft isn't easy and any chances of winning a race will have most likely disappeared too. I would therefore say that it's largely pointless using a manual boost or passing over the boost plates as well, as the resultant speed increase will usually see you ricocheting all over the place or hitting an unavoidable obstruction, and may even leave you further back than when you started, but if you do avoid using them you won't have too much chance of winning the race either.

Even without all this stuff, though, this still isn't an especially easy game as there doesn't seem to be a great deal of consistency as far as the other racers are concerned. You could be zooming along thinking you're doing quite well and then suddenly one of two of them will inexplicably zip past you! It can also be really difficult to beat the fastest craft (the Barivehicle) which pretty much means you'll need to race with it which is a pain in the arse (it has hideous steering and acceleration). I think all you can do here really is hope for the best! I suppose it's possible that I'm taking the game a little bit too seriously - it's quite clear from the graphics and general weirdness that it's intended as a bit of light-hearted fun and, aside from the foreshortened viewpoint and a rather poor sense of speed (except when you're being pinged around like a pinball of course), it is quite a nice-looking game too, in a pixelly Mode 7 kind of way. It's certainly colourful, garishly so at times, and there's a decent amount of detail on the circuits, and the music is mostly quite nice too.

Overall though, this has been a big let-down for me. Aside from some initial confusion over the controls, first impressions were great. I like weird, cute games and I definitely like F-Zero, so I was over the moon to have discovered what appeared to be a combination of both, but my excitement was soon replaced with disappointment and anger. Now, after having spent a fair amount of time with it, I'm sorry to say it's probably the most annoying racing game I've ever played. Quite a few times now I've been cruising along in first place, taking the corners gracefully and wondering if I've maybe been too harsh, but then a few minutes later I'm tearing my hair out once again! There's not even a two-player mode - at least then both players would be equally disadvantaged. I was really hoping this would be another hidden gem I'd discovered, perhaps even one of my new favourite SNES games, but sadly that's far from the case. There are numerous problems - each on its own would be annoying but together they ruin what could've been a great game. It would've still been a blatant F-Zero rip-off, sure, but it also would've been a wonderfully enjoyable racer too. Oh well...