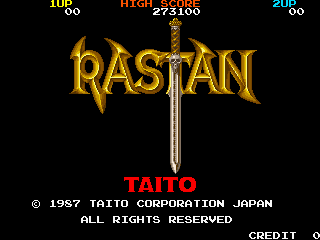 For most gamers the first hack 'n' slash title that comes to mind is Golden Axe but, splendid as Sega's classic is, the sub-genre arguably started even earlier with Rastan. Granted, it may be more of a platformer than a scrolling fighting game but is still contains a hell of a lot of slashing. A great deal of it is done by the muscular Conan-like barbarian warrior of the title who's on a financially-motivated quest to battle through the harsh, monster-infested land of Semia and rescue the king's daughter, perhaps even earning her gratitude into the bargain! Such grand a reward can only mean the job at hand must be a rather tough one though, and that is indeed the case. There are six side-scrolling stages in total, each with two parts. The first of each generally takes place through an open exterior location and/or dangerous rocky caverns while the second is set within a castle or fortress of some kind, at the end of which lies a terrible boss from the netherworld!

The many normal enemies are not really the friendliest bunch either. The first type encountered are the lizard-men which are also the most numerous, but others soon start appearing such as several kinds of skeletal warrior, snakes, chimeras, wasps, amazons, harpies, winged demons, centaurs, super-annoying bats, and even a few mages too. Unsurprisingly, Rastan's primary means of dealing with them is the enormous sword he permanently holds aloft. Some fall to one stroke of its blade whilst others require two or three hits. Likewise, the infinite enemies and their various attacks cost our hero differing amounts of his energy. Luckily some of them drop stuff once their life has been snuffed out in a fiery flash. This includes several gems for bonus points, two potions - a blue one which refills his meter a little and a red 'poison' which costs him some life, and most helpfully of all a Gold Sheep for maximum energy.

There are also several more time-sensitive items to look out for too. Defensive ones include a Shield which reduces damage taken from attacks, a Mantle which halves damage, and Armour (although it's called Armature for some reason) which renders Rastan immune to damage. The offensive collectibles consist of three new weapons: the Axe offers increased power, the Hammer gives increased range, and the splendid Fire Sword shoots fireballs! The only other items are a nice Necklace which awards the wearer with double points and a mysterious Rod (snigger) whose exact purpose is not revealed until it's found. All of these items only last for a short while but most of them are quite common and can be found on most stages at some point. Despite all these helpful trinkets, however, Rastan's adventure is still a punishing one.

He starts with two lives and there are several restart points through each stage so it's not particularly unfair in that way. The problem is the enemies. Even the most basic of them have clubs to whack you with and many others have all the weapons our hero does while some even shoot stuff at you. The main problem is the apparently unlimited numbers of them. Indeed, if you stand still for any period, they will continue to pour onto the screen, from both sides where possible too, so it's probably a very good idea to keep moving. Semia may well be a "savage land ruled by cutthroats and villains" but it gets a bit much sometimes! Not only do their numbers make the game a lot harder but they also render the scoring system meaningless. This is the only problem really, though, in a game that was pretty original and innovative for its day as well as distinctive. The music isn't great but the graphics hold up quite well and include some great backgrounds and foregrounds.

Among them are the splendid rocky caverns here, some superb fire effects, and the first stage even 'borrows' the Argonaths from LOTR! The sprites are just as good too. Rastan looks suitably heroic, even in death, and the enemies are well drawn - ghastly monstrosities they may be, but that's the point right? You could argue that there's a lack of variety in the visuals generally, but it's a pretty atmospheric game all the same, with all the stages portraying the fantasy world in which they are set as well as could be expected. They are well designed for the most part too. Some have a forked path or two here and there, for example, albeit very short ones which usually just give you the choice of moving above ground or underground for a screen or two, but it's more than most games of this type offer, and there are plenty of hazards as well.

Things like tumbling rocks are quite common and there are also parts featuring fatal liquids such as lava and water, the latter of which, in the best traditions of video games, is just as dangerous as the former (chortle), and both of them can be a pain to avoid whist fending off multiple enemies. Before long you'll also find spikes rising from the floor or falling from above and there are some awkward slippy downward slopes, usually with helpful fire pits or something midway down them. It's not just running and jumping that are required either. Rastan can perform high jumps, climb and swing from ropes, and attack immediately above or below himself (whilst jumping) as well. It all makes for a rather interesting game and one that's definitely never boring, but does it deserve its enduring fame? I would have to say yes. It's a bit too tough for my tastes and I doubt I'll ever see it all (you don't even get unlimited credits) but this iconic 80's character and his game are classics for all the right reasons.